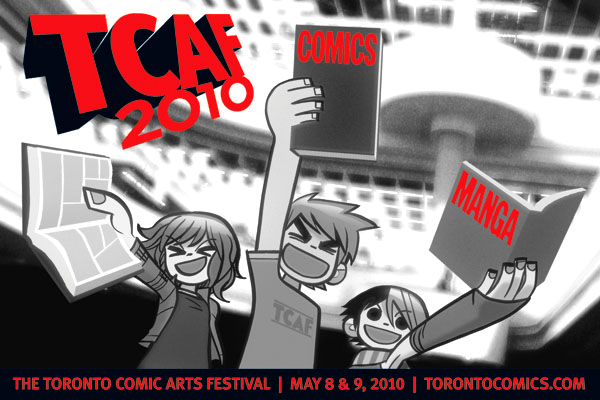 I’ll be honest with you; I hate conventions.

Maybe it’s because I’m usually working them and that in and of itself is usually an ordeal. Maybe it’s because there are throngs of people all trying to go in the same direction in usually poorly laid out aisles.

Maybe because it was my first ‘comic convention’ that it coloured my personal dislike of the convention scene, but TCAF is my favourite comic event of the year.

There’s something totally different about the feel of TCAF. There’s a wonderful sense of camaraderie and excitement in the air.

Everyone who is there is there because they believe in comic books as a medium.

There’s lots of people that I got to talk to and those interviews are going to be up within the next few days. But here’s some little tidbits that I learned and observed at TCAF 2010.

I’ll probably be updated more and more as more memories come back to me, but the truth is I had such a great time at TCAF and I really hope everyone who participated will send Chris Butcher and the crew at the Beguiling a big thank you for putting on such a wonderful event.