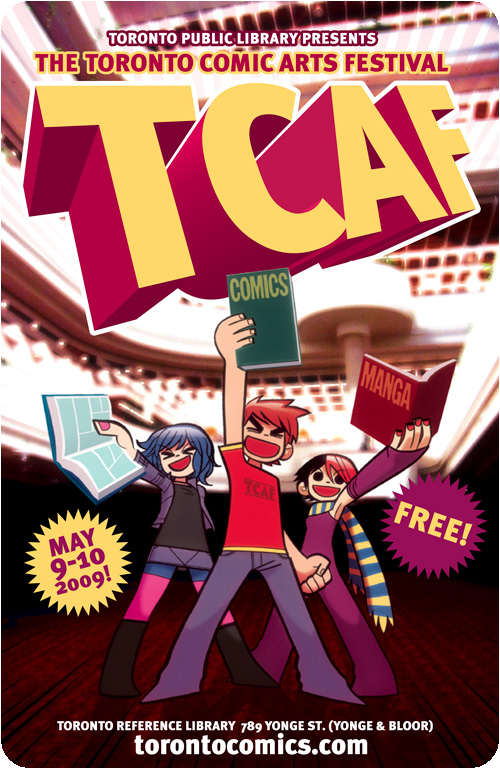 On Saturday afternoon, I sat in on a panel on censorship of manga. Generally speaking, I feel that censorship ultimately does more harm than good. I think that being told what is “safe” for me to read is incredibly paternalistic and patronizing and I know that a lot of “studies” that people cite in defence of censorship are often methodologically or logically flawed in some way. My opinion is that people should be able to decide for themselves what is and what not “appropriate” material is (or, in the case of kids, the job of the parents to be informed). I also find it incredibly hypocritical (not to mention reflective of some outdated puritanical morality) for sex and naughty language to be often censored in the States but that violence is okay.

Panel: Tentacles, Crosses, and Cigarettes: Manga Censorship in America (and Everywhere)
Where and When: The Pilot (2nd floor), 3pm-4pm
Featuring: Jason Thompson (Author of Manga: The Complete Guide, King of RPGs)

As manga has became more popular in the US, you start seeing more media coverage of the subject matter (often taken out of context). This shows the culture clash – what’s acceptable in Japan is considered unacceptable in the US. In Japan, you can show anything and everything in comics. In the US, not so much.

In the 1940s and early 1950s – during the heyday of Comics in the US – there was a moral panic about the dangers of comics to young people (salacious (i.e. sex and violence) content in horror and crime comics). No laws were passed but the resulting outcry resulted in the Comics’ Code (which toned down what you could show in comics in the US).

At the same time in Japan, manga as we know it was just basically children’s entertainment. But there was a similar outcry that comics caused juvenile delinquency (mostly from Japan’s PTA). But it never caught on like it did in the US. Despite the outcry, manga artists kept pushing the envelope. As the art form developed, adult comics became more acceptable and a number of adult genres grew.

In 1987, Viz Publishing started publishing Japanese manga in English. There was some censorship (Mai: The Psychic Girl). It remained in the small press scene but there still was some censorship. At this time, manga was published and released through the direct market (through Diamond and in the comic book stores).

Pokémon was one of the first manga to sell large number of copies in 1998-1999. This broke records and was distributed through non-comic book stores (Toys R Us, Wal-Mart, big box bookstores like Barnes & Noble and Borders). Drifting away from the direct market, these new distribution channels had more stringent regulations regarding what material was appropriate. Therefore, most of the censorship was economically motivated and usually determined by these channels. In other words, manga was censored to ensure that these new channels would still sell it.

Censorship is often subtle (i.e. removing references to “God”). A lot of the violence, however, isn’t censored. It’s interesting to note that all the English censorship/changes have to be approved by the creators of the original manga. In Japan, all manga is creator-owned but heavily editorially interfered with.

In terms of pornography, the majority of the censorship is mostly seen with Yaoi – boy-on-boy pornography. Typically, there are issues with the homosexual sex and the non-consensual sex acts, incest fantasies, May-December romances (in the English translations, everyone is 18+/adult). But it’s not just the mainstream stuff. Even the 18+/pornography (that’s shrink wrapped) has been censored. Why? To be able to sell through more mainstream channels.

The backlash against Loli-Con is not just a US phenomenon. Due to its consumption by a number of sexual predators (Tsutomu Miyazaki) had been known to consume this type of pornography. After his trial, there was a lot of censorship of manga within Japan. One of Japan’s most prominent manga artists, Mimei Sakamoto, was reported as saying:

This fetish you call moe is a pedophiliac fetish and is nothing more than perversion. It’s not really something you should be gushing over. In other countries, they’d call what you’re fantasizing over child pornography and you’d all be arrested. I’m ashamed that these otaku who are perpetual criminals have entered the mainstream and started an otaku boom. All the world is going around talking about maid cafes and stuff and making these so-called otaku look good. But people must realize that these guys are simply men incapable of recognizing reality and are incapable of being in a normal loving relationship. I can’t stop crying over the fact that these people have been labeled as otaku and that we are now going through an otaku boom.

In Japan, the Japanese PTA release a list of the most offensive/obscene manga. The list usually contains mostly shojô manga meant for teenage girls. (It’s not necessary filthy (i.e. the sexual explicitness is borderline)  but it’s for teenage girls and so is inappropriate). Other examples of Japanese censorship is found in narratives that detail the Japanese atrocities during World War II (such as the Nanking massacre), nudity, and homosexual sex.

Where is this all going? In Japan, more and more manga are being censored and the laws are being upheld. Continual push to tighten censorship laws (similar law to the US Protect Act, the law that Chris Handley was charged under). Critics state that this is just a reaction to negative Western media coverage.

Shelley Smarz is a life-long comic book fan and is nearing the end of her tenure as a professional student.