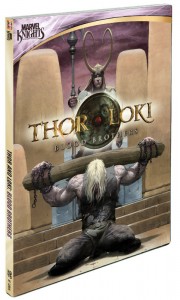 Marvel is releasing another motion comic animated feature September 13th, Thor & Loki: Blood Brothers.  It’s based on the Marvel mini series featuring artwork by Esad Ribic.  A motion comic takes the original art from the comic and adds animation: judge the quality for yourself in the clip below. This seems an odd choice to me for animation since Ribic’s style is very detailed and doesn’t lend itself to the process. It’s not too difficult to spot where the animators added their simplistic (in comparison to Ribic) renderings.