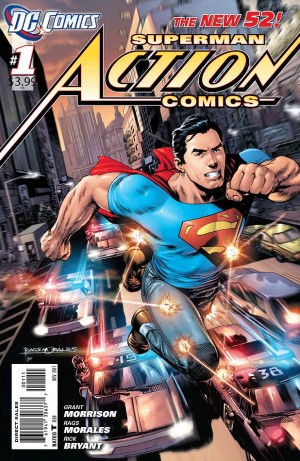 Action Comics #1 is part of the DC 52 relaunch, placing the “Man of Steel” in his early days as a superhero in Metropolis. Considered “Year Zer0” by DC co-publisher Dan Didio, Action Comics offers one of three takes on the Superman character, running alongside stories from different eras as told in Justice League and Superman.

High on a rooftop amid the towering Metropolis skyline, a crooked business man named Mr. Glenmorgan is paid a visit by the “Superman.” The Kryptonian hero takes him and holds him high above his head with one arm as the Metropolis police department makes their way to the rooftop to stop him, ordering Superman to put Glenmorgan down. In defiance he steps off the edge of the skyscraper and drops him, hurling down to the city streets far below in quick pursuit. Catching him before he hits the ground, Glenmorgan admits to his crimes once caught, scared witless as the police arrive on the streets and demand Superman desist. He again defies the authorities and speeds off, proclaiming “catch me if you can” as he speeds away. Deep in a hideaway, Lex Luthor and General Lane discuss the arrival of Superman, specifically how they can stop him. They continue to watch a live feed of a tenement building primed for demolition, one with families still residing inside. Thankfully close by, Superman interjects and prevents a wrecking ball from destroying the building, saving every citizen in the process. After telling them to leave quickly, Superman is confronted by a squad of street tanks which attempt to apprehend him. After a failed attempt, Superman grabs the same wrecking ball from the construction equipment and destroys one of the tanks. With the soldiers looking on from inside the other vehicle, the apartment dwellers gather around Superman to protect him, allowing him to get away easily. He arrives back to the rooftop of his apartment building and quickly changes into his “Clark Kent” clothes, running into his landlord as he makes his way down from the roof. He pays his rent, and continues into his room to call in a story to his editor. He instead calls his best friend Jimmy Olson, who’s with Lois Lane, and warns him not to board any trains as they’re wired not to stop. Lane, in search of her story, brushes off the advice and continues onto the train which begins to pick up speed without a hint of an imminent stop. Superman arrives and stops the train, which pins him up against a building much to the delight of Lex Luthor.

Upon discovering Action Comics was to function as “Year Zero” for Superman,  I wasn’t quite sure what to make of the distinction or what it could mean for the types of stories that could be told. With the possibility of it simply being another origin story, instead Morrison’s book places us six months after Superman’s arrival in Metropolis. Clearly on the wrong side of the law in the eyes of the authorities, Morrison’s story defines Clark Kent/Superman as someone who contrasts the corruption of modern society with his own ideals of right and wrong. I enjoyed Morrison’s ultra-vigilante take on the character, which spliced in very rudimentary but effective heroic elements that recall classic superhero tales of simple acts of crime fighting such as catching crooks and saving lives from certain danger. It’s a far cry from the epic-scope of modern superhero stories which typically pit the hero against a world threatening antagonist, and more attune to the Smallville television series . This issue was particularly well paced, noting its storytelling elements which allowed the plot to be told without feeling overwhelmed with the weight of the relaunch. Considering some of the other titles released thus far reek of editorial mandating, Morrison was able to tell a story which avoids that pitfall, helping making it a very successful first issue that enables its accessibility to new readers, while still succeeding as a retro-superhero tale for older readers.

I enjoyed much of Morales’ work in this issue. I feel like the first page of the book was a nice way to introduce the character visually, opting to use two identical panels in the beginning of the story, their dissimilarity being a streak of red across the left side of the second panel. In the proceeding panels on the page, Morales drew Superman crouching with only his cape visible, his back to Glenmorgan and his associate; quickly he stands up and turns towards them, his eyes burning red. The following pages were also nicely done, depicting the cops’ arrival to the rooftop where they find Superman holding Glenmorgan high above his head, pleading to the officers to save him. The artwork takes snapshots of the scene, displaying Glenmorgan screaming for his life, the cops pointing their guns at Superman, and then Supes smiling defiantly at them before taking a step backwards off the building’s ledge. The Glenmorgan portion of the story ends as the cops try to grasp at Superman’s cape, while Clark flies down to save Glenmorgan from death, catching him at the last moment and then landing on the ground. Morales did a great job of adding personality to the scenes, whether it’s adding shadows to the buildings as they hurtled towards the ground, the blurring of surroundings as they speed to their destination and finally once they hit the ground, the road below is destroyed under the impact of Superman’s strength. Morales’ work is impeccable throughout the issue, offering some high-grade work from beginning to end. The entire train sequence towards the end of the issue was nicely done, displaying Clark at the front of the train causing it to crumple. The pages then look at three different viewpoints of the events; from an office building as the train hurtles towards the building’s windows, from outside the train as it crashes through the window and disrupts their work day, and then inside the train as Jimmy and Lois hold on for dear life. Every page of the issue is well done and expertly coloured by Anderson. Some of Morales’ character faces are a little rough or strange, but it’s a small sticking point for artwork that is otherwise fantastic.

Although the relaunch offers plenty of opportunities for books to fall flat, Action Comics succeeds in providing a solid reading experience that is nicely complemented by outstanding artwork. Of the three books I’ve read from the relaunch, Action Comics is easily the best, which considering this is one of the flagship books, it’s surely a good sign that this book is off to a good start.