The news this week has all been about DC’s relaunch and books selling over 200,000 copies.  It all started with this announcement on the DC Comics Source blog:

[quote]Earlier today, Diamond Comic Distributors, the world’s largest distributor of comics, graphic novels, and pop culture merchandise, officially announced that JUSTICE LEAGUE issue 1, written by Geoff Johns and drawn by Jim Lee and Scott Williams, is the bestselling comic book for the month of August—and to date, all of 2011.[/quote]

It’s a nice headline but is a weak claim at best.  As with most things information was left out.  Diamond distributes to the U.S., Canada and the U.K., so Justice League was the best selling single issue North American comic of 2011.  Sales in the rest of the world of various comic material such as manga or bande dessinee, which traditionally far outsell anything in North America, are absent.  It’s still a great milestone and one worth celebrating.

Next up is a feature on Newsarama about the ten best-selling single-issue comics of the last decade.  Here’s their disclaimer:

[quote]Based on data appearing on The Comics Chronicles, here’s the list of, as of right now, the 10 best-selling comics of the past decade (all Marvel and DC releases, as it turns out). Keep in mind that these are only single issue comics — not counting collections or graphic novels — and the numbers are based on domestic direct market (comic book store) Diamond sales. And as The Comics Chronicles points out, only initial preorders are considered before February 2003 — which affects the standing of titles like the original Ultimate Spider-Man #1. [/quote] 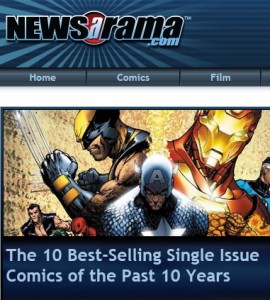 Sounds good, right?  It’s currently their lead article.  I followed that link to The Comics Chronicles and their top ten list is a whole lot different than the one published by Newsarama.  I actually can’t imagine how they could look at the list and get is so wrong since the article they took the information from is so clear.  Then I found it: on item 2 “Civil War” they had this note.

So it’s not a list of the “The 10 Best-Selling Single Issue Comics of the Past 10 Years”, it’s some other kind of list.

Here’s the original list; I’m including the top twenty.