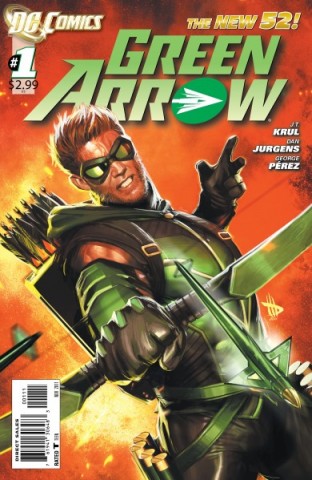 This week we’re also taking a look at another of the new DC 52 number ones, this time the Emerald Archer himself, Green Arrow. Coming off a tumultuous year in the life of Oliver Queen, the series has been rebooted, taking Queen back to a location he’s not been in some time. Intrigued? Then read forth.

Oliver Queen is cast in the familiar role of billionaire by day, vigilante by night. With his endless cache of trick arrows, martial arts blended with street fighting skills and a flare for heroics, he protects the streets of Seattle as Green Arrow.

In midst of a board meeting at Queen Industries’ headquarters in Seattle, Oliver Queen is nowhere to be seen. Unbeknown to the board, Queen is half a world away leaping from one Paris rooftop to the next as Green Arrow. From high atop a building directly across from a cruise ship that will operating as a dance club, he spots some local criminals and decides to engage. He briefly checks in with his information and intelligence brokers, Naomi and Jax, before leaping from building to building until he dives through a skylight and onto the ship’s dance-floor. Green Arrow quickly takes on and temporarily subdues each of the three criminals, later firing a special arrow into the ship’s controls which allows Naomi to take control of the ship. Arrow continues to assail the criminals, taking each of them down with ease using his various gadgets and trick arrows ranging from freeze to electric, up to and including old-fashioned, straight forward arrows. In the aftermath, Queen travels home and talks to Jax about why he needs him, but more importantly what motivates him to fight crime as a vigilante. Meanwhile at a prison in France, the criminals Green Arrow had rounded up on the cruise ship are paid a visit by a group of super-powered villains.

This story is a complete departure from Krul’s work on the previous Green Arrow volume, and I can’t say it’s for the better. Foremost it seems the location of the story has been shifted from Star City to Seattle, which I believe is the first time since Grell’s Longbow Hunters story this has been the case. That’s a very small element however of what’s displeasing with this first issue. The Brightest Day Green Arrow story had the potential to function in the image of classic Robin Hood styled Green Arrow stories, plot elements which included helping disadvantaged families or children throughout the story, while fighting against “corporate America.” It had an air of edge to it in the wake of the Cry for Justice story and its fallout, but the book was quite good. This version taking place in the new DCU is a very formulaic piece that removes those elements of social justice and simplifies the character’s personality, stripping the Green Arrow character of what makes him who he is. The story itself takes him away from his hometown and has him fighting criminals in Paris for no discernible reason, while the story, although well thought out and paced, is quite bland and boring. Knowing that Krul is capable of more, the writing itself was less than what I expected and had too many forced, cheese-ball references to the criminals being “losers” or “badasses.” The writing felt very watered down, almost as though the target is to appeal to younger readers, while once again making Oliver Queen a carbon copy of Batman, complete with his own Oracle type character.

For the most part I enjoyed Jurgens’ work in the issue. Although I’m not a fan of the costume redesign coinciding with the relaunch, Jurgens made it look somewhat okay, with its arm and shin guards, combined with what I presume is lightweight body armour complementing Queen’s classic Green Arrow garb. His work is still very solid throughout. I really liked the panel where Arrow crashed through the ship’s skylight, landing on his feet mid-stride seemingly with little shards of glass crashing to the floor below. It was a very nice piece of artwork altogether. I also enjoyed the elements of the arrows, which Baron brought to light using elements of ice and electricity to apprehend the thugs as equally well as he did in creating the effects of their own superpowers. Jurgens did some fairly cool panel work too in mimicking Queen’s firing of his arrows. This was accomplished by constructing very thin vertical panels, leading directly into the arrow making contact with the ship’s control panel in two subsequent squared sequences. I enjoyed the fight scenes between Green Arrow and the thugs, as it seems Jurgens’ knack for creating solid action has appeared once again. My sole complaint is with the costume which reminds me of a streamlined version of the Green Arrow costume from Smallville, while I can’t say I enjoy the youthful Oliver Queen as a whole.

This was a very disappointing issue. After what I viewed as the elements of a successful Green Arrow book coming out Cry for Justice, this iteration of Oliver Queen falls completely flat. It’s a boring rendition of a traditionally edgier, outspoken character which has been relegated to fundamental crime fighting as opposed to sticking to the classic Green Arrow credo. The dialogue is additionally tedious during his fight with the crooks, calling them “losers” and mocking their belief in their “badass-hood.” It’s forced and not very smooth conversationally during these bits. The story premise as a whole feels ripped off from a Batman Inc. comic, or perhaps borrows elements of the “Watchtower,” information broker dynamic from Smallville with the addition of Jax and Naomi to the mix in place of Black Canary, Speedy or Connor. Unlike the previous first issue of Green Arrow, this one leaves me wanting. Hopefully several plot elements are divulged in the near future and his origin story is fleshed out such that some interest can be found here, because as of this point, Green Arrow is not worth reading.