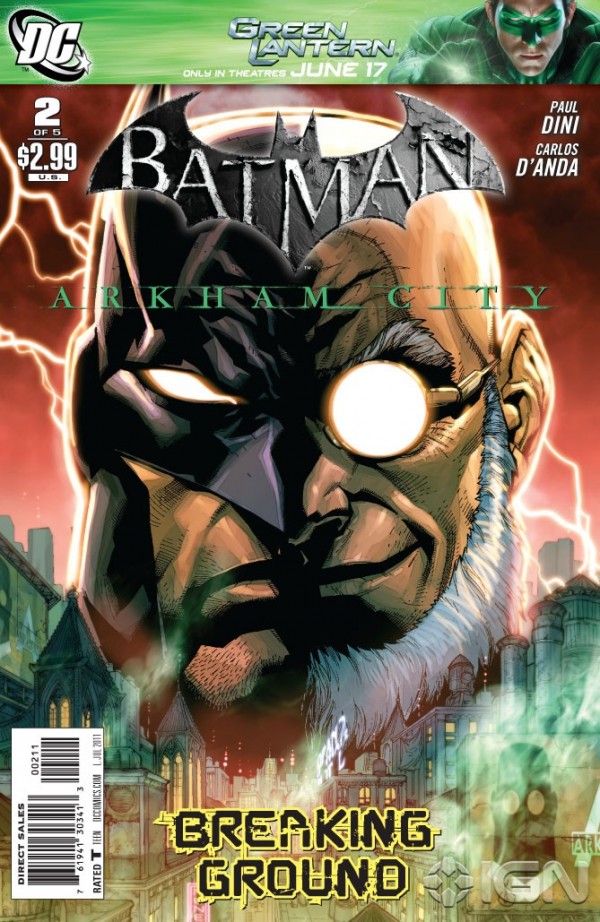 Last week issue two of the Arkham City mini-series was released. The mini-series, serving as the bridge between the highly successful video game, Batman: Arkham Asylum and its sequel Arkham City, is five issues long and looks to elaborate on the story after the first game while setting up the conditions for the follow-up. Does the book measure up to the game, or is it just another video game-comic book tie in? Onward!

While trying to track down Two-Face, Batman runs into two thugs hopped up on Titan serum. The thugs cause an explosion and 300 people are killed. In response, Gotham’s mayor enacts martial law and opts to create Arkham City to house the city’s asylum dwellers and criminals.

Amid skeptical reporters, Bruce Wayne joins a gathering crowd around the soon to be opened Arkham City. Mayor Sharp tells them it’s not a time for skeptics, proclaiming the new city as Gotham’s last, best hope. Later that night, Batman is en route to Mayor Sharp’s mansion to find clues about the city’s construction and why Sharp is so keen on it. When he arrives, Batman discovers nothing of note except stacks of photographs of himself and all of his gadgets. Realizing it’s a trap all too late, Hugo Strange appears on a computer monitor and tells him as much. Traps reveal themselves and Batman is attacked from all angles. The Mayor’s guards arrive a second too late to apprehend the caped crusader though, who quickly escapes out of a bedroom window.

In the asylum, the guards gradually make their way through a list of inmates to be transferred to Arkham City, although one of them resists and tries to diplomatically argue his way out of going. The man is sedated and carted off. Meanwhile in the depths of the asylum, a guard rolls a captured Joker to another location of the building. Once they arrive, a larger group of guards indicate they intend to kill Joker in order to prevent him from ever hurting anyone like he hurt their friends during his recent takeover of the asylum (see Batman: Arkham Asylum). As they begin, an old friend intervenes, stops them, and helps Joker escape to a boating dock where they leave the asylum and eventually arrive at the new city. Batman arrives there in time to stop his nemesis only to be derailed by an RPG launcher; sinking into the bay as Joker and his friend stroll into the city.

I quite enjoyed the art in this issue. D’Anda effortlessly transitions from penciling bright sunny days remarkably well to darker toned panels characterizing the Gotham night-time sky. His best work however is saved for the scenes where Batman breaks into the mayor’s mansion where the locale functions as a fitting backdrop for the array of traps awaiting the Dark Knight, and also affording D’Anda the opportunity to play with Batman’s gadgets a little bit when using the night vision lenses in his cowl. Although D’Anda’s pencils were superb, Eltaeb’s colouring easily out-shined the already tremendous art produced for this issue. From his colourful introductory pages showing the early morning daylight, to the darkened, almost blurry nighttime landscape as Batman jets along the Gotham streets at top speed, he covers  a considerable range within his work whether completing the aforementioned tasks, colouring the dank recesses of Arkham Asylum, or adding fine touches as seen in the Mayor’s mansion. I thought the colouring of Batman’s eyes as the character uses his night vision was different, combined with the panels where we’re able to view the room from Batman’s perspective. D’Anada and Eltaeb work well together in this issue, creating some great visuals to go along with the story.

Although a fan of the Arkham Asylum game and reasonably anticipating the release of the sequel, I’m a little hesitant about comic book tie-ins to video games. This is the first time I can recall where a major comic book character has received the treatment, noting recent video game tie-in books such as inFamous, Assassin’s Creed, and God of War. The book’s writing is solid, helmed by Batman mastermind Paul Dini who has a lengthy list of Batman credits to his name. Regardless, this is a prequel series designed to bring fans of the video games back into the store, while concurrently catching the eye of the casual Batman fan to arouse their interest in the game. To this point the story feels quickly paced as it marches along from issue to issue, seamlessly moving from one plot point to the next. Yet, I can’t bring myself to be interested in the book. It’s smart marketing to capitalize on the fanfare attached to the Batman property, but that doesn’t necessarily mean it’s a recipe for a good title. I can’t consider this mini-series to be particularly essential unless you’re a die-hard Batman fan or completest who has to have the complete story and know every detail leading into the game. I feel like altogether this book is going to appeal to fans, but ultimately is unnecessary and can be passed on without missing a dire plot point. While Dini is a very competent writer and has penned some great Batman stories, this felt lackluster as a story, serving more as a marketing tool for the game rather than a piece of work unto itself.