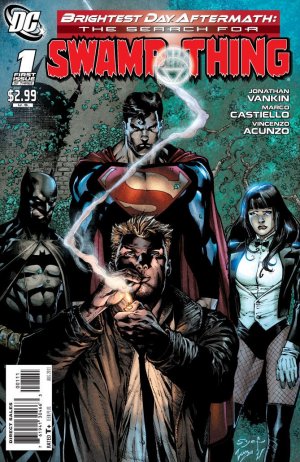 For a year I followed the Brightest Day series through its ups and many downs, so you may be asking why I would revisit the series. Well, to answer your question, John Constantine. That dynamic alone warrants a return. Naturally. Forward march!

In the wake of Brightest Day, Swamp Thing rose as earth’s protector and guardian of the white lantern. No sooner does the elemental return do the board of governors of a corporation wind up deceased. With Swamp Thing responsible, an old acquaintance of the creature formerly known as Alec Holland arrives to investigate, blazing a trail of hell  in the process. The search for Swamp Thing has begun and John Constantine is on his trail.

Sitting in a pub in south London, John Constantine unfolds a newspaper while sitting alongside his mate, Chas. Convinced Swamp Thing’s return is bad news, Constantine travels to the Botanical Gardens where he’s attacked by the vegetation at the garden. John is saved by Chas is nick of time, but decides he’s going to need help if he’s going to find Swamp Thing. Constantine travels to Gotham in search of Batman, eventually finding his way into the passenger side of the Batmobile. Batman quickly removes him from his car, but entertains the quick-witted Brit a while longer before being taken into “The Green” by Constantine. While there they briefly encounter Swamp Thing before Constantine presumably blacks out; later he regains consciousness with the help of Zatanna. Still unsure of his intentions, Constantine tries to fill in the blanks for Batman where Swamp Thing is concerned. He explains the history of Alec Holland, concluding that if he’s right, the world’s in quite a mess.

The plot steadily moved along in the issue. Very little actually happens though, as the series appears to be primed for a slow-build towards whatever its conclusion may ultimately be. There are definitely elements of mystery within the plot as it relates to Swamp Thing’s purpose and how Constantine factors into it, as there appears to have been a souring within their acquaintanceship. I enjoyed how the issue differentiated Constantine’s perceptions of London and Gotham, showing how he failed to immediately acclimate to his surroundings. I felt the book moved along well, introduced the supporting characters naturally and organically, and did so without bombarding the reader with information or cumbersome plot details.

I’m a little unsure of the artwork in this issue. Immediately there was nothing within the book that grabbed my attention. However, the early pages do their best to characterize Constantine in comparison to the modern DCU in having him sit in a London pub with Chas, his best mate. The early pages are a little underwhelming altogether, although I thought the one page where John is being attacked by the foliage was well drawn.

The best pages in the book are those of the Gotham City streets. With the rain pouring down upon the varying surfaces, I like how Gotham’s night-time landscape was contrasted against it and the headlights from vehicles on the street. The most notable and enjoyable work though was the exchange between Constantine and Batman inside the Batmobile, leading to John’s forced removal from the car due to his habit of smoking. The subsequent pages are also a treat. Once John recovers consciousness towards the end of the book, Castiello and his team create a succession of panels which slowly come into focus, intending to represent Constantine’s eyesight coming back into focus. Cairdo should be commended for her colouring work on this page.

I feel like the mystery relating to Swamp Thing after a single issue was more intriguing than the entire Brightest Day series preceding it. Now that Swamp Thing is back in the DCU fold, now what?

This series aims to answer the question of what his return means, and although we’ve not a clue as to why, this issue drops subtle hints as to what Swamp Thing’s motivations may be and who he’s targeting. With Constantine being newly introduced into the mainstream DCU beyond the Hellblazer series, I feel like this book works to integrate both characters, with Constantine being a natural addition to the story given the history between them from Alan Moore’s Swamp Thing series. I’m interested to see where this story goes, which considering the series  preceding it, is a feat unto itself. Brightest Day Aftermath is not an overbearing book, but rather seems primed to slowly boil itself towards a rewarding conclusion