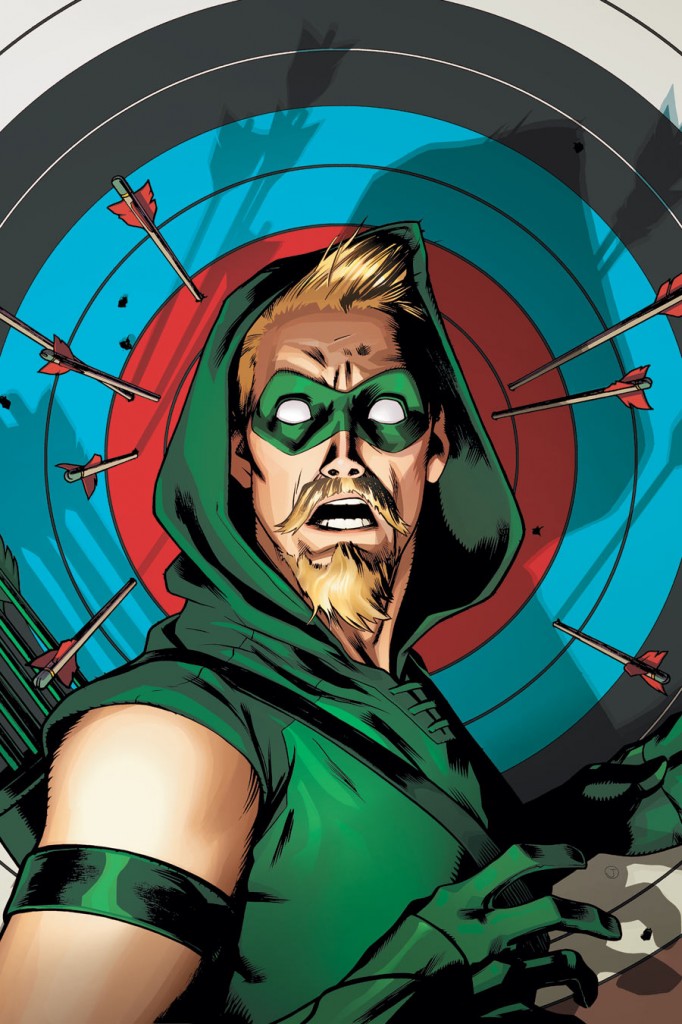 As Brightest Day concluded, so did J.T. Krul’s run on the title as of issue 12. Writer James Patrick joins Agustin Padilla as the new creative team behind Green Arrow, so let’s see how this new team stacks up to the past year of Green Arrow stories.

Without hesitation Oliver Queen killed Prometheus – the villain responsible for the death of Lian Harper, Queen’s granddaughter – in cold blood. The act led to his arrest, put him at odds with his friends and ultimately drove him from Star City towards an immaculate forest in the heart of the city. For a year Green Arrow protected the forest while helping the helpless while finding a new antagonist in the Queen. With the arrival of earth’s protector, Oliver Queen is left to find a new reason to live as he struggles to find the brightest days his quest for redemption will bring.

Projectiles begins with Green Arrow recounting his initial training with an arrow before deciding to use them as weapons against people. Believing it only right that he understand the damage an arrow can inflict to a person as it travels through their bodies – severing limbs, arteries and breaking bones if not causing death altogether – Oliver practices on cadavers at a medical school. Yet, in light of Prometheus’ death, he begins to realize he had forgotten he ever conducted the experiments. Sitting in the Star City forest alone, Ollie’s train of thought is interrupted by a U.S. federal marshal named Hailey Donovan who asks him to help transport a dangerous terrorist to a maximum security prison. She asks him because she knows if need be he’s capable of making a fatal-shot to end any threat. Arrow agrees and before long finds himself in the back of a transport  truck with a terrorist-reverend named Billy Muggs. The good reverend speaks his gospel to Donovan and Queen, with his predictions coming true as his followers rescue him from federal custody. His angels aid his ascension into the sky as Arrow can only watch, refusing to make a fatal shot after failing to once already. Arrow resolves to hunt Muggs, while Donovan laments about her poor decision.

Immediately I noticed the story departs from much of the established story set by Krul’s run relating to the Queen assuming control of Green Arrow’s former business. This is good or bad depending on whether you were a fan of Krul’s work, and even then I suspect we haven’t seen the last of the lady with an axe to grind. Patrick’s first issue follows the core of the Krul run quite steadily, continuing the tone of Queen’s regret and remorse over his actions against Prometheus as we find him rediscovering his early training and thought processes towards using a bow and arrows to fight crime. I felt this was a nice story device which forces Queen and readers to rediscover the core of the character which Krul touched on in the early issues of his run. In refusing twice to make a fatal shot, we find the character well on his road to redemption, rediscovering the conscience that makes Green Arrow a hero.

I loved Neves’ artwork throughout his work on Krul’s Green Arrow. It was compelling, intricate and dynamic. Although difficult to really mimic that style, I felt Padilla was able to put his own stamp on the book’s visuals to create an identity of its own apart from the previous 12 issues. Apart from the opening page, we immediately see his talents at work as an arrow volleys through the air, puncturing right through a cadaver’s torso, slicing through tendons and muscle until it finally connects with its spinal column; little chips of bone flying off the spine as the arrow digs in. Another example is offered later as Ollie contemplates taking a shot at one of Muggs’ henchmen, remembering the sounds and images of an arrow piercing another’s heart. Much of the rest of the artwork is not as photo realistic as the previous run, differed slightly by the purplish hue on the character’s faces or duller colouring tones on the pages, such as the page where Donovan, Queen and Muggs sit together in the interrogation room. What I really enjoyed with the work was how Padilla created the illusion of quickly moving objects, be it arrows, speeding cars, or the blurring of objects as the former and latter speed by them. One such scene finds Queen standing atop the transport van with air whizzing by, evident on the face of the van’s roof. No two artists are alike, but the quality of work between Padilla and Neves is very close, with the only differences being the colourists that bring and have brought both artists’ tremendous pencil work to life in the last year.

I felt like this issue was a good start to Patrick’s run on Green Arrow, however long it will last leading towards the end of Flashpoint and the company-wide renumbering taking place in September. With that in mind, his run seamlessly continues the story established by Robinson and Krul, moving Queen forward towards some measure of spiritual redemption. Yet, because the run continues the core of Krul’s story, if it turned you away there’s nothing new here to delve into unless you’re curious about the new team or where the book may go heading forward. I’m not sure how Krul’s story will be reconciled with Patrick’s concerning the varying antagonists and supporting characters established in Krul’s work. Although difficult to project where the book’s destiny lays considering I’m not familiar with Patrick, the run is off to a good start. There’s something compelling about a character who’s sunk as low as Queen has, and then yearn for redemption. If done well, Patrick may execute one of the better Green Arrow stories in some time.