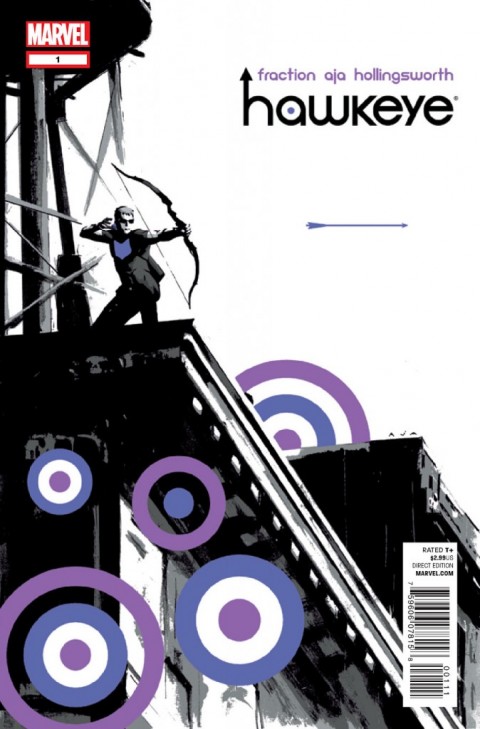 The first issue of Matt Fraction’s Hawkeye series is one of a number of titles debuting prior to the “Marvel Now!” initiative. The series finds Fraction and David Aja, the team behind The Immortal Iron Fist, reuniting to bring readers deeper into a more personalized view of Marvel’s alpha-archer, Clint Barton.

For the uninitiated to Hawkeye’s world and long-time fans alike, Fraction’s title begins with a thrill as Hawkeye leaps out of an apartment building window from several stories up. It isn’t just the simple daredevil act that defines the early tone of Hawkeye, rather it’s Fraction’s crystallization of a very simple reality; as Barton plummets several stories before landing on the hood of a car, Fraction reminds readers that Barton doesn’t wear armour, nor  does he have super strength or magical powers. He’s just a man with a “stick and string from the paleolithic era.” Hawkeye instantly finds itself grounded in a very human setting reminiscent of Bendis’ Daredevil run.

After several months of convalescence in a hospital bed, Barton leaves the hospital’s care and returns home to find his co-tenants have had their rent raised by their Russian landlords. It’s here we see a glimmer of his true nature under the Avengers facade. The heart of the character becomes defined throughout the issue through similar pages, bringing readers further and further into the world of this hard-knocked Avenger. We find him to be emotional and strong, we find him to be intensely loyal and with heart; the core of this book could very easily be defined by these basic principles much in the same way Bendis defined the scaled-back, down-to-earth realism in both his Daredevil and Moon Knight runs. While the issue is not without its fair share of action — Barton does after all confront a Russian thug and his crew — but it ends on a warmer note which brings our understanding of Barton as an individual full circle from the beginning of the issue.

Aja offers a range of techniques and page arrangements with his artwork, all well executed and fitting to Fraction’s script. We find Barton in a variety of locales from inside the hospital room, outside in a New York City summer’s day, and out at night in a sketchy neighbourhood. Aja’s pencils and inks shift to fit the conditions required to fulfill the script’s needs, creating an organic, flexible environment for Barton to exist within. Additionally of note, Aja does not hold to standard panel arrangement; one page features a small get-together on the roof of Barton’s apartment complex with 12 panels composed mostly of small snapshots of the people in attendance. The height of Aja’s contributions to this book occur towards the end of the issue as Hawkeye crashes an illegal gambling operation and proceeds to thrash the thugs, while additionally displaying shades of Bullseye in using an “Ace of Spades” to injure one thug’s throat. While the scene is similar in tone to the first page where Barton proclaims, “okay, this looks bad,” as he falls, the issue ends on a tender note as he adopts a dog injured during the skirmish, patting it on the head while promising the Vet, and readers, that he’ll come up with a better name than “Arrow.”

The issue was a nice surprise. Despite expecting great things from Fraction and Aja considering their previous work on The Immortal Iron Fist, the duo exceeded those expectations. It’s difficult to make readers necessarily care for a character that has for the most part consistently been a supporting character, yet they have put together a great first issue which aims to follow Barton’s adventures “when he’s not being an Avenger.” It paints him as an interesting figure more similar to his past antagonistic ways, highlighting despite his reformation, that the core attitude remains and that although he’s very much a “good guy,” he maintains that hard edge and willingness to do what’s necessary to protect those closest to him. That’s an interesting element to inject, humanizing the character and making him, and the book, a very good, accessible read that has a lot of potential.