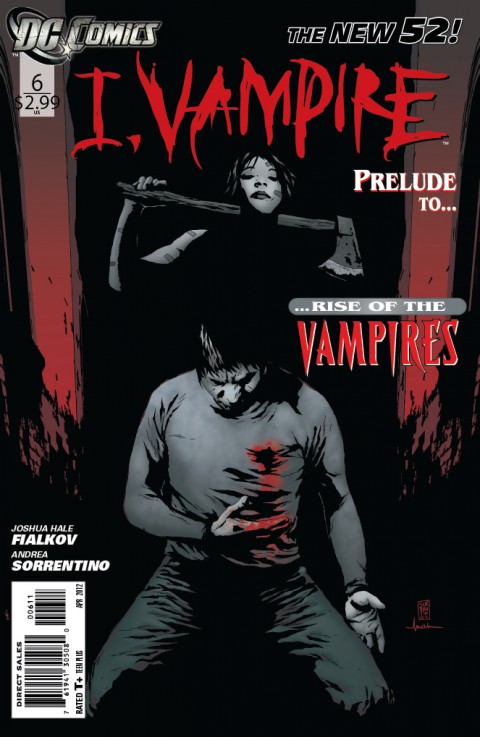 As one of the newer series to come out of the DC relaunch, I, Vampire has delivered a vampiric dose of horror into the DCU over its first five issues. With a crossover with Peter Milligan’s Justice League Dark looming, issue six of this series was released alongside the latter title last week to help kick-off one of DC’s first crossover stories within its new status quo. The question left to answer though is how well this book, and its first story arc for that matter, were able to stand on their own.

In 1591, shortly after becoming a vampire himself, Andrew Bennett turned his love, Mary Seward into one of the undead. Corrupted by her newly found dark powers, Mary christened herself, “Mary, Queen of Blood,” and led a legion of vampires called “The Blood Red Moon.” The cult was determined to take over the world, while Bennett struggled to undo his mistake and take down Mary and her followers. Now a new threat rises as Bennett’s war against Mary continues, with the likes of Batman and Constantine enlisted in his fight to prevent a vampiric armageddon 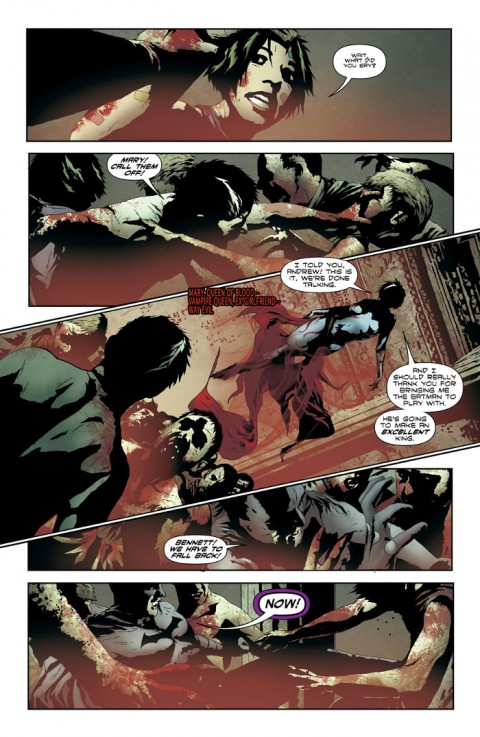 Outside a Gotham courthouse, Andrew Bennett, a 600-year-old elder vampire, fights alongside his allies against an onslaught of vampire foes led by Mary, Queen of Blood. With their numbers testing the limits of even Batman, Andrew spies a young boy he believes to have sired the entire army. Much to the dismay of Batman, Bennett declares they must kill him in order to set the army free, a point which Batman quickly disagrees on. As he swoops in, Batman hurls  batarangs at him which force him to land roughly on the ground. With his target still in his sights, he lunges at the boy, having shifted to wolf-form, and picks him up high above Mary’s minions as he reverts to human-bat form. Lopping off its head, some of Mary’s army regain their human qualities. With the full-blooded vampires remaining, Batman orders that they ensure the humans are evacuated safely. During their exit, the professor informs Tig Rafelson, a vampire hunter, about the sire-vampire connection, telling her if a sire is killed, their “children” are saved. Concurrently Batman and Mary succinctly discuss the matter of their oppression, before attacking her vainly and subsequently being physically manhandled by the vampire queen. Andrew joins his side, but while Batman pleads with him to find another to save the army, he is run through with a blade and beheaded by Tig, believing his death will be the salvation of the lost souls. Yet, his death brings something else entirely in the rising of Cain; the father of all vampires has risen. 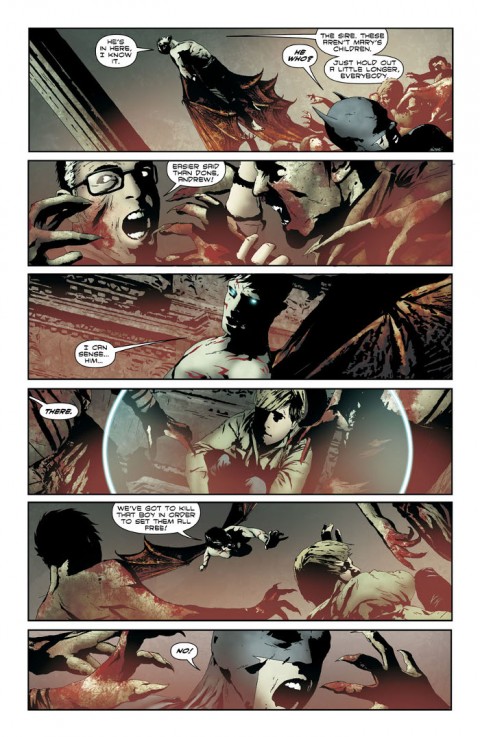 Upon hearing good things about the title and the story Fialkov has written, with the Justice League Dark crossover looming this felt like a natural issue to jump onto to get the lay of the land concerning the title’s plot. Although I had to read up on the original House of Mystery stories to understand the premise of the comic, I found the sixth issue to be easy to follow as Andrew Bennett and his companions tore through Mary’s vampire army. It was a very easy read, but importantly a strong, very enjoyable read ripe with poetic turns resulting in unforeseeable, albeit completely expected twists with the benefit of hindsight. What’s very attention grabbing with Fialkov’s writing is how Andrew Bennett’s narrative is written; the benefit of 600 years of worldly experience springs from the pages as he coldly decides a young sire must die to the chagrin of Batman, who he previously comments on as his having the benefit of a clear ethic of right and wrong, black and white. The ending was fitting and seems to place the remaining principal characters in a precarious position leading into the next arc. With Constantine returning to the title with his “friends” in tow, I’m interested in how the remaining characters will interact with the mystic Justice Leaguers and how they will tackle the resurrection of Cain. 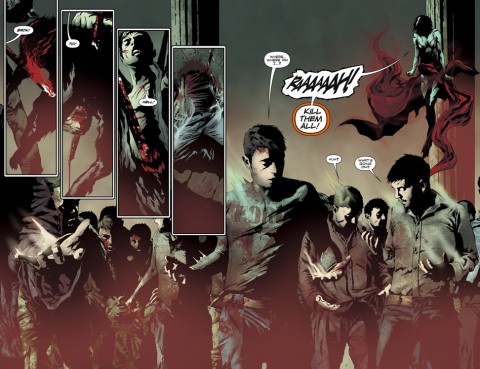 I’ve not been exposed to much of Sorrentino’s art, but from what this issue contained it is horrificly delightful. The artwork feels gritty and well suited to the horror-based landscape, complementing it well while presenting some rather gruesomely violent panels. Joining Sorrentino’s efforts was colourist Marcelo Maiolo, who livened the undead by smearing blood across their mouths and fangs, or by defining the violently graphic splashes and spurts of blood as characters are dismembered one at a time. One thing Sorrentino does well in the issue is drawing metamorphoses of the characters as they shapeshift from human form to animal form, creating a sequential depiction of the change all in one panel. This technique is used numerous times in the issue and is executed well at every turn. Yet what I found disagreeable with the art was the consistently used horizontal arrangement of panels throughout most of the issue, giving way on a couple of occasions where Sorrentino changes up the layout of the page into vertical panels. Her best work though comes at the end of the issue when Andrew Bennett is impaled and killed by Tig. On this page a two-page spread is devised displaying Andrew and Tig in the background, while the majority of the page is doused in a reddish tone to emphasize the violence of the act. Several panels decorate the outskirts of the page with the reactions of the characters in the immediate vicinity, but the nicest inclusion on the page were the panels which were drawn around Tig’s face and the blade used to impale Andrew. Here the reddish tone is taken away to accentuate the important pieces of action and add emphasis to their weight by only showing the full colour artwork within the borders. This was easily the best page in the book, and I hope to see more of it in future issues.

I, Vampire was a nice change from some of the other new DC titles. It has a freshness about it that gels well with the editorial desire to emphasize part of the mystic or horror-based elements left unexplored in recent years with DC’s line of comics. Titles such as this and Justice League Dark are strong additions to the DC library, while this issue specifically set the stage for a very interesting crossover between the vampires and DC’s most powerful mystics. This was a fun, action packed read complemented by great artwork which fit Fialkov’s story perfectly. This book is a fresh injection of horror into the DCU and helps keep things a little darker in tone for readers who like a little extra weight added to their comics. I’m looking forward to reading more, as well as the JLD crossover starting in March. Now is a great time to jump into the series, as it feels like it’s hitting its stride and place among the New 52.