My favourite Spider-Man artist, out of all the artists that have ever been, is John Romita Sr., so it goes without saying that I was very excited when IDW announced this Artist’s Edition. Artist’s Editions, for those who need to know, are full-sized reproductions of complete issues using the artists’ original pages. Published by IDW, they allow a unique look at the art as it would have originally been before the colouring process, but after it had been inked. This allows fans to get as close as they ever could to owning the original art, all nicely packaged in a slick, hardcover book.

Lots of people will go on and on about Steve Ditko and how he is THE Spidey artist. I would never knock the guy’s work, after all he did help create Spider-Man and many of his most famous villains, but it was John Romita Sr. who developed the iconic look that has stuck indelibly in peoples’ minds. When one thinks of Spider-Man, the picture is that of a John Romita rendition. And for as much as that is true for Spider-Man himself, it is doubly  the case when looking at his supporting cast. Harry Osborn, Gwen Stacy, Mary-Jane, Aunt May, and more all become much more fleshed out, much more real under Romita’s pencil.

It is interesting to the see the creative process on the pages. Some leftover blue pencil marks show where Romita was laying out the panels and setting up the scene. I assume that artists would get even more enjoyment out of this than I do, for when you pick up a pencil yourself you gain a greater level of understanding of the craft. 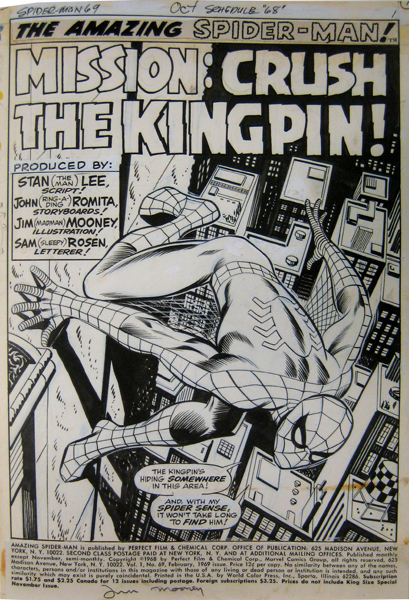 This edition has issues 67 to 69, 71, 75, and 84 which include a great Mysterio story (and one of my favourite covers with issue 67, as well as story lines that see Spider-Man attend a campus protest and fight Quicksilver. The final issues are some excellent early Kingpin tales that highlight Romita’s contribution to creating such as key Marvel villain. Ideally would someone want other issues? Maybe, but that isn’t the point of Artist’s Editions, you get whatever you get, copied from collectors that have the complete issue in original artwork.

The only complaint that I have is that the large format means that it can’t really fit on my shelf. One of the best features of the work is that it retains its original size, and yet it is this giant size which makes the book too unwieldy for my shelf. I am complaining needlessly. This Artist’s Edition is a must have for any Spider-Man fan and while pricey at $150 you will get your enjoyment out of the book. I have no regret about dropping the cash and will enjoy this for years to come.