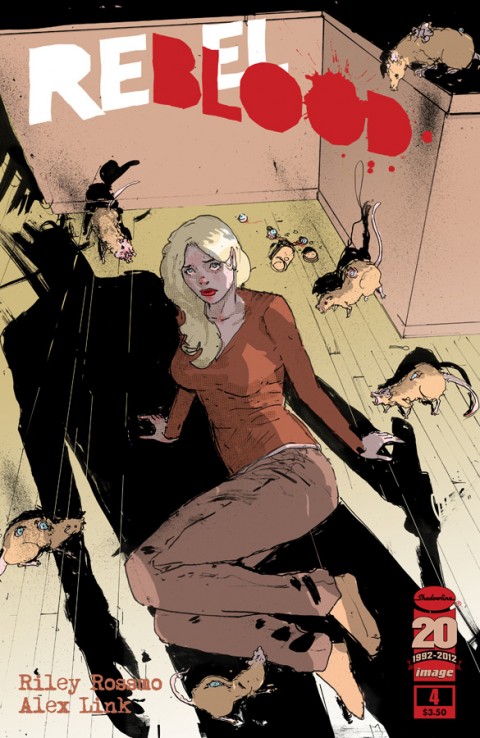 Rebel Blood is one of many zombie-based books available for the consumption of horror fans, and considering that, we must ask what differentiates them from each other. Which are good, which are less so; in the end, which are worth our money and which are not? Given the arc of Link and Rossmo’s story and its ultimate conclusion, it’s very clear Rebel Blood in any incarnation is worth every cent of its price tag.

Where the first issue establishes Chuck Neville as the defacto protagonist of the story, subsequent issues continue his trek across the forest in search of answers, stumbling upon his former mates and locals after having been subjected to the zombie virus raging throughout the forest’s landscape, infecting animal and human alike. In desperate search of his wife and children, Chuck kills every individual in his path until he eventually arrives at his fated destination.

Issue four begins with Chuck’s arrival at the home he shares with his wife, shotgun and hatchet in hand as he exits his pick-up truck. Walking into the house, his wife, unharmed to this point, exits the bedroom and greets her estranged husband in the kitchen. She strangely quizzes Chuck, naively from his perspective, on why he holds his two weapons as he quickly glances around the kitchen table area to notice two empty plates and half-consumed glasses of wine. Hearing a noise coming from the bedroom, he turns to find a large zombified man storming in his direction beyond the bed room door’s threshold. Quickly turning to blast him with his shotgun, the aftermath finds his wife consoling the fatally wounded corpse before she transforms into one of the undead herself. Chuck reactively beats his seemingly undead wife with the butt of his gun, taking a moment to rest after he acts before hearing someone call him from the outside. He runs out to find his two children under distress and in the “care” of two men, killing one before the other takes his daughter away. Moving with his son back inside, the story unfolds unexpectedly as his wife, not nearly so dead as first thought, kills Chuck while the horde outside the cabin stand revealed prior to the denouement.

Without discussing the ultimate revelation, the story Link and Rossmo have crafted is an amazing, albeit intensely horrific tale that is executed in such a way that it stands above the cut-and-dry zombie horror comics currently available. Employing the storytelling equivalent of a sleight of hand, the duo pulls the rug out from underneath readers expecting a straight forward zombie romp and delves into the analysis of its characters. Rebel Blood is very psychological and cerebral in how its plot unfolds, and although violence is very much an inherent and necessary part of the comic, the climax of the series is hardly what could have been expected despite allusions to the contrary throughout the first issue. Where zombie comics much like Walking Dead hone very much in on the standard survival horror nature of its foundation, Rebel Blood manages to be entirely unpredictable and is rewarding as a completed story.

Rossmo’s artwork is horrific in every positive sense. His undead creatures are grotesquely disfigured and are reminiscent of the worst things humankind can conjure within its thoughts. The monstrosity of these characters define the narrative of this ultimate tale of humankind’s struggle against itself, a view skewed by the lens of subjective reality. Rossmo’s work navigates beyond the simple horrors of the story and employs a measure of elegance as the characters systematically break-down, evident in panels such as Chuck’s spying of the dinner plates in a separate panel as he says, “totally blind to what’s happening around you,” or a shadowy transition from the normal complexion of Chuck’s wife to that of her more monstrous self when she seems to become angrier. The grand revelation in the final pages capped off the mystery behind the events of the comic, crystallizing the monstrous realities of his and Link’s script.

Where many comics seem to fall short of functioning outside the borders of predictability, Rebel Blood as a complete mini-series was a resounding success. As a zombie comic it infused a measure of horror into every facet of its storytelling devices from the script itself through to the pencilling and ink work. The atmosphere portrayed throughout is one ripe with violence inherent to the genre, which despite its face-value promotion is much more than something so simplistic. Rebel Blood is a horror comic in every sense, a very good one at that.