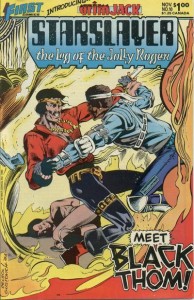 I’ve been going through a basement full of comics starting my long preparation for a couple of big comic conventions I’m setting up at late in the summer. I was rifling through a box and found some Starslayers, I stopped at the nice copy of issue #10. “Hey! I remember this book!” was what I said. I used to read Grimjack in the 1980s. I was a Conan fan and for some reason took to the uncompromising violence the book portrayed. This was a cool book!

I often bring the Overstreet Price Guide with me when I’m rummaging through the basement that way I can look up values on stuff I think may be worth money but am not sure. My spider sense often tingles when I find something that might have value. It was tingling and so I looked Starslayer #10 up and to my chagrin it was listed in a group from #8 to #32 all worth $3 each! What? How could such a cool 1st appearance be only worth $3? I immediately put it aside and planned to set things straight with a well deserved Undervalued Spotlight.

Writer John Ostrander (Suicide Squad) and artist Tim Truman introduced Grimjack in “Mortal Gods”, an eight page back up story in Starslayer #10. Ostrander later claimed that then Starslayer artist Lenin Delsol was helping him develop the character in the months before Truman came aboard. Often an artists rendering of a character can help make or break the creation, personally I like Truman’s details and enjoy the overboard costume and the way he gave Grimjack that grizzled look. 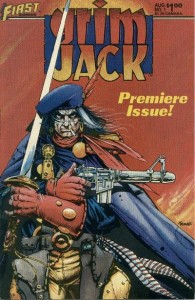 Grimjack was an instant fan favorite and appeared in 9 issues of Starslayer. He received his own title in 1984. The Grimjack title lasted a solid 81 issues ending in April 1991. Grimjack #26 is a highly collected comic book in itself; it features a Teen Age Mutant Ninja Turtles cameo, only the 2nd color appearance of the TMNT!

Grimjack is the nom de guerre of John Gaunt, mercenary, ex-child gladiator and veteran of many wars and scraps oh yeah, and his father tried to kill him when he was 8 years old. He’s as nasty as they come and he works out of the Pit, a slum area of Cynosurre, a city to which all dimensions connect. Cynosure is populated by aliens, gods, mutants and magicians, dames, vampires, robots, hoods and the place is rife with corruption. This is Grimjack’s world, not a nice place to visit for sure.

Cynosure’s lack of parameters and rules allowed Ostrander a wide range of stories. Ostrander mixed sci-fi, noir, fantasy, mystery etc as he saw fit. Stories were limitless and I thought Ostrander did a great job.

Grimjack is alive and well today holding a kind of cult status. IDW is producing a top notch series of Graphic Novels reprinting the original series. Grimjack is a great example of a small press Copper Age property that is enjoying renewed interest.

The 41st edition of the Overstreet Price Guide shows $3 as the price for the 9.2 grade.