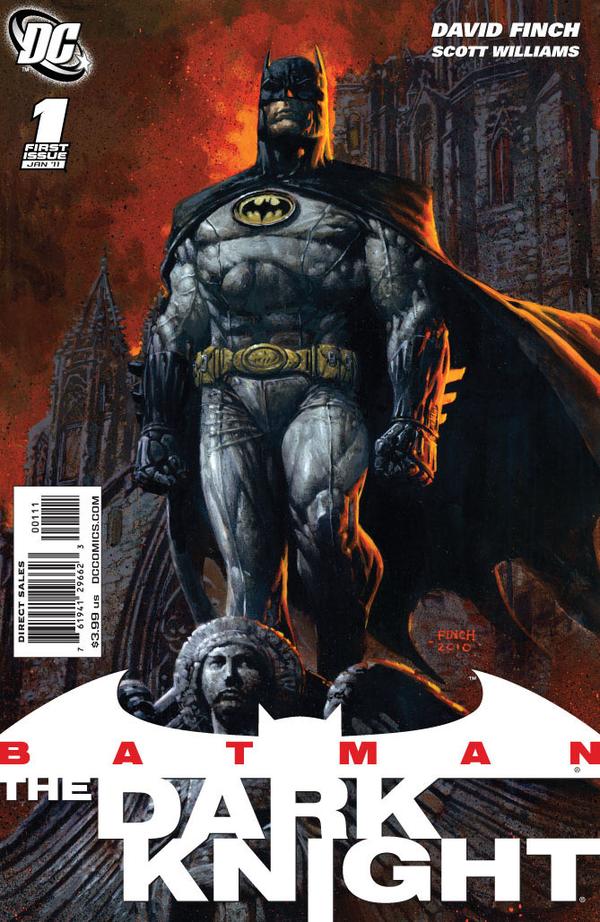 Welcome to the Bat Cave. Again. With a colony of Bat titles coming our way in the last month or so, David Finch’s Dark Knight has been promoted heavily despite the other titles connected to Batman Inc. I’m left to wonder what’s going to differentiate this from the other Bat-titles, and whether Finch can deliver a good Batman title alongside Morrison’s classic-in-the-making works.

After traveling back through time to the present, Bruce Wayne has resumed his duties as Batman. Taking to the streets wherever needed, Wayne has expanded his operations globally. But what would bring him back to Gotham? When a childhood friend disappears, Bruce is prompted to return to the city he’s sworn to protect. Enter the Dark Knight. 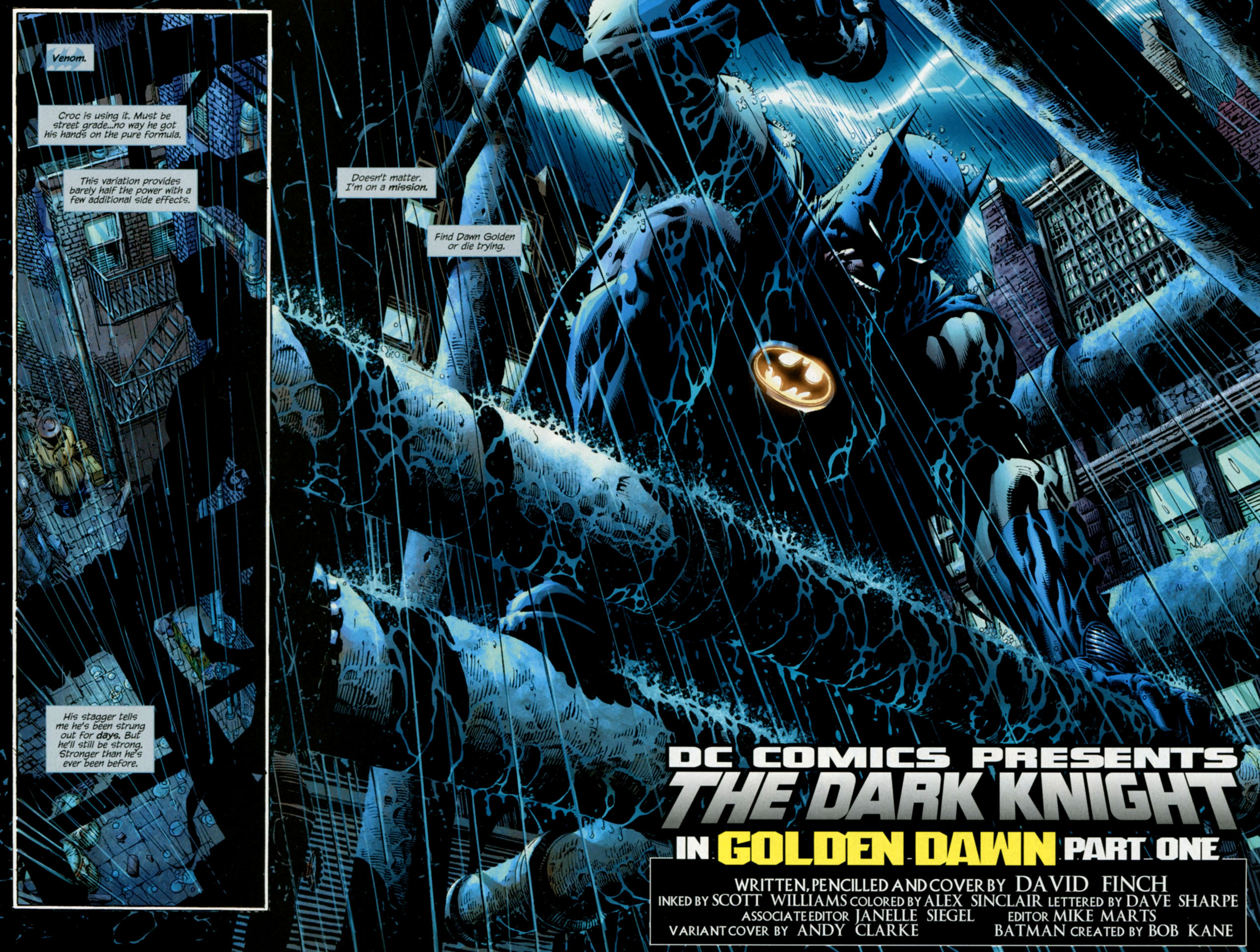 Growing up she spent time at his house, played with his toys, and lost his kite. She also took his heart it would seem. Dawn Golden has gone missing, and ever the determined individual Bruce has made a point of solving her case. With no clues to speak of, the police department simultaneously tries to solve the case while warding off the advances of the media desiring any morseled tidbit for print or broadcast. Back in the dark alleys of Gotham, Batman awaits his own lead. It comes crashing into view when a rather physically fit man is flung through a metal door, followed by a much larger figure covered from head to toe by a trench coat and hat. Bruce tracks the figure down the alley and pounces on him, only to be stopped by his immense strength. Batman eventually outsmarts him and subdues him. It’s revealed he has been taking a drug known on the streets as Venom. After tricking him yet again, Batman gets the information he needs and moves on. Back in the Batcave, Alfred questions Bruce’s desire and drive to solve this case, worrying that it’s become an obsession for him. Following up on his lead from his alley “friend”, Bruce enters a meat shop called The Boom Room. He breaks into a safe in the main office, but finds nothing of importance; save a gold necklace. It’s the very same Dawn had worn as a child. Bruce is interrupted by a familiar voice and his henchmen’s cocked guns as the issue ends with a cliffhanger.

I really enjoyed the art in this issue. Finch’s landscape panels on the second and third pages were nicely drawn, while Sinclair’s colours bring the best out of Finch’s pencils. Looking closely you can see individual blades of grass, definition on a tree’s bark, even a slight misty tone on Wayne Manor to accentuate its distance relative to Bruce and Dawn. Finch also turns in some great work during the alley scenes where a snarling Killer Croc terrifies the life out of a homeless man, rain and saliva dripping all over his face. Following this, Finch offers a fantastic scene of Batman sitting atop a building with the pouring rain beating down over him that calls to shades of Jim Lee’s artwork on the original Hush story. Continuing his rather cool looking villains, Finch offers another rendition of a Bat-Villain in perhaps one of his more monstrous incarnations. Finch’s Penguin reminds me of Danny DeVito’s portrayal of the character in Batman Returns, down to the serrated teeth.

Initially I was suspect of the page layouts. The early pages are very straight forward pertaining to how panels are situated on the pages. They’re very clean and conservative boxes or rectangles stretching across each page. However, it seems like Finch used that style because it fit the story tone at the point. The shift at the half-way point is a nod towards that theory, as Finch employs more creative uses of his pages by shifting panels around, creating successive diagonal panels that ask you to follow the action with your eye. Altogether the artwork is solid, while Finch adds detail to his characters whether through the aforementioned environment panels, a swirl of smoke from Harvey Bullock’s cigar, the expressions on the character’s faces and the emotion in their eyes, and the beating rain off Batman’s cowl. 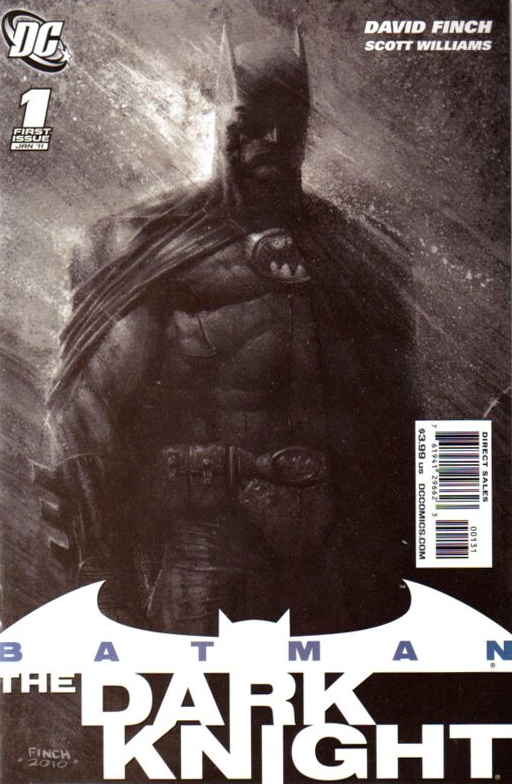 While the artwork was tremendous, the story was a little perplexing. It really feels like Finch jumped too far into the action with his first offering without offering context to the reader as to why we should care about the Dawn Golden character or how Bruce feels about her. I don’t feel like three pages was enough time to plant the seeds for glancing readers regarding the importance of this newly conceived character to warrant another read. I feel though that Finch will probably use a similar technique in following issues where he will gradually reveal why Bruce is motivated to solve Dawn’s case in the form of similar three page stretches where bits of history will be revealed incrementally. There’s a glaring disconnect though between the history of the characters and Bruce’s obsession that needs to be addressed, because otherwise the reader is left to ask, “Why should I care?”.  Without that context, the pieces of the puzzle can’t fall into place and creates another disconnect between the reader and the writer’s intention.

Differing from Morrison’s Batman Inc., it feels like Finch’s Dark Knight will intently focus on Bruce centric stories that are more of the classic detective ilk where story arcs will be some sort of mystery that requires solving. This feels like one of those thus far, and I think there’s something here where the pay-off could be worth an extended stay on the title. It was an okay first effort, although I feel more time was needed to contextualize the relationship between Dawn and Bruce in order to hook the reader in. Even still, there’s enough here to at least warrant a second read to gain a better understanding of where Finch is going with his story.