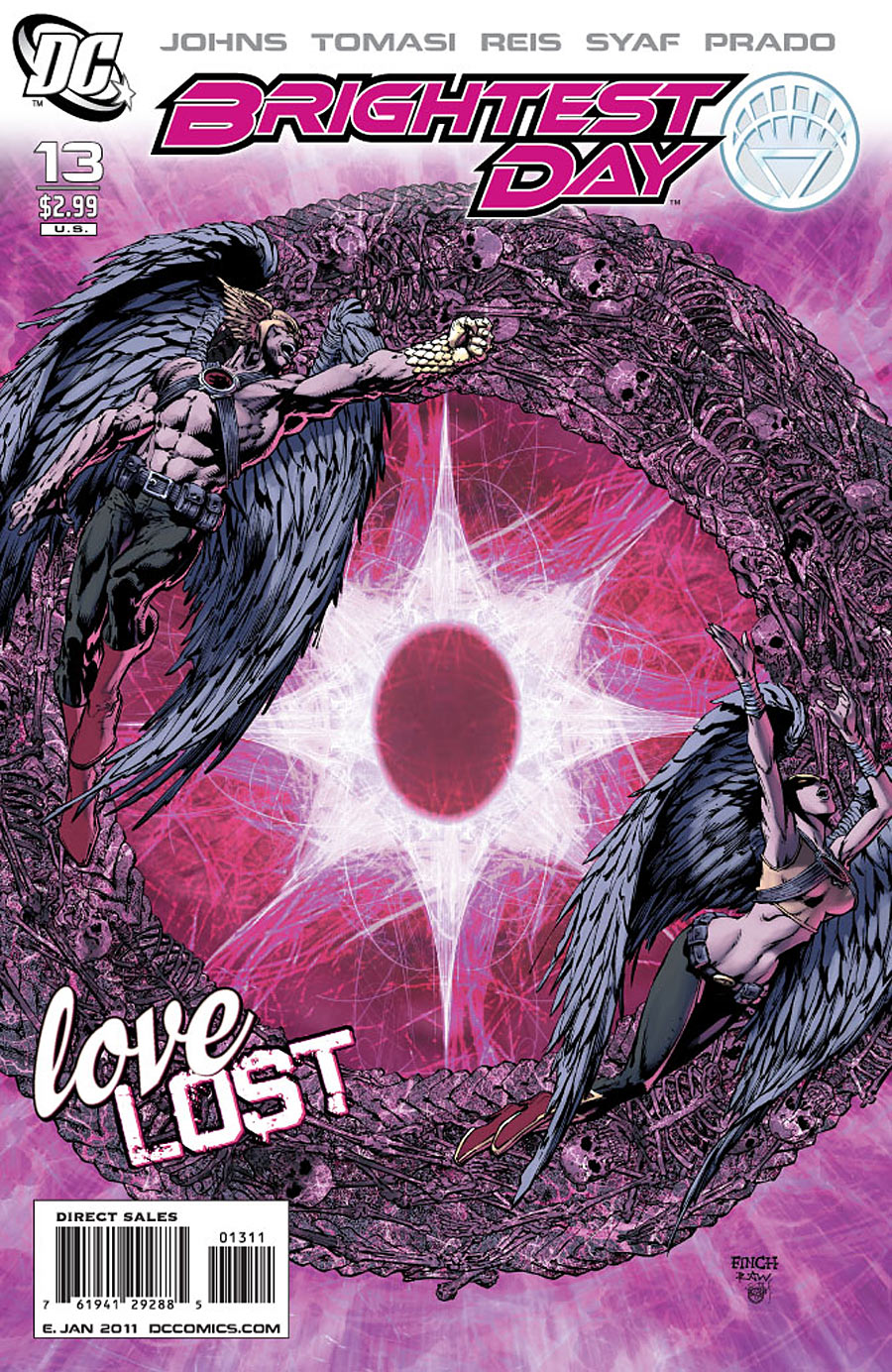 Welcome to comicbookdaily’s review of issue #46 of the Hawkman series. Let’s have a look!

Twelve heroes and villains return from beyond, each given a purpose by the white entity. With the completion of each of their tasks, the world will be one step closer to heralding the rise earth’s greatest protector.

Joking aside, the latest issue of Brightest Day kicks off on Hawkworld after several issues focused elsewhere. The issue begins with the battle joined in progress between the Hawkman led beasts, and the hawks. With much of the issue focused on the battle itself the issue progresses quickly, and does so fairly brutally. In one scene, Hawkman interrogates a hawkperson, making him regret not cooperating sooner. 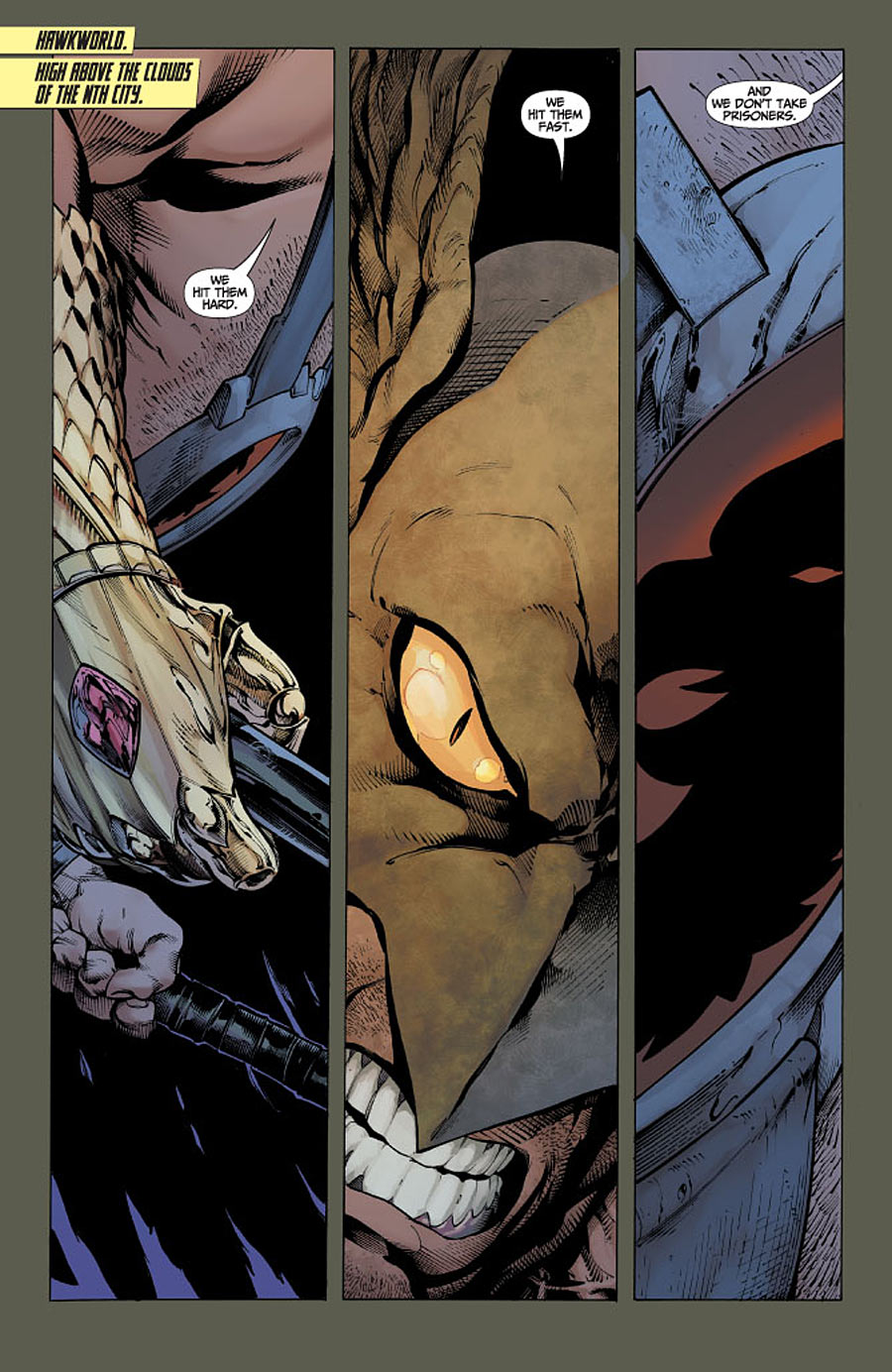 Inside the Nth city, Shiera, her mother and Hath-Set continue to get reaquainted. We learn more about the history between Hath-Set and Shiera, and more, we discover the history of her mother and how she survived her own death. What’s more interesting is her aspirations for Egypt as a ruling power and the lengths she went to assure Egypt would rise.

As Hawkman approached, Shiera is nailed to the dimensional gate composed of hers and Carter’s bones from their previous lives; it activates once she’s in proximity to it. As Carter approaches, Shiera grabs Hath when distracted and perhaps end the cycle of violence that’s plagued their lives for so long. Unbeknownst to them all, with Hath, Carter, and Shiera all in proximity to the gate, Queen Shrike’s plan takes full form. With all three in place, Shrike enters the portal and arrives at her destination, her next conquest. The question is, has this predator met her match?

Back in Gotham, Dove and Brand rest inside the Watchtower until they notice a familiar scene in the Gotham sky. Apparently Earth has its protector.

As a whole, the issue’s art was solid. While some of the story’s art flounders, Syaf, Reis, and Clark have continually turned in great efforts between their Hawkman, Brand/Aquaman, and Firestorm assignments. This book, with its focus on Brand and the Hawks, is one of those issues that continues to enable me to say, “the art is stellar.”

There’s a particularly vicious scene very early where Hawkman strikes one of the Hawkpeople across the left side of its face with an Nth mace. Where it 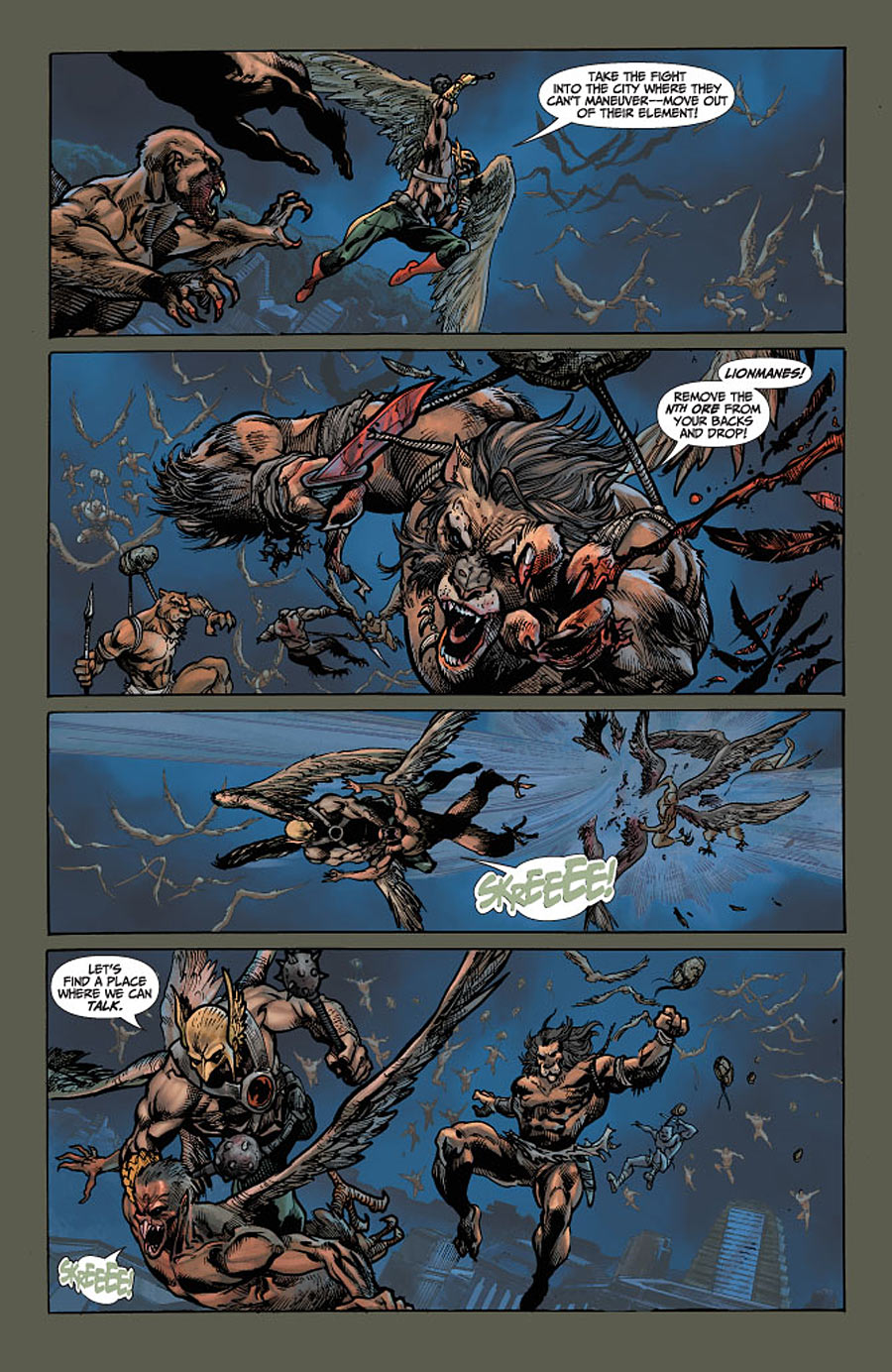 connects, splatters of blood fly from its head. Perhaps some teeth too. In other torturous scenes, Hawkman cripples a prisoner’s wing, and tears it off when he asks politely where Shiera is. The pages display the uncompromising brutality of Carter and Shiera’s lives, and it does it well.

The pages with Hath and Shiera are somewhat disturbing, showing almost a sexual, perverse love for the pain he’s caused both Carter and Shiera. He actually licks her face quite creepily, to which she spat in his face. Hilariously.

As a whole, the art has a very primal feel to it, which syncs up well with the type of lives Carter and Shiera have led. There are some strangely drawn panels of Carter though. Any page where he’s drawn to look in a certain direction, he’s drawn awkwardly where his eyes will shift in one direction, his face in another. In another case where he’s attacking Shrike, I feel like his eyes should be less centred than they are. Judging his trajectory, it seems like he should be less focused on what’s directly in front of him, and more on the person he just punched.

The final page of the Hawk story is pretty cool looking, and let’s leave it there.

As for the final pages once we arrive at Brand’s story, there’s a great contrast between the character’s costume and the moonlit sky.

If you’re not a fan of the Hawks, you probably won’t have liked this issue. Save the final two pages, the entirety of the book is centred around the story of Carter and Shiera. The story has slowly become more interesting as it develops, at least holding my attention in spurts. Although not a fan, the story was readable. There were times though where I felt the urge to 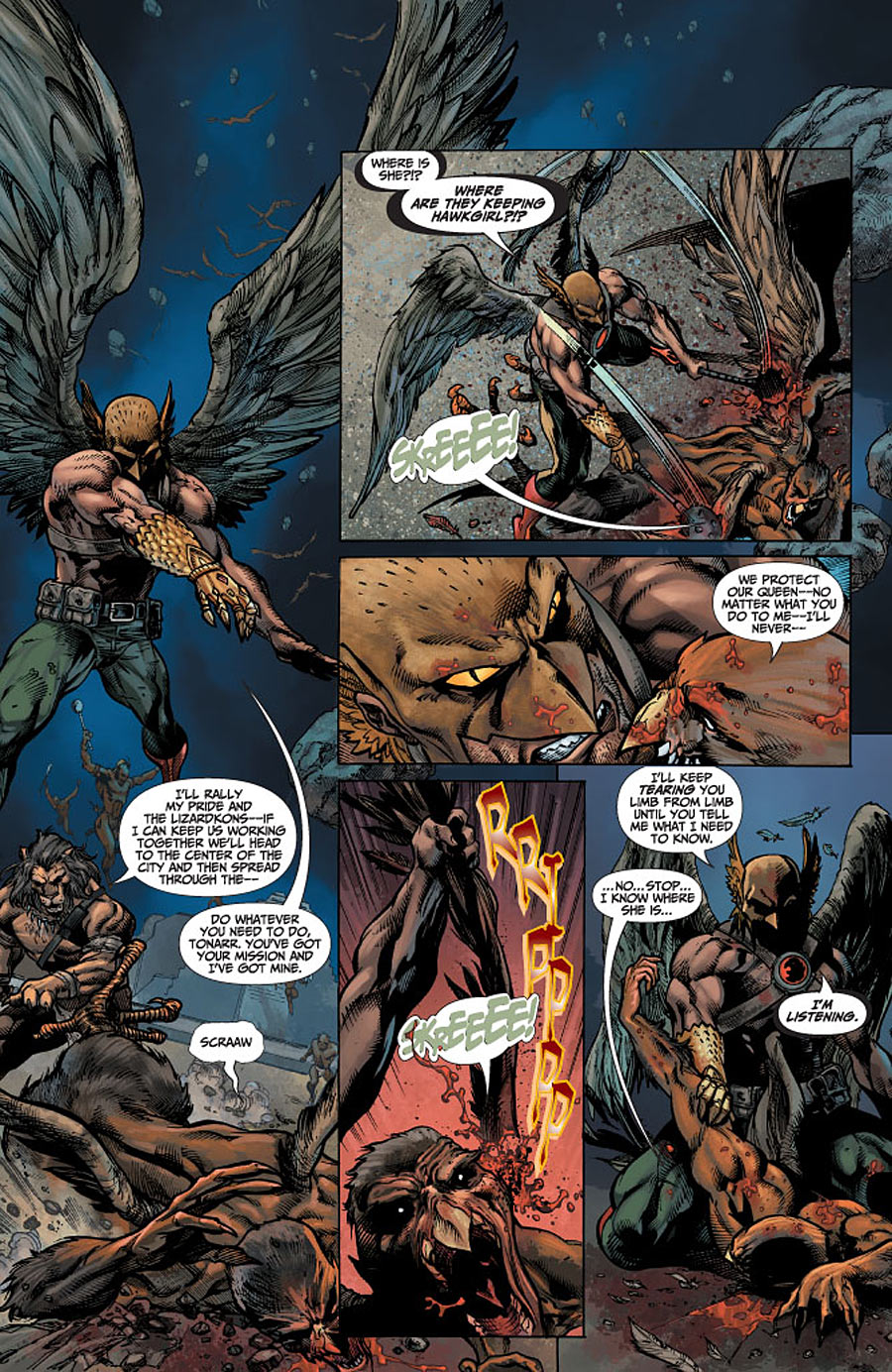 skip through some of the issue, and I’m not sure whether that’s a knock against the story or my disinterest in the characters. Storywise, Johns and Tomasi are doing a good job of making their story worthwhile. Yet, I don’t really get excited about the prospect of reading their story like I would Brand’s or Firestorm’s, both of which I enjoy. I see it as a good story that has its niche, and does that well. As for the final page, it’s a twist. If you’ve not at least peaked at the final page I suggest you do so. I’m not sure how many people expected that character, but the timing does fit so it’s not far-fetched.

I didn’t overly enjoy the issue, but I didn’t dislike it either. I do think it’s a bad idea to lump one story together in a book like this after not seeing it for several issues. As I’ve said numerous times, it ruins the story’s flow and momentum when you’re taking three or four issue breaks from it for something altogether uninteresting like the Martian Manhunter story as an example.

What now? Do we not see Hawkman and Shiera for ‘X’ issues now? After several issues where the book held some structure in its story telling, it’s off the rails again.

For all you folks out there not following this series, I would suggest only buying the issues featuring characters you like. Then if you’re so inclined to do so, buy the trades. Otherwise, with issues like this, you’ll be wasting your time and money. I believe the trade will be much better and much more seamless, but as individual issues I just can’t say the same.