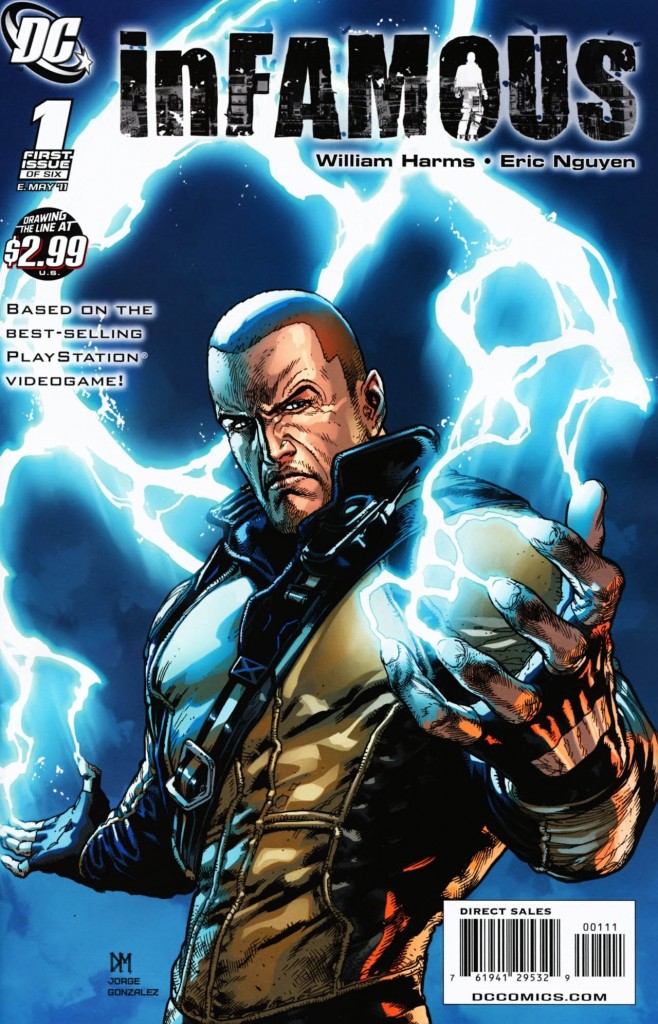 Continuing the recent trend of adapting video games into the comic book format, the mini-series inFamous brings us back into the world of Cole MacGrath in the aftermath of the Playstation 3 video game. It was quite good, but the question I wonder is whether the game has been smoothly transferred into comics. Let’s see, shall we?

After an explosion from a bio-electric device called the Ray Sphere detonated in the heart of Empire City, Cole MacGrath was granted the power to control and manipulate electricity from all sources. After fighting and defeating Kessler, the orchestrator of the massacre and subsequent plague, Cole does what he can to pick up the pieces of his fallen city as he prepares for the arrival of the Beast.

Four months before the events of the video game, Kessler experiments at the First Sons Research Facility with Moya where he explains how the Ray Sphere is going to work. He continues to experiment on a young man named David. Next we’re shown the events leading up to the massacre as Cole couriers a package containing the Ray Sphere to his destination. Kessler calls him, and the package unleashes an electromagnetic net leaving many dead, and Cole’s life changed forever.

A month after the event, Empire City is in shambles. People are starving, dying, and barely able to survive as the city’s quarantine continues despite false assurances from government authorities that all is well within the city limits. Cole visits the grave of his now-deceased girlfriend, Trish, lamenting to a prison warden about everything Kessler took from him. Much later, Cole tracks down some of the First Sons and devastates their ranks with a single attack. A fire fight breaks out as the warden and a unit of police officers arrive to help. One of the first sons fires off an RPG towards the warden which Cole wards off with an electric attack. With the contingent of First Sons agents beaten, Cole shocks them once more to finish the job. Cole’s former friend Zeke arrives, with Cole leaving soon after to recon the area to ensure there aren’t anymore First Sons left in the area.

Later at Eagle Point Penitentiary, Cole and Zeke sit around a fire and quickly begin arguing about everything that happened since the Ray Sphere detonated. Cole fills Zeke in on the complete story behind Kessler, his arrival and his ultimate defeat. Cole walks off, as a large monster from within the First Sons labs rises in the Neon District.

Empire City is not a pretty place and the art accurately captures the atmosphere of the city. Nguyen offers comparative work of the city both before and after its devastation, contrasting well a kept city landscape against the darker, drabber states of the citizens’ lives after the Ray Sphere event.

The highlight of this series where the art is concerned is the prominently featured electrically generated powers of Cole. By extension, that mastery bleeds into the environment whether referencing the controlled experiments of Kessler in the past, or more open, natural/unnatural events in the open city landscape. Nguyen does these pieces quite well and he is poised to deliver throughout the series with some awesome visuals.

There are stretches of work though were some of the work feels flat, where the inking doesn’t quite offer as much depth perception as it could; the characters don’t really pop off the page. There are definite exceptions though, such as when the man is writhing on the experimentation table, during the entire fight between the city’s remaining police officers and Cole against the First Sons, and the four-armed creature that seems poised to attack Cole. Overall Nguyen offers some solid, gritty work throughout the first issue that supplements it with some awesome electric-based visuals.

Let’s be clear right off the bat, if you haven’t played the inFamous video game for the Playstation 3, you will be confused as to what’s actually going on in the story. The issue does the bare minimum to explain the backstory of the video game, nor is the relationship between Cole and the supporting characters explained. If you’ve not played the game, you’ll be left to ask, “Who’s Kessler, and why do I care?” “Why is Cole upset with Zeke, but why does he trust a prison warden.” “What happened to Trish?” From the perspective of the new reader, these are but some of the questions I would be asking because Harms barely touches on them. It fails in most every respect to bring new readers into the story’s environment and hook them for the forthcoming sequel to the original game.

Yet, as someone who is familiar with the subject matter I felt it was a good book that is going to fill in the gaps between the two games, and hopefully builds upon the story possibilities left dangling after the game ended. Cole is an extremely powerful character both in his abilities and in the raw emotion or power that drives him. That’s a compelling piece of his story as he moves closer to his eventual showdown with the Beast. I felt Harms did a good job in writing a story that anyone who played the game is going to be able to slide back into.

Like the Assassin Creed series, this six-issue mini-series is intended to expand the universe of the video game into a more multimedia environment. It’s a dangerous proposition though and I’m not convinced it did a suitable job to expand that universe. It certainly caters to fans, but likely will fail to capture the interest from the random comic reader perusing the new releases over the next few months.