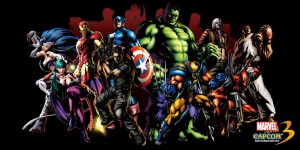 So over the last couple of weeks I have had a chance to sit down and play the much-anticipated Marvel Vs Capcom 3. The latest fighting game in the VS series from Capcom, the title is fantastic fun, and a shining example of fan service done right.

The basic premise is simple: characters from the Marvel Universe face characters from various Capcom video games in 3 on 3 combat. There is some pretty flimsy story about the villains of both universes working together to steal Galactus’ power  (written by industry hack Frank Tieri) but the story is never really a key part of the fighting game genre.
Each character has been extensively researched by the creative team behind the game. Costumes, move-set, dialogue, and story are all meticulously presented for character continuity. As an example the Sentinel has different dialogue when facing mutant enemies, Spider-Man can change to his Black Costume, and Thor has a variety of hammer and lightning based attacks.
There are 36 characters (18 from Marvel and 18 from Capcom) in the game and each has a unique ending (also written by Frank Tieri). The endings are hit and miss and are my most favourite and most hated part of the game. Wolverine goes to a strip club where Morrigan works (completely idiotic and of course that is what we all would do after defeating Galactus), Captain America gets a commendation from the President (very creative Frank), and Modok steals Galactus’s hat (okay, that is pure genius). 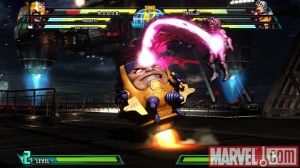 The controls are simple, and anyone can pick up the game and have a great time. Roll-up all of the above with tight, easy-to-navigate online play and you have a solid, solid game that will please any comic book fanboy or girl.
But this column isn’t a review column, so I will not simply gush over the title, but use it as an excuse to discuss adaptation at a larger level. The main reason why the game succeeds is that it respects the source material and uses it to create a new product. Movies, video games, toys (sorry, action figures), and books all could learn a lesson from the Marvel Capcom franchise.
It isn’t possible to directly transfer creative works from one medium to another. They are different, and we all understand that. So when we go to the movie theatre we don’t expect the Thor movie to be a shot for shot remake of Journey Into Mystery issues #83-87. However, we do expect that the source material will be respected and Thor will not be a friendly robot that shoots ice-cream out of his fingers (although, note to self…).
That was an extreme example, but take a look down the toy aisle the next time you are out and about. Toy companies on the whole do a pretty garbage job (although some are great: Matty Collector, DC Direct) of respecting the source material. Hey! What about a Punisher Toy that transforms into a gun! Or maybe Superman could have a flying car! Or the Flash could have a motorcycle! Yes, those are real toys. Obviously some toy exec said “Now this Flash can run really fast, but what about when he just wants to fight crime on his Flash Cycle”. And someone probably said “Um, the Flash doesn’t have a motorcycle because he doesn’t need one”. And then that person was fired. 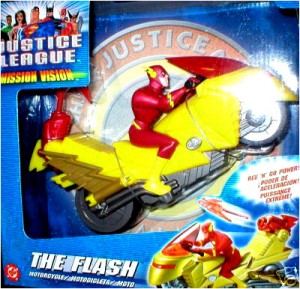 The reason that all toy geeks talk about Super Powers being the greatest toy line ever is that it didn’t have a bunch of stupid stuff. It just had all the classic DC figures with classic costumes, actions, and accessories. Guest what the Flash figure came with? Nothing. He didn’t have a Flash bazooka that shot a plastic stick. Because that is asinine. 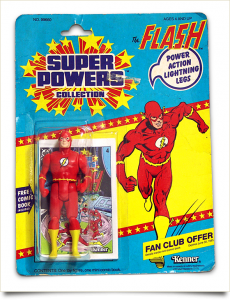 Companies would be much better off if they read a comic book series and made appropriate adaptations. Changes are possible, and sometimes required for the shift in medium, but respect for the source material should always the primary consideration.
# dc direct toys# toys# video games# videogames