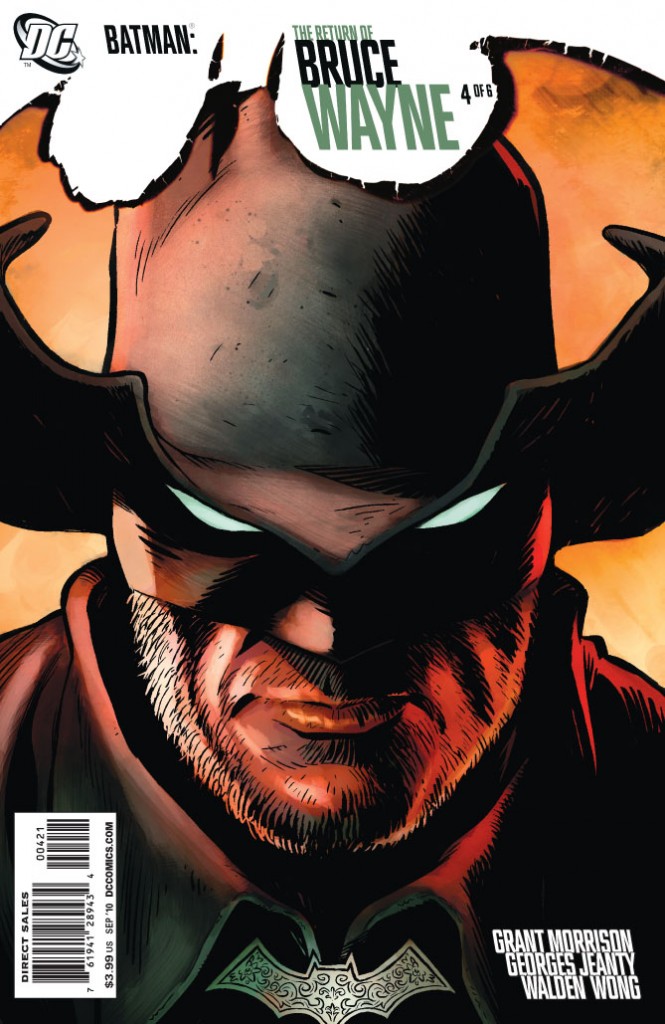 There’s something strange, in the neighbourhood. Who you gonna call? Bat-Zorro!

Welcome to another review of Grant Morrison’s Batman mini-series, The Return of Bruce Wayne. We’re up to issue four now and things are starting to heat up a little in the series. With new revelations of the Wayne family’s past revealed and another chapter in Bruce’s time travelling journey written, where does this leave the Dark Knight? Let’s take a gander, shall we? 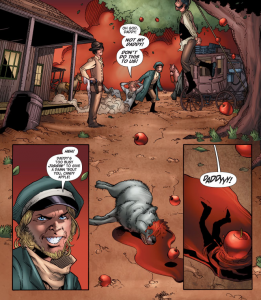 Issue four picks up in the Wild West, as a man is hanged from a tree and forced to watch his home burn and ransacked by thieves as he dies. The thieves search for a relic, a small rectangular coffin with a bat symbol on its face. They continue to assault the family until the couple’s son jumps into protect his mother before being shot himself. The men leave, leaving the woman to hold her lifeless son, praying for a dark avenger to seek retribution. And he arrives, utility belt and all.

The next scenes bring Jonah Hex back into the picture, meeting his benefactor for his bounty hunting job on the mysterious avenging stranger in black. They quickly converse about the job and payment, as well as what’s behind the door nearby. After a quick exchange, we meet up with Bruce in the middle of the streets as he faces down four outlaws. He confronts them and throws batarangs into their shooting arms as they try to fire, effectively disarming them. Flashing back to Hex and his benefactor, he leaves along with his bounty, hot in pursuit of the mysterious stranger.

In the next scene we find out what was behind the previously mentioned door, as it’s revealed a “qualified doctor” is interrogating a young woman who holds the secret to opening the rectangular case. The woman begins to refer to a dark god opening his box, and there are bells. She says that these bells summon another from the shadows at the end of time, one who won’t stop until the wicked are held to account. And he’s here now. The shaman who had been trying to get the woman to speak berates the doctor for his methods, catching a bullet from the good doctor for his troubles. The good doctor’s name? Dr. Thomas Wayne. His partner and Jonah Hex’s benefactor? Someone who’s only referred to as Savage. 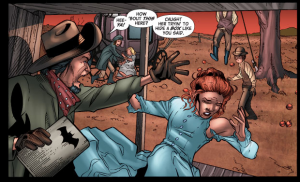 Next we catch up with Bruce up to his old tricks, using smoke bombs to distract and deceive his foes. As Savage and Thomas Wayne try to escape with the woman, Bruce gives chase and eventually runs their wagon off the road. After incapacitating both Savage and Wayne, Bruce goes to the woman, who hands him the small rectangular box with the bat symbol. She whistles a tune and Bruce opens the box. His eyes widen and he gazes into the box and its contents, while Thomas Wayne who’s now come to his senses proclaims the contents to be his. Bruce proceeds to rough him up a little, but Jonah Hex arrives to collect his bounty. He and Bruce face-off at a nearby dock, and although he tries to quickly draw and throw a batarang, Hex fires his gun and wounds Bruce. He falls into the water and transports through time as he has in past issues. We spring forward in time once again to a man with dark hair stumbling about the streets of a modern Gotham. The man stumbles onto a busy street and collapses. Still the holding the rectangular box, the man lays there, bleeding from his stomach from a gunshot.

The book continues its rotating cast of artists with this issue, bringing Georges Jeanty of Buffy the Vampire Slayer: Season 8 fame on board to do the penciling in this issue. For the most part though, it’s hit and miss. There are panels where the art is quite well done. Pages that jump to mind include our first look at Bat-Zorro early in the issue where Bruce ominously stands in the rain as the lightening crackles behind him. Others include Thomas Wayne’s interrogation of the young woman, Bruce’s scuffle with the woman’s abductors and the final pages as he arrives in what I assume is pre-Batman Gotham City. Jeanty’s style though doesn’t lend itself well to Jonah Hex, who’s scarring is badly drawn and doesn’t come across as well as it could. I recall an earlier page where Hex’s face just feels incomplete, which is a disservice to Jeanty’s otherwise solid art.

Avina’s colouring though doesn’t come across that well in some pages. Although there are pages where it’s quite good, in the scenes where characters are crying for example, the tears are coloured in such a way that it looks like they’re kind of just layered over top the character’s face; caked on and feeling unnatural. It looks more like they’re wearing paint, the tears just feel lifeless and its hard to establish a connection with them and their emotional state. What I liked about the art is the minor nuance within the book regarding the weather. Throughout the book it’s raining constantly, even when Bruce has travelled further into the future (his past). It’s both a nice maintenance of continuity throughout the issue, while also enhancing the thought that Bruce is being forced to live through a succession of lives and deaths. It’s only natural then that the weather and his wounds would accumulate and continue forward. Despite some misgivings I have about Jeanty’s artwork and some poor colouring, this was a nice touch to the issue.

The book continues to push Wayne further towards his destiny, nearing ever closer to his return to contemporary Gotham. In this issue we see several things introduced and clarified. Foremost, it’s likely that the Savage in this issue is Vandal Savage, whom I thought might be involved after the first issue of the series. Secondly, we’re introduced to a Thomas Wayne, who’s a doctor no less similarly to Bruce’s own father. If that’s the case, it poses interesting questions as to Bruce’s past and the nature of Thomas Wayne’s life. Is his father dead? Is this Thomas Wayne and his father one and the same? Is this Thomas Wayne Dr. Hurt? The identity of Hurt is no less clear, but certainly more interesting if he’s in fact the same man who Bruce foiled in this issue. Constant reference is made in the issue to the end of time and the birth of an avenger, while also mentioning a dark god; more than likely a reference to Darkseid.

The book continues to maintain a sense of mystery about it, as we near closer to the book’s conclusion. The mysteries surrounding the small rectangular coffin with the bat symbol and what exactly its key unlocks are captivating in their subtle way. It’s clearly an important plot point, one which we’ve only gleamed over so far. This is another solid issue for Morrison, developing the Batman mythology piece by piece with each passing issue, bringing his grander vision of the Dark Knight even closer to realization. Now with Bruce back in at least a modern Gotham and the coffin opened, it appears the story has reached the cusp of its climax. Hold on folks, this could be a doozy. Until next time, same bat time (probably not), same bat address (not entirely accurate, it’ll be a different address. This is the web after all). 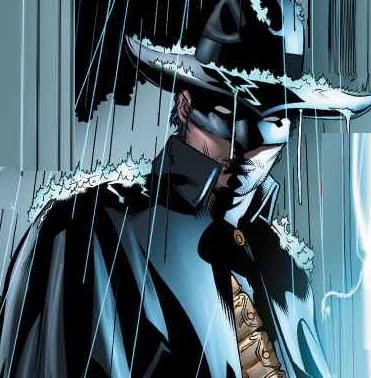