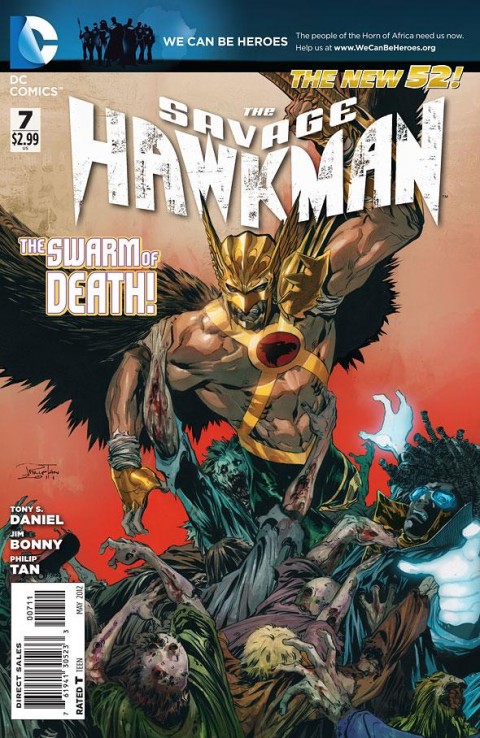 Hawkman is one of DC’s more notable characters that has never quite caught on with comic fans beyond its core base. Most recently Carter Hall figured into the company’s Brightest Day maxi-series, before mostly fading to obscurity prior to the “New 52” relaunch in Sept. 2011. Prior to its first issue, the series was touted as featuring Hawkman in a more violent comic with a vicious tone unseen in previous iterations.

Now seven issues into its run, it’s difficult to really tell whether the hype has matched the story. Judging by this issue, the plot feels very flat and disengaging. Savage Hawkman #7 is the conclusion to the Rise of the Dead story where Carter had unearthed an orb which was subsequently stolen by Gentlemen Ghost. He had intended to use the orb to resurrect himself at the cost of killing everyone in New York City. The majority of the installment features Hawkman flying above the streets, swooping in to save civilians all the while attempting to avoid the mobs of zombies trudging towards their lunch. These events feel very insignificant though, and as a conclusion to the arc, it sends Daniel and Bonny’s tale out with a whimper in the form of a lackluster battle with Gentlement Ghost. For a book which was positioned as an action-heavy, violent romp, the issue was disappointing. The inclusion of Static felt unnecessary and random considering their lack of a mutual history. The elements which made Hawkman interesting in Brightest Day are absent, leaving a monotonic, bland representation of the character.

The artwork doesn’t help the book. The title character is drawn strangely in respect to his helmet, while the weapons used both by Hall and the dimensional jumping specters are cumbersomely drawn, look unrealistic and appear sloppy. There are instances where Richards  does excel, such as the opening page depicting Hawkman standing atop the Brooklyn Bridge with the pale moonlight, coloured nicely by Gho, shining across the East River. Below, the horror running amok in the streets is summed nicely by the grotesque army of undead minions rampaging towards fearful New Yorkers. The scene expands further as the citizens begin to run in the opposite direction from the zombie horde as Hawkman swoops into action to protect them. The initial meeting between Static and Hawkman bears resemblance to the opening page, and in this the artists do a nice job with both characters standing in front of the moon, mimicking the moonlight effect from earlier. A final gem is provided at the bottom of page 15 once Julius Gates attacks Gentlemen Ghost. The purple dimensional gate, combined with the green specters contrast the otherwise dull tones featured in the rest of the book to help liven the artwork. The final pages felt weak though, leaving an uncertain feeling concerning the future of the book’s art.

The purpose of Brightest Day was to ultimately reintroduce a number of DC’s characters to the mainstream front of their properties. Coming out of the series in a good position, Savage Hawkman seems to have squandered Carter Hall’s momentum with this well-hyped story which ultimately doesn’t seem to have delivered the promised experience. This issue was largely uneventful, concluding with a poor end to the story that feels very anti-climatic. Hawkman’s antagonists are limited, and in turn editorial appears to have injected obscure characters into the mix to fill the void. Without a clear antagonism Hawkman falls flat in this series, which is unfortunate for a series which conceptually held promise but fails to live up to its title.