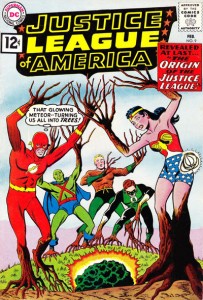 DC’s new Justice League has dominated the comic sales charts since the book launched DC’s New 52 back in the last week of August 2011. The title has been the best selling comic every month since.

It was by no accident that chief architect of DC’s New 52 initiative Geoff Johns chose the Justice League to herald in DC’s new era. No other vehicle could match the star power and the all encompassing story telling options like Justice League can.

Though this weeks undervalued pick Justice League of America (JLA) #9 will likely outsell the new Justice League #9 (we’re at #7 as of this post) by about 3 times the initial JLA #9 was by no means a sales leader, according to the comichron website JLA’s were selling about 340,000 issues back in 1962, less than half the 740,000 issues the #1 selling Superman title was pushing out.

The Justice League of America was of course the reincarnation of the Justice Society of America (JSA) first introduced back in All Star Comics #3 (Winter 1940). By 1960 DC had dusted off and re-invented Golden Age characters like Flash and Green Lantern and in hindsight it just seemed the natural progression to re-interpret the JSA.

The new JLA were introduced in Brave and the Bold #28 (March 1960), the team was an immediate success. Stan Lee has noted that his boss Martin Goodman tasked him with coming up with a team after Goodman was told by DC execs how well the JLA was selling. Stan Lee and Jack Kirby came up with Fantastic Four #1. 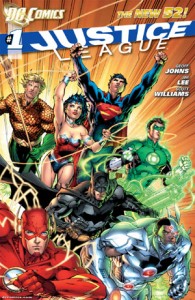 JLA #9 features the 26 page story “The Origin of the Justice League”. Gardner Fox gets script credits while Mike Sekowsky gets the pencil credits. The story is kind of a 2nd anniversary issue where the founding members (Aquaman, Batman, The Flash [Barry Allen], Green Lantern [Hal Jordan], Martian Manhunter, Superman and Wonder Woman) tell local teenager (and sometimes member) Snapper Carr and the newest member Green Arrow [Oliver Queen who joined in issue #4] how the League formed.

Basically the Earth was attacked by aliens called the Appelaxians. The Appelaxians sent warriors to Earth to see which of them would conquer the Earth first and thus prove his worth as the new Appelaxian leader. Earth’s heroes individually respond to the threat and after some difficulties repel the attack thanks to team work. Thus the formation of the JLA.

JLA #9 is a very important comic book. It’s origin story has been repeatedly tinkered with in the 50 years since it was first published. Later origin tweaks had Batman in, then he was never in, then he was in again. Another change had Black Canary as a founding member, yet another had a guy named Triumph. Writers like Mark Waid, Grant Morrison, Brad Metzer all tinkered with the origin to suit their takes on continuity, I mean come on, what the heck was wrong with the JLA #9 telling!

In the end though we must all look to JLA #9 as the initial JLA origin.

As of this post there are 174 CGC graded with a Universal (un-restored) blue label, of these only 38 are graded at 9.0 or better. Interestingly the CGC 9.0 copies have been selling for just below the Overstreet Guide values while you can pick up CGC 8.0s and 9.2s at just over the guide value.

I think you should be picking up CGC 8.0, 9.0 and 9.2 copies at close to guide values. This is a very important issue of DC’s flagship team book and it dates back to the early Silver Age, a very collectible era! Picking a high grade copy up for less than $1000 will prove to be a bargain.