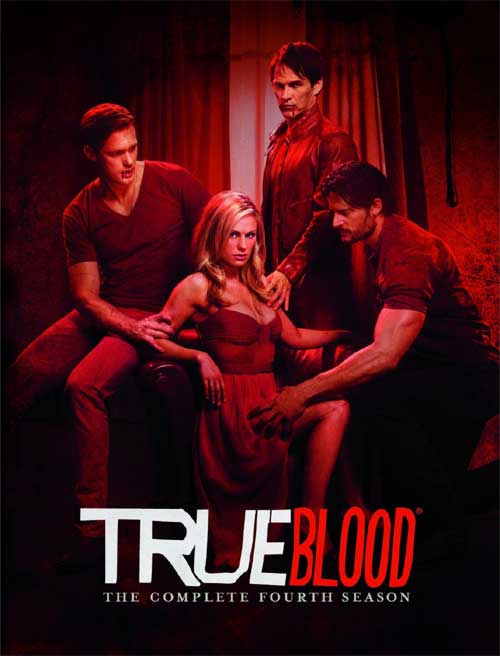 It is hard to explain True Blood to anyone who has never seen the show. Not because it is so deep and complex, like some kind of Proustian opus, but because there is no way to explain the show without it sounding completely ridiculous.

It is, quite frankly, the best worst show on television. It is blood and boobs, hackneyed plots and stock characters, and it is immensely entertaining. So entertaining that I find it difficult to watch only one episode at a time. It is binge television viewing at its finest.

With the pending commencement of Season 5 this Sunday, HBO has released the Season 4 boxed set so everyone can be up to date on the spooky and sexy goings-on in Bon Temps. And everyone knows that the cadillac of box sets in the BluRay/DVD/Digital copy combo pack.

Each episode has excellent picture and sound quality. I know that is a given with BluRay now but it still bears repeating if you are shelling out your hard-earned cash for 12 episodes of vampiry goodness.

Season 4 is a bit of gong show story-wise. To be fair it comes off the best season ever that was Season 3, but it still seems to be all over the place and without a solid ‘Big Bad’ the plot meanders all over instead of having a solid focus. The season also borrows too heavily from Buffy the Vampire Slayer mythos and the Angel/Spike/Buffy triad seems antiquated when transferred to Sookie/Bill/Eric despite the addition of nudity.

Fans of the series will love the season, but even they will be hard pressed to deny that it is the weakest entry so far. That is where the extra features in the set really provide value for money.

The box set is ram-jammed with bonus materials  from cast commentaries to behind the scenes footage , character perspectives, and mini documentaries there are hours and hours of extra viewing for the fangbanger out there.

A nice little feature that I enjoyed is “seamless viewing” if hit play all on any disc and watch to the end of the last episode on that disc then I will be prompted with a series of ‘what happens next?’ questions. You then can simply eject the disc and pop in the next one, and the next episode will start playing right away; there is no need to bother with navigating more menus.

True Blood Season 4 is a must have for any fan of the Southern Vampire Mysteries. If you love the series but are on the fence about picking up this set don’t worry, you will get your money’s worth out of it.