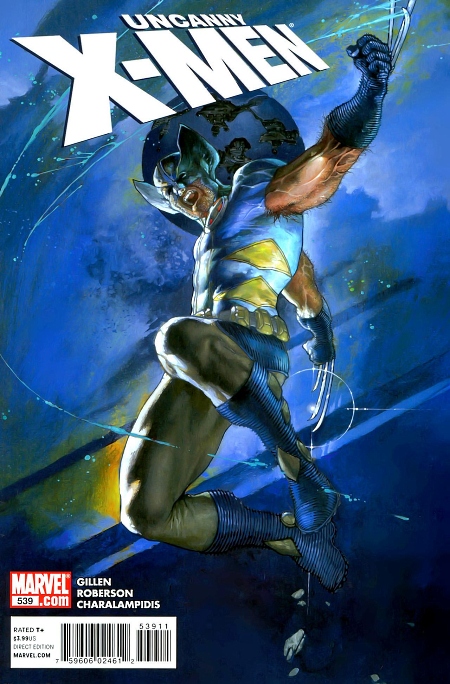 Hope is a special young lady. Saddled with a destiny that will either save the world or destroy it, depending on who you ask anyway, she indirectly leads a team of the first new mutants since M-Day. Continually a target, Hope has found marginal refuge on the island of Utopia with the rest of the X-Men.

Hope Summers was the first child born with an active X-Gene after Scarlet Witch wished away most of mutantkind. Taken into the future and safeguarded by her surrogate father, Cable, Hope dodged Bishop for years before finally returning to the present as a teenager. Hope has been called the mutant messiah, but time will tell whether she becomes more of an anti-Christ.

Hope sits in her room on Utopia and cleans her guns. It isn’t before long that she’s interrupted by her friends, Laurie and Idie, who try and convince her to leave the island and go window shopping with them. Before leaving they have a run-in with Wolverine who had been training with Teon on the beach. Continuing to give her a frosty vibe, Hope tells him it was nice to see him too before leaving for the mainland. Later, while in a clothing store, the girls are literally blind-sided by a flashbang. Hope is knocked unconscious, thrown into a van and kidnapped. Laurie flies off back to Utopia to get help, and finds it in Wolverine who agrees to rescue her. Wolverine tracks her down and helps her escape, but they are pursued by Hope’s captors. Logan’s jeep is blown-up with an RPG while the explosion sears away much of the furry Canadian’s hair and skin. Hope moves him to a safe location and takes on her pursuers herself, but is quickly beaten down. Meanwhile, Wolverine heals himself and together they fend off their attackers and head home, but not before Wolverine reveals why he’s been so frosty towards Hope since her arrival. Wolverine tells her, with all the hopes and worries attached to her existence, combined with what Cyclops and Emma know, that he hates the idea of having to walk down the same path he did before with Jean.

Spiraling out of the Breakworld story arc, this one-off issue before the Fear Itself tie-in begins tells a fairly straight forward story focusing on the shaky relationship between Hope and Wolverine. The issue feels short, however the big revelation at the end compensates the shortness because it’s the big plot point of their relationship. To find out for certain that Wolverine is growing tired of having to kill his friends because he has to, when faced with the prospect of having to do it once more, Gillen writes the character in such a way that we’re almost sympathetic to him. I feel this is especially the case if you’re familiar with Grant Morrison’s New X-Men or the subsequent Phoenix related stories, War Song and End Song. Although the issue was simplistic, it highlights the complicated, interwoven narrative the X-Men find themselves in. With a future uncertain, the issue emphasizes that despite their lack of communication thus far, Hope and Wolverine bond over a common principle: if people’s worst fears are true regarding her, Hope must be killed definitively. It’s a very simply written issue, but one that conveys a dramatic plot-point moving forward into the Fear Itself arc and Schism.

The pencils and colouring work in the issue were nicely done. I quite enjoy Roberson’s work and this issue wasn’t an exception, while the issue was beautifully painted as well. Every page from the beach scenes early in the issue, as the waves crash onto the shore, to the varying features on the faces of characters like Wolverine and Hope are done very nicely. The art is altogether colourfully welcoming to the eye. This is only a gleam into the totality of the artwork though. Throughout the issue there are great transitions between panels, notably the page where Hope and her friends have been flash-banged inside the clothing store. The top panel is coloured purple and white to mimic the flash grenade’s effects, while subsequent panels show Hope being grabbed from two angles, her being knocked out from in front of her and then her being dragged into a van. The team comes through again later in the issue after Wolverine is burned handsomely. In four horizontal panels Hope drags him on the ground, finds a thicket behind her, the scene twirls around to view the same thicket from her perspective, and then culminates with her throwing Wolverine into the bush. These are but examples, as there isn’t a piece of artwork in this issue that isn’t worth looking at.

I enjoyed the issue. I feel like it delivered in its purpose of bringing Hope and Wolverine together on to common ground and established not only a tenuous comradeship going forward, but also a mutual understanding highlighting the general theme that they are to do what is necessary when the situation calls for it. Altogether I felt like the issue delivered in this respect, despite its overall feeling of being short. Combined with the artwork, the issue was a great read and was altogether appealing in its presentation.