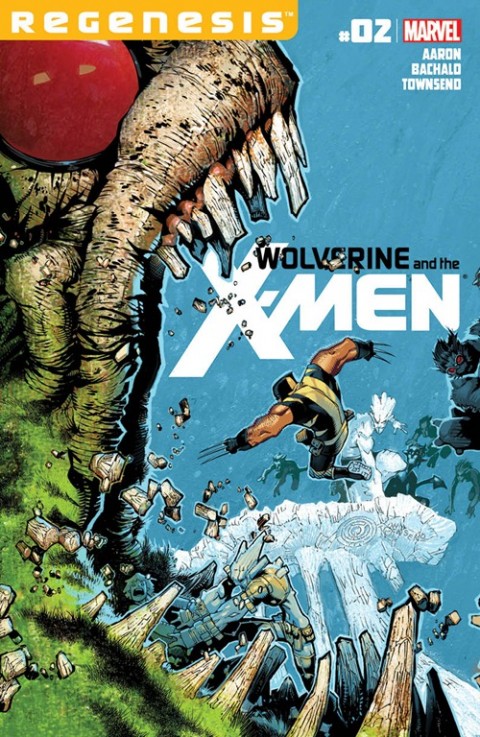 With the X-Men split into two camps, Cyclops and Wolverine lead two very different teams of X-Men headquartered in San Francisco and Westchester respectively. With the latter believing the younger X-Men shouldn’t be thrown into the heat of battle to protect mutantkind, Wolverine reopens the Professor Xavier’s school and dedicates it to Jean Grey. They have little time to settle in though as Kade Kilgore and his new Hellfire Club attack the school to continue their mission to profit off the world’s hatred for mutantkind.

Two weeks prior to the Kilgore attack, we find Bobby and Logan standing on the grounds of the as yet to rebuilt mansion, where Logan asks Bobby to more than he ever has before. Present day, we find Bobby fully transformed into Iceman as he attempts to take down Kilgore’s latest creations as a part of a collective attempt to save the school from further destruction. While many have been left unconscious, Wolverine asks Rachel Grey to get into the minds of every staff member and student and wake them up. While Kilgore and his friends watch from afar, the second phase of their attack begins as the members from the board of education begin to transform into monstrous fiends to add to Wolverine’s troubles. That is but a distraction, as the new Hellfire Club launch mortars which open to reveal entire platoons of miniature, genetically-engineered combat troops that grow upon contact with air. As the soldiers open their attack by using flamethrowers to scorch the earth, buildings and possibly students, Wolverine’s team joins the fray to fend off the Hellfire Club’s troops. Strangely it’s Iceman who helps them gain the upper-hand once he transcends popular conceptions of him and becomes something “more” in Wolverine’s words. Creating a regiment of Icemen, Bobby successfully helps the X-Men fend off their attackers much to the distress of the Hellfire Club. Although upset at the latest development, they regain their composure and unleash Krakoa on Wolverine and his X-Men.

Unlike the previous issue of of this book, I feel like it at least worked towards pushing the story forward. With the issue centered around Iceman, the tone of the story switched a little bit from the previous issue and was at least entertaining. I still can’t get into Aaron’s seemingly kid-friendly Wolverine story and it feels like there’s very little substantial story here to maintain a solid hold on readers’ attentions. Although a fun book, the plot feels awkward with Wolverine as headmaster of the school, while very much of the plot feels thrown together for the sake of compiling a blockbuster story. The end result though feels bloated without any resemblance of literary nutritional value.

Bachalo returns in the second issue of Wolverine and the X-Men, and with him is his trademarked, love it or hate it cartoonish art style. I personally dislike his work, which upon second thought may have more do with his colours than the work itself. Although his pencil work is odd and misshapen, his dull colouring doesn’t do the artwork any favours in improving its presentation on the page. In fact, the most vibrant aspects of the  pages are Steen’s letter-art lettering work, which is much more complicated than you would think.  Bachalo’s very unrealistic characters take quite a bit away from the book as a whole, and although Aaron’s story is hardly compelling, a book can often be saved by fantastic artwork. This unfortunately isn’t one of those situations. As with the first issue, Bachalo’s strong points are his tremendous landscapes, monstrous creations, and to his credit, changing the colouring tone of the pages featuring Bobby and Logan’s conversation two weeks prior to the Kilgore attack. I thought his Krakoa page looked fantastic, as did his rendering of Quintin Quire sitting in a lazy-boy chair holding a soft drink. There are aspects of Bachalo’s work I do like, the army of Icemen as another example, but it’s not enough unfortunately to make up for the rest of the book.

Although better than the previous issue, Wolverine and the X-Men #2 still doesn’t succeed in hooking my interest any more than its predecessor. Much of the plot feels cobbled together, using many of the X-Men’s classic threats to hurl Wolverine and his team into a sense of urgency as they try to reopen their fabled school of higher learning. Aaron excels at Wolverine stories, and while this at its heart is one, I feel like he’s ill-equipped at this point to tell a broader X-Men story beyond that of everyone’s favourite canucklehead. Wolverine and the X-Men is a good, kid-friendly book, but is one where the central character is used completely out of context and beyond its element. The end result is a hokey story that aspires to be something it can’t be.