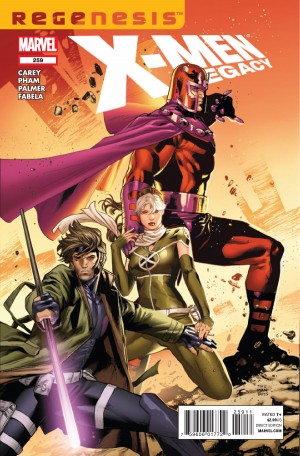 Continuing the Regenesis saga in the aftermath of Schism, the latest issue of Mike Carey’s X-Men title was released alongside the flagship title last week. Again following the movements of Rogue, Gambit and Magneto, we now follow them after their escapades in space as part of the team prepares to travel eastward to Westchester.

In the aftermath of Schism, the X-Men are left split in two camps: one follows Cyclops and has remained on Utopia, while the other has followed Wolverine back to Westchester where they intend to reopen the institution that Professor Xavier built. Rogue is undecided as to what she will do.

Facing the immensity the decision facing her friends, Rogue sits alone in Utopia’s coliseum as Gambit slowly approaches her for a chat. After discussing their options, Gambit suggests she not think about the future and what may happen if the X-Men split. Rather, she should follow her heart and decide where she wants to be at that very moment.  As they continue their conversation, Havok and Cyclops reunite, but immediately get down to business with the former asking his older brother whether there was any chance Scott and Logan could find middle-ground between their visions of the world. He believes many X-Men have strong feelings about one vision versus the other, leaving but a few on the fence, such as Rogue. Leaving Gambit behind in the coliseum, Rogue meets up with Magneto who had been sitting alone contemplating recent events. Seeking guidance, he explains to Rogue why he’s chosen to remain on Utopia, seeing Scott as an equal to himself. After a time, Magneto requests Rogue to touch his skin to gain some clarity of the situation, but what she gets is a small piece of another mutant’s lifeforce. The X-Men converge within Utopia’s stronghold walls and discuss the matter, resolving to test each of the returned mutants from space after discovering an eighth lifeforce attached to them. They discover Korvus’ sword to be a gateway to another realm, but are unsure of how to access it until the team decides to funnel the smaller pieces of the mutant’s essence into Rogue, who then uses the sword to open a gateway to the other realm where they find a long lost mutant: Ariel.

This is an interesting start to the final arc of Carey’s run on Legacy. Having returned to Utopia, we find the “X-Jammers” thrust right into the middle of the Schism debate. Despite their inclusion in the story, much like past Legacy casts, the book finds them organically included into the story which for the last 30-plus issues has revolved around Rogue. At the core this is still her story, and perhaps with the book’s direction and inclusion of the “X-Jammers,” this may be the best ensemble cast the book has seen where Rogue is the fixture character. With Carey leaving the title, this is his last hurrah and despite noted ups-and-downs, as a long-term series this has been the most solid X-title for the last several years. This story was well put together, adding a layer of intrigue once the characters begin theorizing about the mutant’s identity (Jean Grey?). For a moment, you believe it, and that’s a testament to Carey’s writing. This was an interesting first issue of the arc, and I would say Carey is nicely primed to go out with a bang.

Pham and Fabela put some fairly nice work together in this issue. I enjoyed the collage page featuring snapshots of the X-Men’s recent battles against threats ranging from Mr. Sinister to Bastion. They also created some beautifully touching scenes, such as Magneto and Rogue’s scenes on Utopia’s mountainous coastline. However I dislike how Pham portrays his male and female characters. Dependent on the gender, the characters have uniformed facial features in that all of the male characters have similar features, as do the female characters. There’s little variation in them in their arguably lazy composition. They deserve acknowledgement though for their great work on the final few pages as Rogue enters the other dimension through Korvus’ blade. The pencils were great, as was Fabela’s colouring as the issue came to a close.

While the artwork was good for the most part, the writing was strong as it has been throughout Mike Carey’s acclaimed run on the title. This final arc of his places the stamp on his run and should nicely reflect the absolute strength of his tenure and the duration of high quality the book has offered. This issue particularly sets up the final story of Carey’s opus, which for the last 30 or so issues has centered on Rogue. This final chapter finds her searching for a reason to make a decision to either leave or stay on Utopia, which I believe we’ll discover as the arc moves forward. The book also returns Ariel, last seen during Second Coming, to the X-Men fold. The impact of her return or the importance of it for that matter are yet to be seen, but considering Carey has scarcely stumbled throughout his run, I suspect he’s cooked up one final gem to christen his departure.