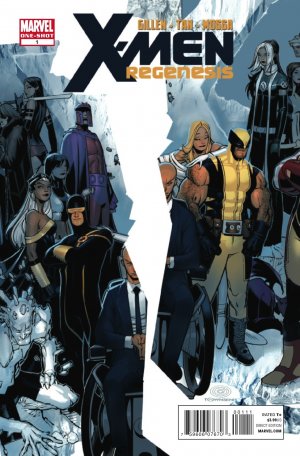 Covers: Chris Bachalo and Tim Townsend (A); Morry Hollowell (B)

Schism is over and the X-Men are left fractured. The only question left is, who stays on Utopia and who moves back to New York to help rebuild the mansion and the school with Wolverine? Alliances were redrawn with the release of this issue last week, so let’s take a look.

Upon the backs of philosophical differences between Cyclops and Wolverine, the X-Men are divided. One side believes children should not be exposed to the rigours of war. The other asks if mutantkind is to survive to see the future, can they afford not to involve the children? With mutantkind at its most precarious, the X-Men decide to go their separate ways and follow what they believe.

In the aftermath of Wolverine and Cyclops’ brawl, both of them make their cases to the other mutants on whether to stay on Utopia or to leave. One by one they visit their friends and companions, asking each to make a choice, while some such as Rogue, Magneto, Cannonball and Moonstar come to decisions through their own discourses. One by one they approach the likes of Gambit, Storm, Ice Man, Namor, Emma Frost, Psylocke, Havok and Polaris and request their help, while Rogue, Magneto, Moonstar and Cannonball make their decisions upon talking to and saying goodbye to their friends. The two sides part with the grand question of whether they part or not with hurt feelings looming overhead.

With Schism completed, Regenesis worked as an effective “kicking off” of the new X-Men status quo. I liked the pacing of the issue, as focusing on the key players on each team with individual, personal meetings was the most logical and sensible way of tackling the question of how to address the decisions made by each character on Utopia. That added an element of personalization to the story, defining who some of the characters are, such as Ice Man, or what they bring to the table as characters to their given teams, such as with Beast and Storm respectively. Conversations such as the one between Rogue and Magneto provide a final nod to their social relationships while also effectively breaking them apart physically. In this example I felt like Rogue and Magneto’s was nicely executed. From there, most other characters were given single panels, ranging from Namor to Rachel Summers, and Gambit through to Danger, where a single word bubble encapsulates their decisions sans a page’s worth of dialogue and build-up. The book is more so a snapshot of conversations rather than the cohesive telling of a story, and I suppose this is a case where it’s required. In this respect I feel the book was successful in ushering the new X-Men landscape into being, keeping it from being a clunky mass of messy plot points.

The artwork for the most part at least in its gleamed presentation is very straightforward, focusing very much on the individual conversations the characters have with one another. Despite this, Tan’s greatest achievement in this issue is his execution of the campfire, alpha-male dynamic depicted in scenes featuring Wolverine and Cyclops and the mutants who have chosen to side with them respectively. Each “campfire scene” accompanies a decision made by a mutant, often with the person whose ranks have been bolstered having the upper hand. In these scenes we see Wolverine gaining the advantage once Beast joins him, completed by an adjoining panel of Wolverine striking Cyclops with his clawed hand. Similar artwork is presented once Wolverine recruits Polaris and Havok; given Havok is Cyclops’ brother, the artwork again complements this scene by depicting the savage Wolverine ripping into Cyclops’ jugular, a metaphor in this respect considering their familial ties.

The best examples, though, feature Storm and Emma Frost, where in both cases it seems momentarily both will leave Utopia for Westchester, scenes which are accompanied by Cyclops being beaten down, ultimately contrasted with their choosing to stay on Utopia. The Emma Frost scenes were the most intuitive though. In between horizontally situated scenes of Cyclops and Emma’s conversation are two horizontal panels of the campfire fight. In one panel, the presentation organically follows Emma’s commentary on Scott’s presumption that she would stay on Utopia, complemented in the campfire panel by Scott turning his head towards her as Wolverine leaps at him from his other side. After the actual continuation of their conversation, the second campfire panel shows Scott again on the ground with Wolverine standing over him; again metaphorically representing the impact of a possible defection, especially in this case where he’s literally and figuratively blind-sided. Additionally, the tenderer scenes with Emma helping Scott back to his feet, teeth missing, and then moving to his side were nice contrasts which Tan executed perfectly.

The book was a good jumping-on point as we move into the next phase of X-Men stories. It allowed for those perhaps just coming into this world post-Schism to grasp the division between the mutant ranks, while emphasizing the details of these decisions for those who have a clearer idea of the X-Men’s roots, its present, and what they believe is necessary if they are to move forward into the future. Although the team makeups were known beforehand, here we discover how the teams were broken down and chosen through separate conversations with varying mutants, complemented by a primitive, campfire fight between the principal alpha-males. This is a very interesting time for the X-Men universe and its fans, mostly because of the dichotomy created between Cyclops and Wolverine  and the defection of many of Cyclops’ classic friends and allies to Wolverine’s side. Interestingly, the last bit of dialogue in the issue sums up the realities of Cyclops’ vision; despite his view very much being rooted in realism, his idealistic foundation still overshadows it combined with his yearning for mutant unity. This issue successfully functioned dually as a bookend to Schism, and a prologue to what’s to come.