Right now comic fans are descending upon the San Diego Comic Con. By all accounts, the industry is doing very well. Year-to-date orders by Direct Market shops in North America are up 18%. This time last year, sales were down 8% year-over-year. Away from books, fans are being bombarded with awesome movies, animated series, and television series. Marvel’s Avengers movie is a blockbuster, the rebooted Spider-Man has done well, and soon The Dark Knight will rise.

During the second quarter, most key historical Marvel issues continued to appreciate in value. Our Marvel Composite Index, which combines our Silver, Bronze, and Modern indices, gained 7.6% during the first six months of 2012. The Modern Age has been by far the best performing Age, rising 32.7% year-to-date. The Silver Age has been no slouch, logging a respective 9.6% gain. High grade Bronze Age titles continue to struggle, down 10.9% for the year. Looks like I was a tad premature in calling for a bottom!

Here’s a comparison of the Silver Age, Bronze Age, and Modern Age performance year-to-date. All indices have been set to a starting value of $100 for a direct comparison. 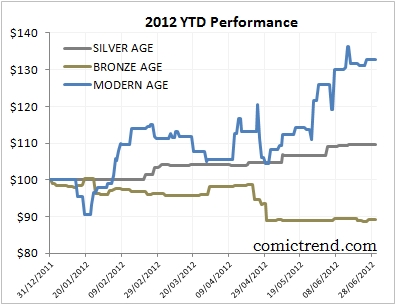 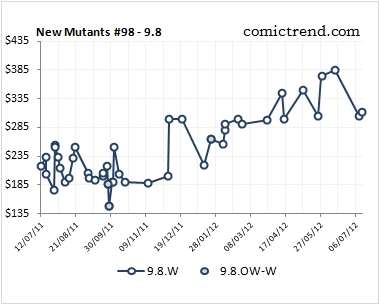 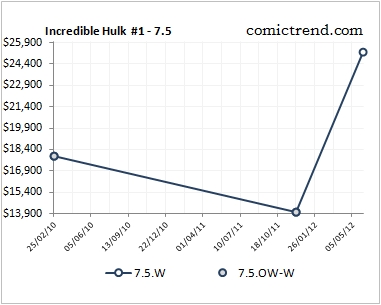 The usual suspects keep dragging down our Bronze Age Index. Giant-Size X-Men #1 9.8 continues its free fall with an auction finishing at approximately $4,000 in April. Incredible Hulk #181 9.8 is still struggling, down 67% from its 2009 high. Perhaps it will break $8,000 soon! 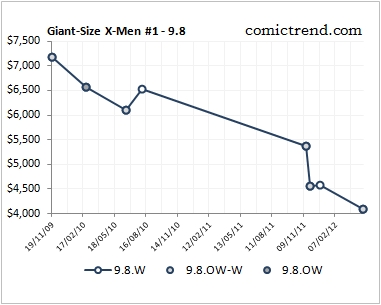 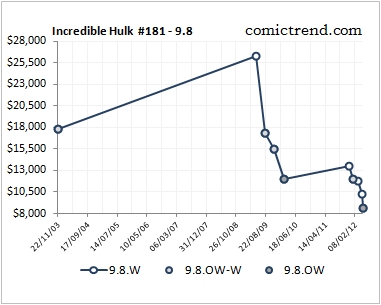 RJ Steinhoff is a lifelong comic book fan and when he’s not working for a living he runs the comictrend.com website.
Articles: 23