Eat This Not That is a popular column in Men’s Health magazine. The authors of the column compare two menu items found in popular restaurants and highlight the nutritionally superior alternative. Now, when I say “nutritionally superior” it’s with a sarcastic tone as usually neither alternative could be considered healthy (for example, the latest installment compared Burger King and Hardee’s  breakfast sausage sandwiches).

So I thought hey, why not do the same for comics? However, unlike with food we can’t count calories or carbohydrates to come up with easy answers. The purpose here is really to highlight some interesting comparisons rather than identify which comic is superior. After all, beauty and collectability are in the eye of the beholder. To keep things simple, the comparisons I’ve put together are between two titles with the same grade. The values used are comictrend.com values which are calculated as the median of the last eight transactions recorded on auction sites such as eBay, Heritage, Comiclink, etc. 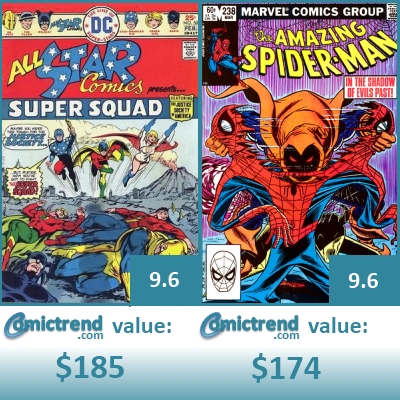 This is a battle of two first appearances: Power Girl vs. Hobgoblin. Both of these characters have messy histories. Power Girl’s origins have changed several times and many different people have assumed the Hobgoblin identity over the years.  Now, if I didn’t know what the covers looked like, I’d definitely choose All-Star Comics #58. Hobgoblin will always be a minor character in the Marvel Universe. Power Girl has a cult following and could easily play a part in future DC movies. But that #238 cover! The Romita Sr./Jr. cover easily ranks within the top 10 Spider-Man covers of all time. Hobgoblin may always be a minor character, but the amazing cover ensures this title will be always highly coveted. 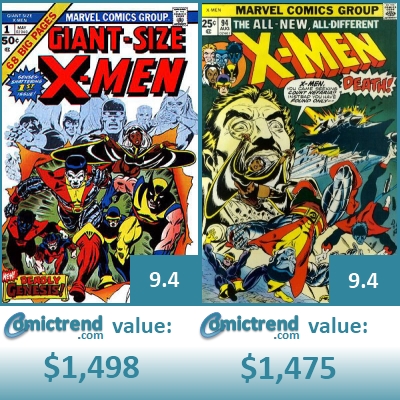 Talk about an impossible choice! Giant-Size X-Men kick-started the X-Men series after a five year absence. The added bonus is that it also features the second appearance of Wolverine. X-Men #94 was the launching point for Claremont’s remarkable 16 year run. Under his guidance, X-Men went on to become the industry’s biggest title. I prefer 94’s cover but I have to go with Giant-Size X-Men #1. 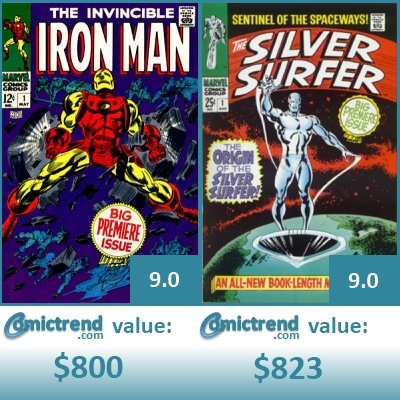 These titles are really only sought after because of the “#1” on their covers.  Silver Surfer debuted two years earlier in Fantastic Four #48 and Iron Man was first seen five years earlier in Tales of Suspense #39. Iron Man is by far the more popular—and important—character in the Marvel Universe. But I’m going to be a contrarian and pick Silver Surfer #1. What else can happen to boost Iron Man’s popularity? It could be argued that his popularity is as high as it is ever going to get. Plus, let’s look at the census: 195 Iron Man #1s are registered in the 9.0 grade. Only 135 Silver Surfer #1 9.0s are recorded.