Every collector of CGC graded comics is familiar with the information panel—typically referred to as the label—located at the top of each slabbed book. The most important part is of course the grade, ranging from 0.5 to 10. In addition to the grade, other details that could impact the value of the book such as spine tears, ripped pages, and inserts are also noted. Above the unique serial number assigned to each book is the page color. A book with white pages ranks at the top of the color scale. Below the white rank, books receive ratings of off-white to white, off-white, a mix of tan and cream colors, and then at the bottom are the extreme cases of dark tan or brittle pages. Brittle pages are typically found in early Golden Age titles that sat in someone’s garage for several decades before being unearthed.

While it’s clear that big page tears or missing pages detract from the value of the book, the impact to value due to page color is not as obvious. One would think that page colour does matter. Why highlight it on the label if it doesn’t? Clearly brittle or tan pages are extreme cases.  But what about the three most common non-white grades: off-white to white, off-white, and cream to off-white? How can we test this? 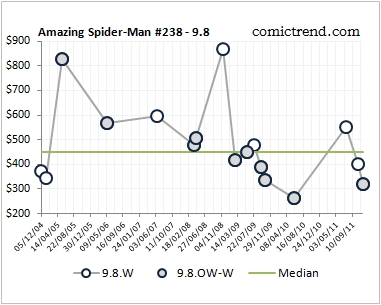 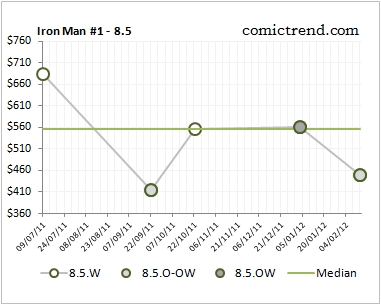 Iron Man #1. Verdict: A book with off-white pages sold for the second highest price since 2011, above two books with better off-white to white pages. 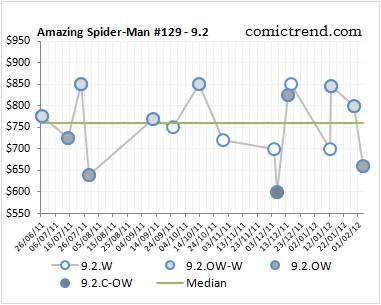 Amazing Spider-Man #129. Verdict: Four books with white pages fall below the median value. Three books with off-white to white pages received three of the four highest values. A book with Cream to off-white ranked the lowest. 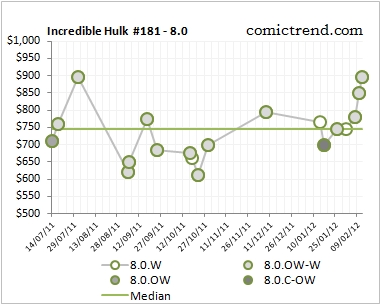 Incredible Hulk #181. Verdict: Books with white pages clearly did not receive the highest values. A book with cream to off-white fell below the median. 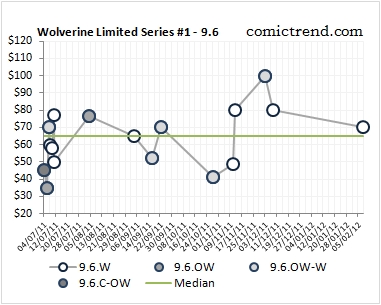 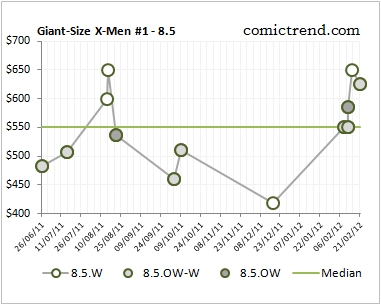 Giant-Size X-Men #1. Verdict: The books with the two highest values had white pages. But the book with the lowest value had white pages! Book with off-white and off-white-to white  sold for above the median value.

In four cases there was no evidence to conclude that white pages sell for higher values.

The charts have been visually inspected and the test statistics have been calculated. The balance of evidence says that page color does not matter. Clearly collectors are willing to value books with off-white to white, off-white, and cream to off-white pages just as highly as those with pristine white pages.

This data sample is small so any conclusions must be made knowing that a test involving hundreds, preferably thousands, of transactions could come to a different conclusion. Furthermore, given that in several cases the books with cream pages consistently ranked below the mean, further testing should be conducting zeroing in on this color. Unfortunately, the number of observations just isn’t there. I suspect that Modern Age books with high census numbers will be more sensitive to page colour. If there is an abundant supply of white page books then those with off-white pages will definitely be sold at a discounted price.

Next time you’re wondering whether or not to pull the trigger on a book with off-white to white or off-white pages, bear in mind this evidence. Bid knowing that the value of the book should not be materially impacted due to its less than white pages.