On Saturday, Marvel announced the sequel to their smash-hit Avengers will be titled Avengers: Age of Ultron. Plot details remain scarce. Who created Ultron in the Marvel cinematic universe? Will Hank Pym be in the movie? Will we see Vision?

What’s interesting about Marvel’s Age of Ultron announcement is that the comic storyline it’s titled after was released just this year. Unlike Sony’s Spider-Man movies or Fox’s upcoming Days of Future Past X-Men movie, which go back to the Gold, Silver and Bronze ages for their plot points, Marvel seems keen to draw inspiration from more modern comic events and even the Ultimate Universe (as we saw with the Avengers). For comic collectors, Marvel’s decision to draw from modern takes on its stable of superheroes creates a great opportunity to build a collection that spans decades of comics produced by some great writers and artists. 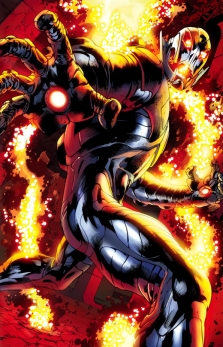 In Avengers #57, in his first attempt to destroy Pym, Ultron creates Vision. Without going into the bizarre and confusing details, Vision was just part of a grand plan to get the Scarlet Witch into a romantic relationship with someone who she couldn’t have children with as the Scarlet Witch’s offspring would be so powerful they would threaten the existence of the entire Marvel Universe. But the two end up having children anyway (yup, Scarlet Witch’s powers know no bounds!). As it turns out, the children are just chunks of Mephisto’s soul and are later re-absorbed. Cue Scarlet Witch insanity and the end of a marriage!

Ultron would resurface from time to time after his fist appearance. He’s been destroyed at least a dozen times despite his numerous technological upgrades. In Avengers #66 he incorporates an indestructible alloy called adamantium into his design. This issue marks the first time adamantium is referenced in the Marvel Universe. In Avengers: West Coast #90, Ultron-15 creates a mate called Alkhema. In Mighty Avengers #1-6 the Avengers face off against Ultron yet again. This time, Ultron has hijacked Tony Stark’s body and transforms it into a metallic duplicate of Wasp!

I won’t detail the recent Age of Ultron story for those aiming to stay clear of spoilers.

So we have a nice list of titles to collect! In summary:

Please let me know if I’ve missed anything!