This week I want to examine how the census numbers influence the market values between the 9.0 – 9.8 grades (i.e., the “mint” grades). Immediately we’re confronted with three problems. The first is a lack of data. To really make any statistically significant conclusions more data is needed. For example, for Incredible Hulk #181 I only have six transactions recorded. One of the transactions is from 2003. Another is from early 2009—right before the bubble popped. The second problem is that the data is constantly changing; the census data is fluctuating with new additions and market values have gone nowhere but down. Lastly, there is no agreed upon definition of market value. Here I define market value as the median of the last eight transactions. For grades where I cannot find eight transactions (such as Incredible Hulk #181 9.8 where I have just six) I use the outstanding data combined with my own judgement.

How does the census data look for a typical title? Below are charts that present the census data and market values for Amazing Spider-Man #300 and New Mutants #98. On the primary y-axis is the census number for each grade. As expected, the 9.8 grade for Amazing Spider-Man #300 has the lowest count. The highest count belongs to the 9.6 grade. For New Mutants #98 the census data is completely different. There are almost just as many 9.8 slabs as there are 9.6 slabs. The decline in the census is quite steep below the 9.6 grade. However, we can’t say there are really fewer 9.4 issues than 9.6 issues as there are obviously more of these lower grade issues “out there” in the world for both titles. It’s just that they remain ungraded as the cost of CGC grading and the potential return from a higher grade slab motivates the submission of near mint/near mint+ titles.  This is especially true for New Mutants #98—a 9.8 copy only goes for around $200. Plotting all the indexed market values of all the titles in the group we get the following chart: Using this data, a general model can be created. For the Modern Age titles, where the number of titles across the grades is very high—and potential supply from ungraded issues is a real threat to graded supply—prices do not fall as steeply as the tightly supplied Bronze Age and Silver Age titles. For example, one of the steepest declines occurs with Incredible Hulk #181. For this title, the number of 9.8 issues in the census represents just 4% of the total 9.0+ supply. Secret Wars #8 resides above the median with 47% of the 9.0+ supply represented by the 9.8 grade. Pricing tends to be much flatter for titles where the 9.8 grade represents more than 20% of the total 9.0+ supply.  In fact, all the titles below the median have less than 20% of the total 9.0+ supply allocated to the 9.8 grade. 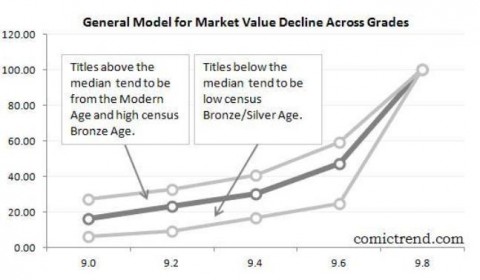 For the independent census variable, I’ve created what I call the “census factor,” defined as the lower grade census/higher grade census. Next I’ve created a “price factor” which is the higher grade market value/lower grade market value. The chart below presents the relationships between the 9.8-9.6 grades, 9.6-9.4 grades, 9.4-9.2 grades, and the 9.2-9.0 grades. Immediately we can clearly see there is a positive relationship between market value and census data between the 9.8-9.6 grades. The R2 is a strong 64%, which means the census data accounts for 64% of the market value bump between the 9.8 and 9.6 grades (even higher at 70% for just the Bronze/Silver Age titles). Although we have limited data, it’s safe to say that we can conclude the census data plays a big part in explaining the price difference between the two grades. This confirms the generally accepted view, and it’s great we finally have some data to back it up! 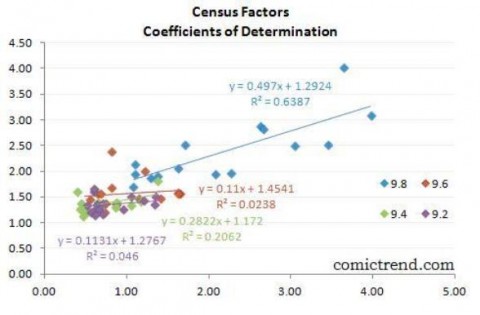 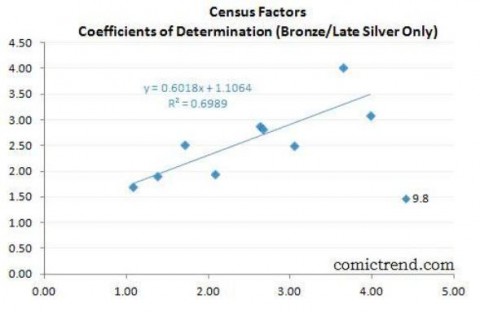 The next conclusion from the chart is perhaps a bit more unexpected: the census data has VERY LITTLE to do with the market value differences between the grades! In fact, the census data is basically irrelevant! It’s best to just follow the general model developed above to model the price differences between the grades. It appears the collecting community establishes the 9.8 market value based on the census data (by comparing it to the 9.6 census and the outstanding census data for all the 9.0+ grades) and then just slashes the market values below the 9.8 grade according to the general model: 9.6 value = approx 50% of the 9.8 value, 9.4 = 30% of the 9.8 value, 9.2 = 24% of the 9.8 value, and 9.0 = 16% of the 9.8 value. Then an adjustment is made for the total supply (high for Modern Age, low for Bronze/Silver). Of course there are many other variables at play including the popularity of the book, historical significance of the book, and other factors that influence collector demand. That being said, this model is a great starting point for understanding the market dynamic.

The equation next to the linear trend lines shows the parameter vector and error term. So if you ever find yourself bargaining for a 9.8 title on eBay or at your local comic shop, all you have to do is find the 9.6 census data, multiply it by 0.50, add 1.29, then multiply this number against the market value of the 9.6 grade to arrive at the theoretical value of the 9.8 grade! See, comic collecting is easy!

OK, so you’ll never do that. But hopefully this quick look into census data and market values helps you understand the relationship between them a bit better.