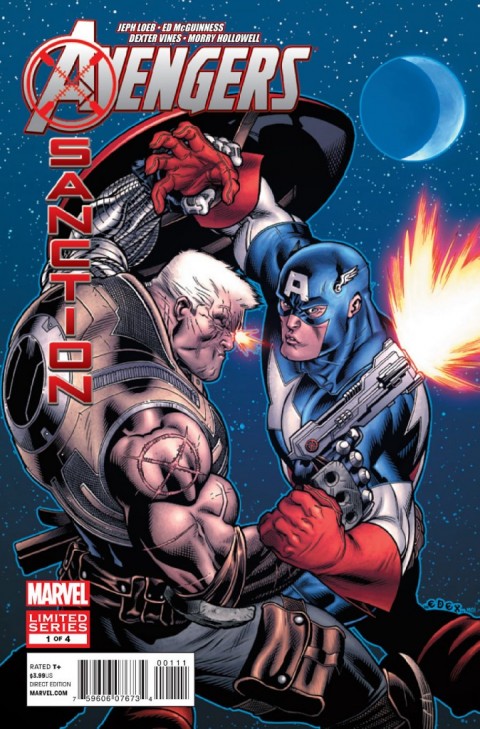 Earlier this year the comic book world first caught wind of Cable’s imminent return to the Marvel universe. The only question that remained, was, how? With Cable’s death in Second Coming, it appeared that he had completed his final mission, but it would seem that for the time-travelling hero from the future, one final mission remains.

When a young mutant was born in the harsh cold of the Alaskan climate, armed with the knowledge of things to come, Cable charged himself with protecting the young mutant even if it meant sacrificing himself to do it. After adopting her as his daughter and naming her Hope, Cable travelled through time protecting her at every turn. Upon returning to the present, Cable and Hope found themselves embroiled in a battle between Bastion and the rest of the X-Men. Ultimately Cable gave his life for his daughter and appeared dead to the world, but it would appear more is at play than any have realized.

As the Avengers swiftly move through New York City’s meat-packing district, a shrouded man watches closely as his targets move further into his sights. With Cap and company’s attentions directed towards their targets, Falcon is shot down abruptly; he lands with a thud in an NYC alley. Seeking help, the cloaked figure punches him into unconsciousness and drags him towards a sewer entrance and takes Falcon underground. After a brief recount of the moments after his “death,” we quickly find Steve Rogers in pursuit of Cable, using Falcon’s bird, Redwing, to track him. Upon arriving in the warehouse, Rogers is taken by surprise by Cable who holds his large pistol to Cap’s head. A fight breaks out between the two, each using their weapons and surroundings to their advantage, but it’s Cable who eventually comes out ahead, leaving Captain America unconscious. Another brief flashback later, we discover that the Avengers somehow affect Hope’s future, and Cable has charged himself with ensuring Hope lives to reach her destiny. A mission he intends to complete even if it means putting down each Avenger in his way.

After months of build up, Cable Reborn, as it was tentatively titled upon announcement, was released last week and is the first issue to help kick off Marvel’s huge company crossover set for 2012 featuring the X-Men versus the Avengers. Written by Jeph Loeb, Avengers X-Sanction re-introduces Cable to the Marvel universe for one final mission (for now anyway). Continuing his story from his perceived death in Second Coming, we find Cable having returned to the present with the intent of picking off each of the Avengers one-by-one, with each believed a legitimate threat to Hope’s destiny of saving mutantkind. Loeb’s storytelling adopts two tones. Foremost we are introduced once more to the unbridled, uncompromising soldier/warrior that Cable is. Loeb correctly articulated the importance of “the mission” to such a character such that they appear cold and callous. Comparatively, we also see glimpses of the tired, worn down father figure who fought long and hard to protect Hope, a young mutant girl whom he considers his surrogate daughter. The two dynamics of the character are melded together to combine the best parts of Duane Swierczynski’s Cable series and the classic depictions of Cable throughout the 1990s. In this respect I really think Loeb did a fantastic job of marrying those two aspects of the character and presenting them in a way where Cable’s lone-wolf, mercenary mentality shines through in how he, without reservation, takes down both Steve Rogers and the Falcon if it means protecting Hope. It’s difficult to perceive the trajectory of the story other than the inevitable conclusion, but what’s clear is that if this is actually Cable’s final mission (…), it could be his biggest story yet.

Ed McGuinness came ready to fire on all cylinders in this opening issue to the X-Men-Avengers salvo that will envelope the Marvel Universe in 2012. The opening introductions of each Avengers team member amid the pouring rain as they attempt to apprehend evil doers on the New York City’s streets nicely set the stage for the booming sound of a sniper rifle’s gunfire as a shot rings out across the city streets; emanating high up atop a building several stories above the Avengers. There we find a rain-poncho clad Cable sitting comfortably with his .50-calibre rifle post-Falcon shooting. The description summarizes the first few pages of the book, which McGuinness expertly executes with ease. The landscape is nicely coloured by Morry Hollowell who’s work further constructs the atmosphere of the microcosm of the city’s landscape. McGuinness and Hollowell resume their work later in the issue once Cap and Cable’s “disagreement” becomes physical and the two throw down. Although strangely clunky and over muscular in the silhouette page, I thought the pages featuring Cap deflecting his shield off a support beaming and beaning Cable in the back of the head, their exchange of weapons with Cable using Cap’s shield and Cap using Cable’s gun, straight on through to their finale once Cable hurls the shield into a wall and blind sides Rogers as he tries to retrieve it. Although I must complain about the unrealistic, almost Liefeld sized proportions of Cable in some panels, I felt the artwork was a nice, action-packed, atmospheric companion to the story which helped tell pieces of Loeb’s plot which perhaps were otherwise lacking.

Upon hearing this title’s announcement, and being a fan of the “last Cable story,” I was hesitant to approve of this story especially with Loeb’s hit-and-miss tendencies and his avoidance of most continuity when writing anything. This story, however, nicely flows from Second Coming, however we’ve yet to see a complete explanation as to what happened to Cable, why he isn’t dead, and how he’s reverted back essentially to his previous form before he allowed the techno-organic virus to overwhelm his body. This is no small detail, and I feel it’s necessary to explain these plot points sooner rather than later. Otherwise I can’t help but look as this Cable story as being anything but “another cool story” that Loeb writes freed from continuity. I feel it’s very crucial with this limited series and the greater crossover going forward that this is explained, especially if Cable is to maintain a presence until at least through the duration of the Avengers vs. X-Men event. The issue itself, sans these gripes, was well done and I enjoyed the story Loeb is setting the stage for. I liked the pacing of the issue, and combined with McGuinness’ fantastic pencils, the book was an enjoyable read, one ripe with action, intensity and a strong story.