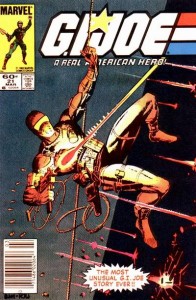 The 80s are a much maligned decade when it comes to collectible comics. Hardcore collecting and speculating ran rampant and accelerated throughout the whole decade culminating in the huge bubble burst of the early 1990s (did you get any foil on you?).

Hoarding of special issues and 1st issues became an art form and a very profitable business model both for the specialty shops supplying the speculators and the savvy speculators themselves riding the ponzi scheme wave that was the 1980s collectible comics scene.

What’s often misunderstood about comics from the 1980s is that a great number of books from this decade still carry a great deal of demand.

Slowly though the 80s have become a decade many current collectors cannot remember and certain issues have quietly been soaked into collections and have actually become relatively hard to find.

Go to conventions or drop by your local comic book shop and have a look for comics like our pick this week G.I. Joe #21. The odds are you will not find it. Amazing Spider-Man #252 is always missing too isn’t it, and Swamp Thing #21, and Batman #428 and a plethora of other issues that slowly over time have gone from being “everywhere” to being “nowhere”!

While the decade will never give us comics that sell for thousands of dollars (OK you got me on TMNT) it still holds plenty of books that will continue to enjoy high demand. Us old surly jaded hobby veterans should not count the 80s out!

G.I. Joe was a very successful Marvel title that lasted a full 155 issues running from 1982 to 1994. The run is actually highly collected. The G.I. Joe property is still going strong on many pop culture fronts, feature films (new one is due in 2012 with The Rock playing Roadblock) , toy lines, IDW comics and graphic novels are all delivering new G.I. Joe material to fans.

And what fans they are! G.I. Joe along with Transformers is a stalwart of 1980s nostalgia. Kids growing up with the cartoon, toys and Marvel comic books are just coming into the age of promotion and financial success (in a general demographic sense). Even Joe fans that are not into comics want to own special issue like #1, #21 and #155 (last issue in the run). 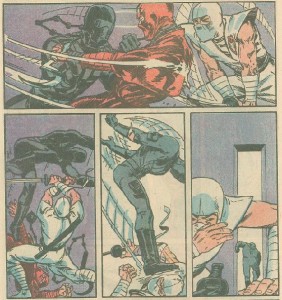 Well it is considered an 80s classic. Larry Hama’s “Silent Issue” unfolds with no dialogue, no word bubbles, no captions. Contrary to popular belief this did not come about because of printer error (a myth that spread through the fan base in the 80s was that someone screwed up and forgot all the words and text). Hama himself in interviews has stated his intent was to produce an experimental silent issue with no text. From what I’ve read Hama was behind schedule for this issue but had the no word idea brewing for a while, the fact that he was both drawing and writing and was late actually forced his hand.

This Larry Hama’s story is considered one of the finest by Joe enthusiasts. It’s a classic rescue mission storyline that seems to have been made for the innovative approach Hama took.

G.I. Joe #21 features the 1st appearance of Storm Shadow. Storm Shadow is a major Joe character and he first appeared as a member of Cobra but would later become a member of the Joe team and one of Snake Eye’s closest allies. The closing panels of the issue reveal a tantalizing connection between Snake Eyes and Storm Shadow.

As I’ve mentioned above there is an abundant supply of this issue in high grade. As of this post there are 241 in a grade of CGC 9.4 or better. About 50 copies are traded each year so the book is relatively active in the market.

I think the 9.4s are a the better store of value for this book, you can still find them for about $80 and that price has held steady for the past 2 years (something you can’t say for most books from this era). I actually recommend you hunt down a nice solid 9.4/9.6 raw, ungraded copy, put it in a very rigid acid free board and a nice mylite acid free bag, you may be able to hunt one down for below guide. On a book like G.I. Joe #21 I’d fight the impulse to then send it in for grading. Remember that it’s a nice copy of the book that you want not a nice graded copy, there’s a difference!. A book from this era should not need a CGC verification anyway especially in that 9.2 to 9.6 range. CGC cases are important for older books, verifying completeness; restoration etc, a book from the 80s like G.I. Joe #21 really does not need such expensive verification. A nice #21 is a nice #21.

Any comic collector worth his or her salt should have comics proudly representing the decade that was the 1980s. G.I. Joe #21 is very high on the list of 1980s must haves.