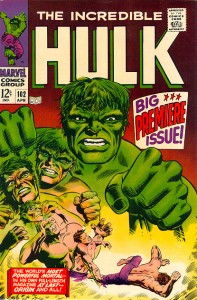 Marvel Now is getting a lot of press and rightly so. Any time a comic publisher attempts some sort of relaunch fans pay attention. Marvel  has had a few famous re-launches in its day, who can forget the Rob Liefeld inspired Heroes Reborn project of 1996/97. One if the company’s most successful re-launches came in the spring of 1968 when the House of Ideas turned its 3 monthly anthology titles into 6 character driven titles.

From Tales of Suspense we got Captain America and Iron Man, from Tales to Astonish we got Sub-Mariner and Hulk and from Strange Tales we got Dr. Strange and Nick Fury.

These 6 titles came out between April 1968 and June 1968, they are all now considered key comics. The Overstreet Price Guide treats all 6 of these comics as keys and the market has been strongly reinforcing this position for over 2 decades now.

This Spotlight argues that Incredible Hulk #102 is the relaunch book most undervalued by the current market.

Let’s have a quick look at the 6 comics.

The Hulk is no B list Sub-Mariner nor is he a supporting cast specialist Nick Fury, he’s the Hulk! This year’s price guide saw the Incredible Hulk #1’s value catch and tie that of Fantastic Four #1. This year saw Hulk steal the Avengers movie! The Hulk has always been near the top of the Marvel heap, so why the lack of respect from the market?

Is it perhaps because there are more Hulk #102s?  No. The CGC census shows the following population as of this post (for Universal, non restored blue labels):

Now let’s look at the current market for CGC 9.4 copies of each book;

Whoa! So there are as many Hulks as there are Captain Americas and yet the Hulks are trading at half the value?

Double Whoa! So there are way less Hulks than there are Iron Man #1s and yet Hulks are trading at 38% of the value?

Hulk came out of Tales to Astonish just as Sub-Mariner did. The Guide has the Hulk at only $5 more than Subby #1. How could this B lister Subby even come close to our jolly green A lister?

Perhaps it’s a #1 thing? Perhaps collectors and investors prefer #1s and penalize first issues that are not #1s? Are #1’s over valued just because they are #1s?

Detective Comics #27 and Amazing Fantasy #15 are not #1s and yet they are the second most valuable comic ever and the most valuable comic of the Silver Age respectively. So while #1’s may get special treatment random number books can still be worth a lot.

Cound it be just a number thing? If it is, it shouldn’t be. The way I see things Hulk #102 is a great comic that the market is not getting right at the moment.