Once upon a time I reviewed Marvel VS Capcom 3. This was relatively early on in my career as a columnist and I threw out the line that it was written by “hack” writer Frank Tieri. In return Frank told me to “be fruitful and multiply” with myself. Only not as euphemistically. My reaction was something along the lines of “wow, Frank Tieri reads my column!”.

Here is the thing though, I didn’t really mean that he was a hack. I kind of just threw that out there, the review was about the game, not about him. But one can’t just throw out words like that. What I actually meant would have been more along the lines of “I don’t think that Frank Tieri is a very good writer and I have disliked his runs on Iron Man and Wolverine”. That doesn’t really flow off the tongue though. The whole thing taught me a valuable lesson about being a bit more careful when I write.

So in some ways this review is my Nixon goes to China moment. But now my opinion of Frank Tieri has changed. And why? Two reasons: I listened to him being interviewed and I read Space Punisher.

Frank was a guest on Jimmy Palmiotti’s podcast and mentioned something which I will remember as long as I have the privilege of writing about comics. I am paraphrasing (I’m sure the exact quote had more swears) but it was something along the lines of “Dark Knight Returns and Watchmen are great comics but not every comic can be like that. Comics take themselves too seriously. Comics are also supposed to be fun.”

And just like that I “got” what he tries to do with his work. Frank is funny, but a mean funny. And he masterfully uses curse words like Michelangelo worked with paints. He wants comics to be fun, to be tongue in cheek, and to make people laugh. And if his comics were movies they would be a hard R.

Therefore, his ideas don’t really work well in the normal Marvel universe. But neither does the Punisher. So when he is given his own sandbox to play in to create, distort, and exaggerate he develops some amazing ideas such as why is there no space mafia in the Marvel U?

Thankfully he answers this question in Space Punisher. He also answers what would happen if the Punisher had a light sabre, or if the Brood were taken over by the Venom symbiote, or if the Punisher had a robot sidekick with gatling gun arms. Pressing questions that demanded an answer, and Frank gleefully provides answers. The story is ridiculous, but it is supposed to be, and it races along at a perfect breakneck pace. 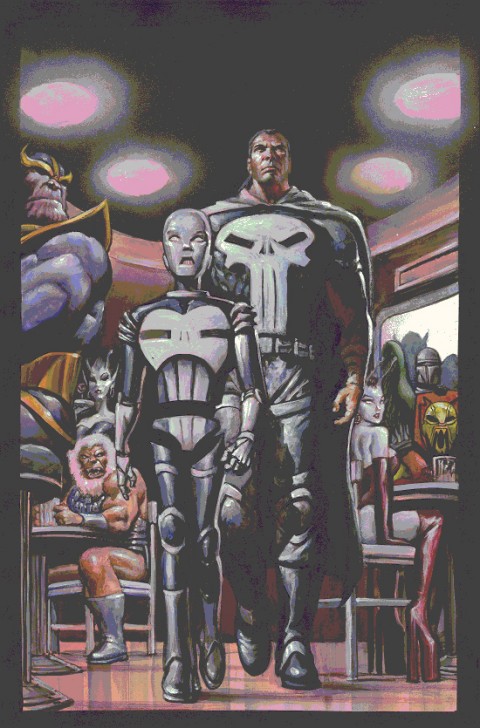 The painted art from Mark Texeira perfectly suits the story. Tex has done a brilliant job of envisioning spacey-versions of your favourite Marvel villains and the choice of paints give it a great pulp feel, reminiscent of the covers for 1960s sci-fi books.

When I finished the book I immediately wished I had issue two in front of me. And in many ways, isn’t that the point of comic books? Shouldn’t issue #1 make you want to buy issue #2?

I guess when it comes to books like Space Punisher you either get it or you don’t, but simply put you should all go out and buy Space Punisher. I want a sequel. And whenever his creator owned work Captain Brooklyn comes out (he is working with Jimmy Palmiotti and Amanda Conner) you should definitely buy that as well. You will not be disappointed, just don’t take it so seriously.