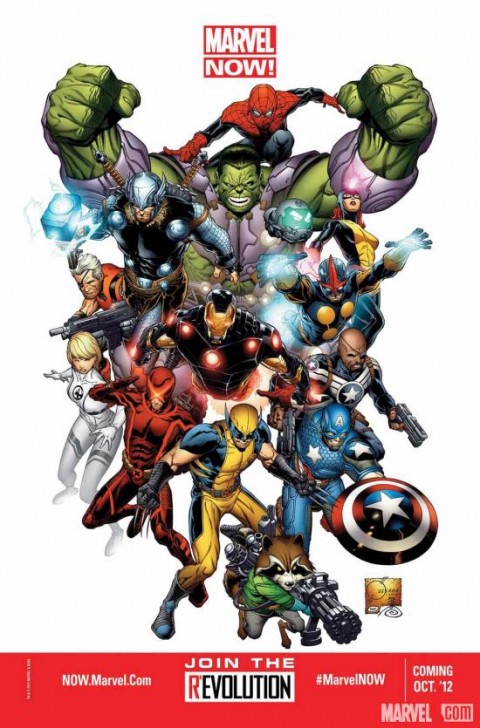 So the big announcement came down the pipe last week that Marvel is going to relaunch, not reboot all of their comic books starting this fall (gee… where have we heard that one before).  Essentially every title is going to be restarted at #1.  This will give a clear and defined jumping on point for new and “lapsed” readers to pick up a book and know where the story is going.

At first I was very skeptical when I heard this news.

I’m a fairly regular Marvel reader.  Captain America, Daredevil and Fantastic Four/FF are at the top of my pull list every month.  So having the Marvel Universe rebooted isn’t something I am excited for.  I’ve invested the last couple of years trying to read all I can about the characters I really like.  I even pick up the story crossover events, which leads me into different books I wouldn’t normally buy; for example Omega Effect which got me hooked on Greg Rucka’s Punisher and I enjoyed Avenging Spider-Man.

It didn’t sit well with me thinking that Marvel is turning it’s back on hardcore collectors, to try and entice new readers, or readers who’ve been away from the hobby for years.  Why is their money more important than mine?  I’ve been here forever, they’re just jumping on the bandwagon because they saw Avengers and think it’s “pretty cool”.

Marvel also announced that every book will have a new creative team.  The one that bothered me the most was the announcement that Jonathan Hickman was going to be leaving Fantastic Four for Avengers.  This ticked me off because I finally understood his writing style.  I finally get it that he writes in a large and sweeping scale that takes a couple of years to see where everything is going.  I really enjoy Fantastic Four and I wanted to see where he was going to go on from the Future Foundation.

Then the other announcement was that the X-Men and Avengers are going to team up into one team.  Great… now everybody’s and Avenger.  Since the Avengers are really popular will every book be an Avenger book?  Are they just trying to cash in on everything?

I wasn’t very happy with Marvel at that point.

Trying to keep an open mind I read the Marvel.com article that explained what is going to happen with Marvel Now.  Marvel CCO Joe Quesada, EiC Axel Alonzo and Sr VP Executive Editor Tom Brevoort were asked a bunch of questions and they explained what will happen from the end of 2012 until the beginning of 2013.

One of the announcements was that Rick Remender and John Cassaday will be the creators for Uncanny Avengers.  John Cassaday is the artist on the new Avengers/X-Men book.  Really?!?  That’s awesome!

Uncanny Avengers will be about the X-Men and Avengers teaming up to take on a resurrected Red Skull who has an army of genetically enhanced soldiers that he calls “S-Men”.  That’s even more awesome.

The new Bi-Monthly Avengers will be written by Jonathan Hickman and drawn by Jerome Opena and Steve Epting.  Marvel is winning me over so far.  Epting is one of my all-time favourite artists.  Tom Brevoort said in the article that Jonathan Hickman has the ideas plotted out already for Avengers up to issue #63.  With a the book coming out bi-monthly, that is almost two and a half years worth of stories.

Biran Michael Bendis will be writing All New X-Men which will feature the original X-Men, created by Stan Lee and Jack Kirby, coming to the future to see how much the world has changed.  That sounds like it may be an interesting story as well.

It looks like Marvel is pulling out all the stops.  “Changes to the character status quos, alter egos, costumes, creator shifts, design shifts” will be a very different Marvel.  They say they want to keep the history and legacy of the characters but essentially they will change.

Joe Quesada has stated that a lot of work will go into the covers to change them and make then new and innovative.  As long as they don’t repeat the 90’s and go back to die-cut covers and holograms, we should be good (and hopefully no Magic Eye.  I could never see the pictures with Magic Eye.)

There are many reasons for Marvel changing their focus with comic books.  DC may be the reason for the change.  DC saw huge success with the New 52.  The success of the Avengers has a lot to do with it as well.  There are many people out there who are fans of the comic characters, and it looks like Marvel will do anything it takes to get them into a comic shop to buy some comics.

So Marvel… alright you got me.  I’m hooked.  You’ve got some great talent working on some new story ideas.  It looks like obscure characters are going to be getting a push (hey Rocket Racoon is in the Marvel Now! poster.  Can you get any more obscure than that?)  It looks like the next 4 to 5 years will be very interesting over at Mighty Marvel, and Comic Book Daily will be here giving you our opinions on what’s happening.