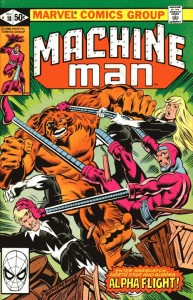 “Canada’s Premier super hero group protect their country against all enemies, foreign and domestic. They are strong. They are on guard. They are Alpha Flight“. So goes the Marvel website’s description of Alpha Flight!

Not known to many though is the fact that while Alpha Flight members Vindicator, Shaman and Snowbird were busy helping the X-Men beat Wendigo in X-Men #140 the other half of the team (Sasquatch, Aurora and Northstar) was busy taking on the much more formidable Madame Menace in Machine Man #18. This fact ties these 2 books together nicely and no true Alpha Flight fan should own an X-Men #140 without a Machine Man #18!

Machine Man #18 is an obscure little gem, it’s print run was a fraction of the massive X-Men print runs of the time. Looking at the CGC Census we can see just how neglected this book is;

Note that Alpha Flight #1, published late in 1983 and with only a $5 price guide value has almost 12 times the amount of copies graded compared to Machine Man #18. Notice also that the X-Men #140, the tie-in issue has almost 40 times as many copies graded.
Now consider the market performance for the above issues. CGC 9.6 copies on the market are getting the following;

Wow, Alpha Flight #1 is performing well and it’s performance should be an argument against those that would say it is the X-Men title that lends the value to the early Alpha Flight appearances. Clearly there are Alpha Flight fans out there. I think the issue here is awareness.

Machine Man (who 1st appeared in 2001: A Space Oddessy #8) is in itself a great little Copper Age run, it lasted 19 issues running from April 1978 to February 1981 and boasts Jack Kirby contributions for #1-9 and Steve Ditko contributions from #10-19. Issue #19 introduces the Jack o’Lantern who later became the 2nd Hobgoblin.