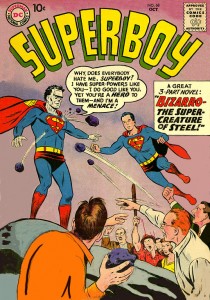 Superman turned 75 back in June and it got me thinking a bit about old Sups and his current situation.

Here’s the hero of heroes, the grand daddy of them all and yet we can’t seem to get him right for the 21st century. His movies seem to be constant re-boots trying in vain to find a right formula; his comics are underperforming relative to the Batman line, the JLA line and for a long stretch the Green Lantern line.

I for one would love to see a strong viable Superman, I for one don’t want to see Superman turn into a Mickey Mouse, a character long past relevancy but propped up by the corporation for symbolism and all that other stuff.

DC Comics has just launched Villains Month and in Superman #23.1 (also called Bizarro #1) we get Lex Luthor messing around with Superman’s DNA trying to create anti-Supermen so to speak. So Luthor is going to create a new Bizarro I gather.

The first thing I thought of was the old Bizarro of the Silver Age and I thought this would never work. Then I thought ‘wait a minute’ this is what we need. All the great heroes and villains need updating, the Joker of today certainly is not the Joker of 1963.

Yes a cool new approach to Bizarro if pulled off can only help the Man of Steel in his quest for more relevancy. Please don’t take the whole relevancy approach as a black and white issue. I know Superman is still a much loved character and I know he is still viable but surely you’ll agree more can be done with the character, something needs to change.

Anyway back to Bizarro, Bizaarro was a cool concept that was a victim of his times. These were that hay days of campy DC comics the 1950s and 1960s. The whole mirror image of Superman/ opposite of Superman concept needed more exploring perhaps in a more mature way. Perhaps he would make a great character in the next Superman film.

Something tells me a Bizarro done right could really work.

Perhaps it’s a good time to pick up a 1st appearance of Bizarro? I’m officially looking for one as of this moment.

Bizarro 1st appeared in Superboy #68 and was a hit. The Bizarro concept was moved to the main Superman title shortly thereafter, there was even a President Kennedy and Marilyn Monroe Bizarro (Adventure #294 Stan).

Superboy #68 was written by Otto Binger and drawn by George Papp, the issue boasts a cover by Superman stalwart Curt Swan.

Not many copies trade because of the low amount that have been graded to date. Only 91 have been CGC graded as of this post with only 4 getting an 8.0 or better (the highest is a 9.0).

I think this is the type of book you can dig out of old comic dealers’ DC bins at a con. The book has probably sat for a while and you may pick it up for a bargain.