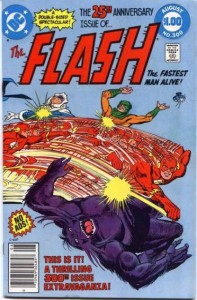 Sometimes we need to think small and be satisfied with the little victories that are there for the taking. String up enough of these in a row and you’d be surprised how far along you’ll get.

It takes just under 250 bagged and boarded comics to fill a long box. Now a long box does not take up that much room, slide it in the back corner of your bedroom closet, put a small blanket over it and use it as your slippers rack! Value and function!

The point is if you load up that long box with little gems like this week’s pick you won’t have to worry as much about your underfunded pension plan, wait, perhaps it’s those books in your safety deposit box that should be given that responsibility. Regardless, a long box full of picks like The Flash #300 can only help.

Let’s rhyme off some of the good things this book has to offer. It’s the 25th anniversary issue all wrapped up in the 300th. Of course they are alluding to the 25th anniversary of Flash’s rebirth in Showcase #4 (though they were a month early but hey issue #300s don’t come around every day, or ever these days). These anniversary issues are highly collected and I love them. The Flash #300 also features the origin of the Flash and many of Flash’s villains, and again, I’m high on origin issues. The book boasts a super wraparound cover by DC great Carmine Infantino and to add one more neat feature to the book, it has no ads, yep it’s all Flash all the time in the 48 page Infantino penciled epic titled A Flash Odyssey!

The best part is you get as many as you’d like. Seriously, grab a handful, though you should be mindful not to put all your eggs in one long box.