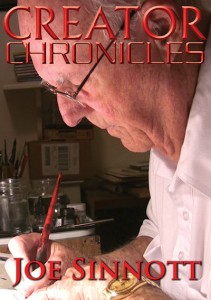 After writing last weeks column, I received the just released DVD of The Creator Chronicles featuring the Legendary inker Joe Sinnott. Now Joe was born in 1926 and is still working today, inking the Sunday Amazing Spider-Man newspaper strip. Joe is, without a doubt, most recognized for his amazing contribution to the Fantastic Four run with Jack Kirby. Joe inked issue #5 featuring Doctor Doom and was scheduled to stay on the book inking Kirby. He left after inking a few pages of #6 not to return until #44 which was the introduction to the Inhumans saga followed by the Galactus Trilogy and what I call the best 50 issue run in the history of comics.

Joe’s contribution to the Fantastic Four cannot be underestimated. Just think of what the early FF would have been had he stayed on the book starting at #5. He had made a commitment to do a Classics Illustrated job and therefore was unable to stay on the FF. When he left he was followed by some inkers that really didn’t add anything to Kirby’s artwork and quite honestly helped to diminish the Kings impact. Chic Stone’s heavy line and George Bell come to mind. I think there would have been a maturation of the FF much sooner if he had stayed.

Thankfully we have the great run that followed.

At the time Joe was inking the FF he produced 2300 pages of romance pencils for Charlton. All those great Vince Colletta romance yarns were uncredited Joe Sinnott pencils. He also penciled many issues of Classics Illustrated and worked outside of the comics industry.

One of the things that Joe said in the interview really stuck with me on what made the Silver Age so special was that there were some great inkers that were responsible for the look of many of the Silver Age titles.

Jack Kirby penciled both the Fantastic Four and Thor. They both had distinct looks to them.Where Colletta’s inking didn’t work at all on the FF (check out issue 41-43), his scratchy penmanship really helped to make Thor, for the most part, shine. The outer space, science fiction look of the Colonizers and Galactus Sagas fit perfectly within the Asgardian universe.

Jim Mooney inking John Romita on their Spider-Man run was the standard that all others are measured against. John Tartaglione and Syd Shores gave Daredevil his unique look over Gene Colan’s pencils. George Klein over John Buscema’s early run of the Avengers followed by Tom Palmer.

I could go on but I think Joe really hit the nail on the head in this observation. I mentioned last week about the similarities in many books today because of the use of Photoshop and Illustrator and what I think is the overuse of it. I think when used in a limited fashion it is a great tool, but I still like the work today that is done primarily, where it is used sparingly.

Digital artwork also removes the after market for many artists as they work exclusively in that medium. I have noticed that artists like Alex Maleev are now doing more the old fashioned way, particularly to be able to capture the after market sales of original comic art.

One last thing about Joe Sinnott in particular. Everybody wanted Joe to ink their pencils. He added a shine to any one he inked primarily because he being a penciler, could fix up some mistakes that are inevitable when you are producing so many pages of artwork .

So lets hear it for the inkers for a change and the incredible job they did on our favorite tales. Lets not forget Frank Giacoia: he did great work over Buscema (both of them), Colan, and Kirby. Dan Adkins also made everyone look better. Both of these guys were also strong pencilers as well. And I would be remiss if I didn’t mention Murphy Anderson and Dick Giordano over at DC at this time. Rock solid inkers as well.

Anyone interested in the DVD on Joe Sinnott can find it here. It is a great 3 hour history lesson with a few tutorials as well.