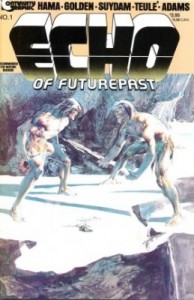 This week the Undervalued Spotlight features a submission from guest writer Jonathan Winchester. Jonathan picks a beauty from that Copper Age of comics I love so much. There are so many undervalued books from this era and Jonathan’s pick is definitely one of them.

Neal Adams is a giant in our hobby and he’d been the catalyst for so much positive change. This week’s pick exemplifies Adams’ fearless ambitions.

OK so lets turn this bad boy over to Jonathan.

The Echo of Futurepast title only lasted nine issues, and was a more gritty, violent, and sexually charged book than the mainstream publishers at the time were offering. The comic was also groundbreaking, using high quality magazine-style glossy pages, leading to an extremely high price point for the time of $2.95.

This coincided with Adams’ belief that higher priced books were more attractive to retailers because of higher profit per unit sold.

Besides Echo of Futurepast #1 being an important slice of comic book history, this book also has a few other key factors that make it a must-have for any collector.

Echo of Futurepast #1 features the first installment of Neal Adams’ classic Frankenstein’s monster, Dracula, and Wolfman story that was later re-published by Vanguard Productions in 1993, and more recently published as a graphic novel under the title ‘Neal Adams Monsters’.

This comic also features the first appearance of the green hare captain of The Righteous Indignation, Bucky O’Hare, written by Larry Hama and penciled by Michael Golden. These stories eventually were collected into an oversized graphic novel, and re-released in manga format in 2006.

Bucky O’Hare eventually was turned into a cartoon that lasted one season in 1991, accompanied by Hasbro releasing a line of action figures. In 2013 Hasbro attained the rights to the cartoon, making a DVD release a possibility.

Recently on Ebay, the Bucky O’Hare Nintendo game sold for over eighty dollars, showing that popularity is still high for the character. Neal Adams also said during an interview with Kevin Smith that he is currently “in talks” about a Bucky O’Hare movie project. With the success of Guardians of the Galaxy featuring Rocket Racoon, and a Howard the Duck cameo, Hollywood is going to be more willing to get behind a CGI animated franchise.

Echo of Futurepast #1 is a 30 year old book with high historical factor and a key first appearance of a character that is on the verge of reemergence.

Copies of Echo of Futurepast #1 are extremely cheap right now. You can get a raw high grade copy on Ebay for under $5. Get it now before things move forward with the Bucky O’Hare project. It is a small price to pay for a book with this much history and upside.

The 44th  edition of the Overstreet Comic Book Price guide shows 9.2 going for $6.