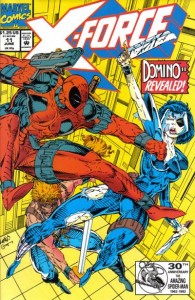 Remember than line in the old Marathon Man movie from the 1970s? Where Sir Lawrence Olivier is torturing Dustin Hoffman with some dental hooks?

I found myself asking the same question when I was contemplating this week’s Undervalued Spotlight.

It all started 142 posts ago when I put up Spotlight #79. You guys beat me up pretty good on that one, even at conventions I’d have guys walk up and go “really?” Unlike the Hoffman character, I loved every minute. While I make it a mantra to firmly believe in every book posted on the Spotlight there’s nothing I like more than some differences of opinion. It would be boring if I was always right.

What the hell do I know anyway?

I think that is a good segue into X-Force #11, this week’s Undervalued Spotlight feature.

X-Force #11 features the second Deadpool cover in the title and at least in this one he’s front and centre in the action, sharing the scene with Domino and Shatterstar.

The book delivers more than just a Deadpool cover; it also features the introduction of Weapon P.R.I.M.E. team.

Garrison Kane (into in X-Force #2), the then Weapon X and a former member of Cable’s Six Pack mercenaries (intro in X-Force #8) forms the team to hunt Cable down and bring him in.

This is a cool team that includes Kane, Yeti, Grizzly, Tygerstryke and several others. They all work for Department K, the Canadian Government department responsible for Weapon X. The world of the whole Weapon X concept is a big complicated one, its most famous son is of course Wolverine. Weapon P.R.I.M.E. is in this mix.

I’ve noticed this book getting some attention lately and prices have climbed above the bargain bin amounts at some places but not all. You should still be able to hunt these down for a couple of bucks each at the local con or at the local comic shop.

As of this post there are 110 CGC graded at 9.8 though I don’t think a slabbed copy is necessary, I’d prefer you go out and grab several nice tight raw copies that have been pressed up against each other after years of being wedged inside those cramped slow moving X-Force bins.

Let’s not forget that Deadpool is a very hot property and things should only get better in terms of the character’s popularity.

The 44th edition of the Overstreet Comic Book Price Guide shows $4 as the 9.2 price.