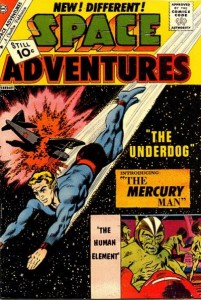 You’d have to go back to the infamous April Fool’s Day post of last year to find a Charlton comic featured on the Spotlight, and I didn’t even mean that one! Still, it’s been way too long without a Charlton – if you ask me.

I bought a nice group of books recently that included a strong run of Space Adventure. One of my favourite books in the pile was a tight crisp copy of this week’s Undervalued Spotlight pick, Space Adventures #44.

Mercury Man was very much a product of the early 1960s and followed the tradition of Captain Atom and Doc Solar. His run in the title only lasted until the next issue, #45. Mercury Man never really got the chance he deserved.  Never say never though…

…In 2014 Tommy G Warren / Spiderwood Productions acquired the rights to Mercury Man and have launched an on line project now 3 episodes in. This mercuryman.com re-launch hopes to propel Mercury Man back into the mainstream world of superheroes. I’m hedging that a well devised and executed project will inject new life into this 50+ year old character and by extension renew interest in this week’s Spotlight pick.

I think this book is a good gamble. You’re getting some true scarcity here. This is a 10 cent comic that predates every Marvel character except the Fantastic Four and Hank Pym. There are only 12 graded at CGC 9.2 or above.