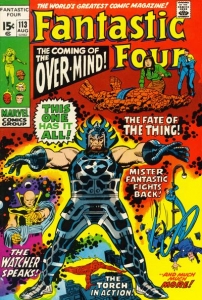 A few days ago I sorted all my Undervalued Spotlights alphabetically. I did this exercise to help me see if there were areas I was not adequately representing, the Spotlight mantra being all eras/all genres/all price points.

I noticed I had an issue with the Fantastic Four. There have been seven FF’s represented on the Spotlight but none of them were above issue #48. That actually shocked me when I saw it. Did the Fantastic Four stop being relevant in 1966? Are there FFs above #100 worth buying, worth investing in with value appreciation in mind?

I’d just posted FF #12 a couple of weeks ago but I had to strike at this while the fire was hot. My mission was obvious and it couldn’t wait.

This week the Undervalued Spotlight shines on Fantastic Four #113.

Fantastic Four #113 also contains the 1st appearance of Over-Mind. Over-Mind is an Eternal from the planet Eyung (not the same concept as the 1976 Eternals). Over-Mind possesses the pooled minds of his kind, hundreds of millions of minds assimilated into one, his. All these minds acting as one give him great psychic powers, he can scan the thoughts of others and take over their minds by projecting his thoughts into their minds. He’s a very formidable foe besting the likes of the Stranger and Doctor Doom.

His battle against the Fantastic Four lasted 4 issues, ending in the above mentioned FF #16 giant sized issue.

Over-Mind is as cosmic as they come. As a warlord of the planet Eyung he reigned as a champion of their Gladiatorial arenas. I of course immediately thought of Planet Hulk and how cool it would be to feature Over-Mind in one of Hulk’s battles.

The dozen or so FF’s past issue #112 are actually a bit ahead of the 30 or so issues before it collect-ability wise . Being in close proximity to the likes of #112, #116 and the Panther issues #119 and #120 at least give this book a pulse. I also don’t think the book is getting the respect it deserves as the start of the story arc that ends at #116.

Fantastic Four #113 may not be one of the title’s big key issues but it does a great job of adding the FF canon. The book features appearances by the Watcher and the Hulk, it also features a prominent Over-Mind cover. There is no downside to this book.