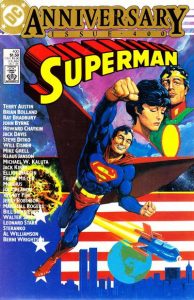 Well, here we are at Undervalued Spotlight #400. I think this is a great time to thank you all for your continued support and thoughtful comments. Your comments, whether in the shop, at comic cons, through emails or below in the comments field are what keeps me going.  When I started this way back I would get a little nervous of comments that questioned my pick. Today I find myself enjoying all comments, pro and con, it’s the engagement that I enjoy. I also have to thank all the Guest Spotlight writers who’ve helped us get to #400, keep them coming.

How many titles enjoyed an uninterrupted 400 issue run? Or an even harder question – how many characters enjoyed an uninterrupted 400 issue run? This is not an easy feat to accomplish, you have to be good for a long long time. Here’s what comes to mind… Superman twice (Action and Superman), Batman twice (Detective and Batman) – I think they are the only 2 DC characters that have made it. Archie, Fantastic Four, X-Men, Spider-Man in Amazing Spider-Man and which others? Thor if you count his Journey into Mystery run. Which ones am I forgetting? I’m talking a specific character run.

Anniversary issues are always collectible, I know a few guys that are trying to build Anniversary issue collections. Anniversary issues that actually play up the anniversary are that much better, just look at the high demand the recent releases of Action Comics #1,000 and Amazing Spider-Man #800 enjoyed. Superman #400 really plays up the anniversary with a line up of talent that is hard to fathom. Where do I start? Howard Chaykin did the painted cover, Frank Miller did the back cover pin-up, Jim Steranko wrote and drew a 10-page story, contributions also came from Moebius, Will Eisner, Jack Kirby, Bernie Wrightson, Steve Ditko, Jerry Robinson, Brian Bolland, John Byrne, Ray Bradbury and more. The only guy missing I think is Stan Lee!

Talk about a Signature Series dream book, I’m sure there are copies out there with an amazing array of creator signatures. Even today enough of this stellar talent are still with us to make for quite a Signature Series prize. Not surprisingly the CGC Census shows 79 blue labels graded versus a very high 43 signature series labels, almost as many yellows as blues.

The market couldn’t care less for this book, a CGC 9.8 recently sold for $62.

I like the long-term prospects for Superman #400, its an early book in the highly collected Copper Age, its an anniversary issue, it has a ridiculous amount of talent associated with it and it’s practically worthless right now. I think it’s a great time to pick up a nice crisp, clean, tight copy.