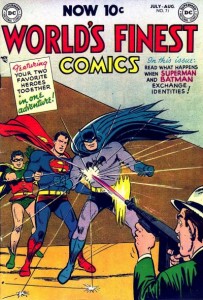 World’s Finest #71 was printed at both an historic low point for superhero comics and a major turning point for the American comic publishing industry. Though crime and horror comics ruled the day, behind the scenes Dr. Wertham and the US Senate were about to deal a death blow to all that sex and blood that comic books were dispensing to the youth of America. The Comics Code Authority that came out of all those Senate hearings on youth delinquency would start appearing on comics in a few short months (March 1955 on most DC comic books). The implementation of the Code would eventually lead to the revival of the superhero.

But it’s 1954 and DC Comics is really the sole viable keeper of the superhero flame (I won’t count Atlas’ attempt with Young Men #24 as viable since it turned out it wasn’t). DC had healthy selling titles devoted to their trifecta of crime proof and horror proof superheroes. I unofficially count 9 long standing titles devoted to DC’s main heroes Superman, Batman and Wonder Woman. DC also used short six page back up stories to keep characters like Aquaman and Green Arrow alive.

The only title to run two of the major characters in the same book was World’s Finest. Since the spring of 1941 World’s Finest ran separate Superman and Batman stories in its pages. The title saw sales gradually decline over its first 13 years. While keeping its 15 cent cover price the title went through 4 page count reductions during these first 13 years seeing the initial 100 page issues drop to a mere 68 by the time issue #70 was published. Shaving off a third of the page count and over half the story count while still charging the same price is a recipe for decreasing sales in my opinion.

With issue #71 the World’s Finest page count falls from 68 to 36 and the price finally dropped to the industry standard 10 cents.

Unfortunately for DC cutting the book to 36 pages meant there was not enough room in the book for two main features so DC was forced to write Superman and Batman as a team!

It’s hard to believe but World’s Finest #71 marks the beginning of the Superman/Batman team ups. Superman #76 two years earlier (June/52) contained the first story of Superman and Batman learning each other’s identities and while a very sought after issue its price is much more realized.

Oddly enough the first time we see/hear a Superman and Batman team up is on March 2nd 1945 on the popular 1940’s Mutual radio show The Adventures of Superman. That same radio show was the first place we’re introduced to the characters Perry White and Jimmy Olsen.

World’s Finest #71 has a Win Mortimer cover and  features Curt Swan pencils on the 12 page Superman/Batman team up story called Batman – Double for Superman. In the story Lois Lane learns Superman’s identity forcing Superman and Batman to come up with a way to convince here she is wrong. Switching roles is the genius solution they come up with, and it works!

The issue is rounded out with a 6 page Green Arrow story and a 6 page Tomahawk story featuring Nick Cardy pencils.

The Overstreet Price Guide lists World’s Finest #71 as scarce. There are only 37 copies graded by CGC as of this post and the highest grade is only a 7.5. There are no high grade copies of this book graded! Compare that with the 91 graded copies of Superman #76 of which 20 grade over a 7.5 and you get a sense of how tough this book is.

The funny thing about World’s Finest #76 is that it is a bit unassuming. The cover is not instantly recognizable, the title is not the most collected, it’s easy to miss this book. Here’s a tip, don’t let this book slip out of your hand if you’re ever lucky enough to be holding one.

This is the type of comic that can still be found in collections, it’s one that may have survived guys going through collections and pulling out key issues. Memorize the cover and keep on the lookout!