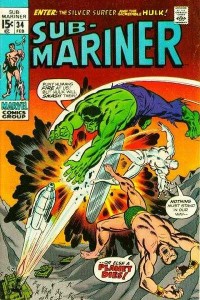 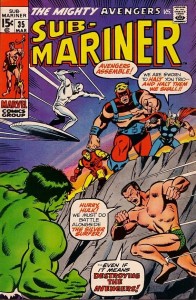 There are comic books out there that are slower than they should be and Sub-Mariner #34 is one of them. I’m actually going to include Sub-Mariner #35 as well since both these books serve as the prelude to the introduction of the Defenders in Marvel Feature #1.

Is it the fact that these issues are buried in the Sub-Mariner title? The Subby run is a pretty dead run, would this story be worth more if it was published in the Hulk run? We are moving away from titles more and more as collecting strains.

It was actually guest Spotlight contributor Mike Huddleston’s upcoming Comic Book Daily column on story arcs that kind of convinced me to include #35 in this post. Key issues, key arcs, books that connect to others etc are collecting strains that are on the rise!

How many good books are neglected because they happen to be embedded in slow titles? How many Mystery in Space #75s are out there all but forgotten?

The Defenders are a safe bet going forward; Hulk, Sub-Mariner, Doc Strange and the Surfer make a formidable team. Personally I like anything remotely associated with Doc Strange over the next couple of years (these books are connected through the future team formation).

There’s another angle for those of you that like playing long odds. Things would really heat up for these issues if Marvel ever wrestles the Silver Surfer rights from Fox. Not possible you say? I remember a year or two ago reading Marvel trying to work a deal with Fox involving letting Fox keep Daredevil longer if Marvel could get the Surfer and Galactus. Fox obviously never went for it since Daredevil is with Marvel now but what that report did tell me is that Marvel is on the case, they are trying to work deals to make this happen. Fair warning, the moment you hear the news it will already be too late. Load up now!

Hope I’m not too late with this post; hope a few more fly into your collection below the radar.

Roy Thomas wrote both issues and the great Sal Buscema drew them. Stan Lee was still acting editor for both issues. I like the cover to #35 better being an Avengers fan.

Strengths that make these comic books a good long-term investment are: