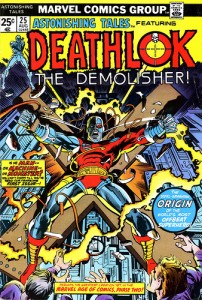 Astonishing Tales #25 features the 1st appearance of Deathlok the Demolisher. The Frankenstein inspired character, a Cyborg reanimated from the corpse of American soldier Col. Luther Manning, was created by Rich Buckler. Doug Moench gets script credits and co-creator credits for the story but the concept and design was Buckler’s.

Not known to many was the fact that Buckler had some un-credited Canadian help with creating Deathlok. Aspiring Hamilton, Ontario artist Vince Marchesano would travel to Detroit on weekends to help Rich out with the Deathlok character. Vince and Rich would throw ideas back and forth, coming up with innovative page layouts along the way.

I asked Vince a few questions and his input was insightful. Vince states they went for a cinematic feel “we tried to make the layouts

like a movie, with short sequences”. By the way, the pages with the multi small panels were mostly Vince’s idea!!

They worked quickly to get a finished version to Roy Thomas, EiC at Marvel, “I remember everything was a bit rushed” recalls Vince. Vince of course went on to famously “ghost” the art for Buckler on Batman #265, Fantastic Four #161, 162 and a few others.

Astonishing Tales #25 is considered a Bronze Age key along the lines of Marvel Premiere #15 (1st Iron Fist, 5/74). Though Deathlok never reached the popularity levels of Iron Fist the character concept is a good one and one that could make a successful comeback.

Deathlok was influential. Just have a look at DC’s Cyborg that was introduced in 1980, did he borrow Deathlok’s face plate? According to this month’s Back Issue Magazine Deathlok also influenced the creators of Robocop. Here is a great Bronze Age property that nowhere near reached its potential.

There were 2 later Deathloks, the Michael Collins version introduced in Deathlok #1-4 (July-Oct. 1990. This second Deathlok went on to a very credible 34-issue series from 7/91 to 4/94.