By my reckoning (and I hope I haven’t missed any), there were 48 WECA comics on offer in last month’s ComicLINK auction. You can check out results from the October auction here and last year’s summer auction (which will also provide you with links to a couple of earlier auctions) here.

Below is my record of the February Auction winning bids ranked from highest to lowest:

Before looking at some individual results for this auction, let’s take general stock of what’s happened in terms of sales of these books during the last two or three years. Since the start of 2014, ComicLINK has auctioned off just over 300 WECA comics and this has to be looked back on as a comparative market glut of these scarce Canadian war time comic books. I suppose we have to thank ComicLINK for slabbing these books and bolstering CGC Census results from what had previously been just a smattering of examples. I wonder how many American golden age books ComicLINK auctioned off in the same period? Probably 10-20 times that much and when you take into account availability of American golden age books on other auction sites and eBay and how many American golden age books are represented in the census you can’t compare the two universes at all.

Most people don’t buy WECA comics to flip. They want to have one or a couple, or everyone they can get, in their collection. Most collectors, but not all, who want these books are also Canadian because of the weight of the cultural currency they carry and because they are something of our own we can now be proud of.

This auction bears out the usual comic collector’s truisms that keys, characters and covers drive values of comic books. With Canadian WECA comics these core axioms are overlayed with the fact that scarcity of these books can always trump (apologies to everyone) the others and skew demand.

The top value reached in this auction was for a clear “key” Dime Comics 1 which houses the 1st appearance of Leo Bachle’s Johnny Canuck who has become one of the iconic forces of the period. See Walt’s Auction Highlights #98 for Walt’s take on the book and Steeve V.’s additional comments. These keys will always be sought after. 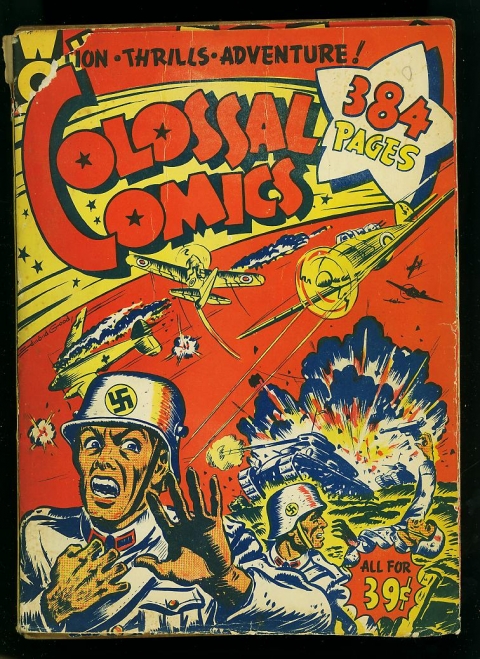 Number 2 on the list is the red cover issue of Bell Features’ Colossal Comics (too thick to be slabbed, ComicLINK graded it at a 5.0). Colossals had no numbers but appeared with three different covers. They may have been mail order only, but I suspect Cy Bell must have had them on the news stands at some point when he started producing them in 1944. Each one of the three covers wrapped around six remaindered Bell Features issues, some with their covers intact and some missing either the front or back cover, or both. Adrian Dingle did all three alternate covers but the kick to these big 330 plus page books is that they also had alternate insides as well with a different random selection of six Bell books each time. This particular red cover, with the Nazis in the foreground running from an Allied air attack is the best of the lot and this particular issue on offer had 4 of the inside comics with their front and back covers intact (Wow 6, 7, and 9 and Joke 4 – 1st appearance of The Wing).

Strangely enough I know of more than one person who has an intact Colossal with a number of the inside books having complete covers, who has thought or is thinking of disassembling the comic and selling the contents as stand alone issues. The trouble is that not only do these excised books have glue residue and colour breaks up and down the spine, they also suffer from the fact that once the original individual issues were assembled and glued together to the new cover, the whole Colossal assemblage was trimmed to even out the edges of the stacked comics. We certainly find examples of individual Bell books that show evidence of being pried out of a Colossal issue. Here’s one example in my own collection—an Active 20 (compare it with the slabbed copy in the auction):

In any event, this red cover issue of Colossal Comics was the gem of the WECA books auctioned this time. 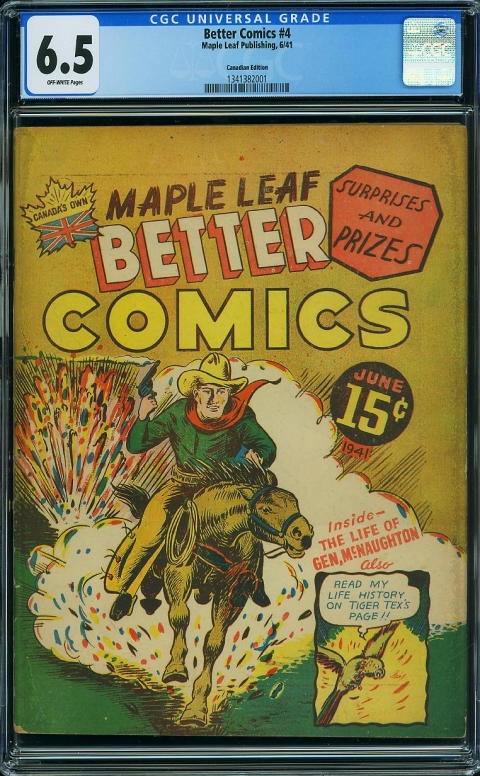 The next comic in the top ten was Better V. 1 No. 4 and I think that this went so high because it is an early (June 1941) Maple Leaf book. It’s probably one of the first 10 WECA comics and precedes Triumph No. 1 by a couple of months. 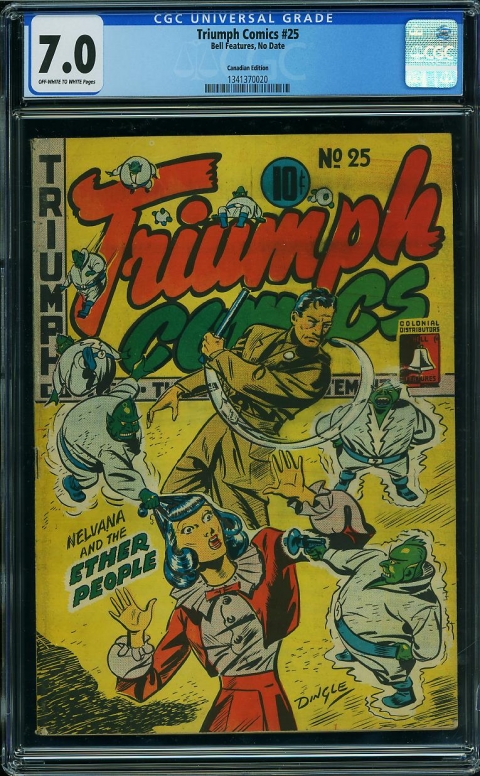 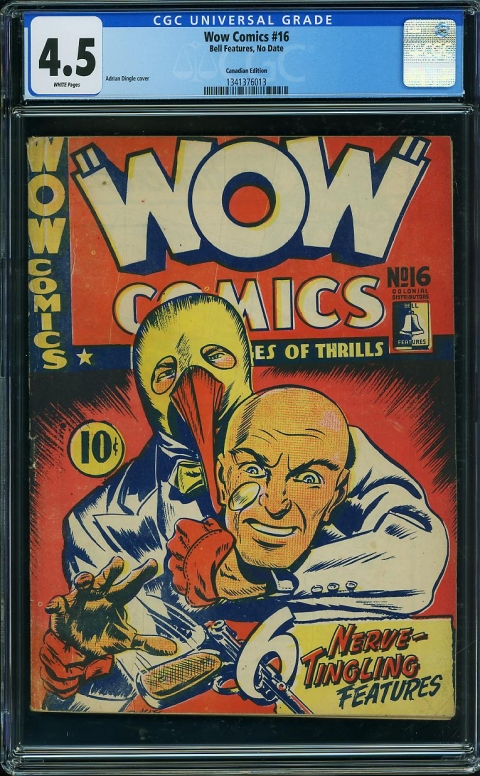 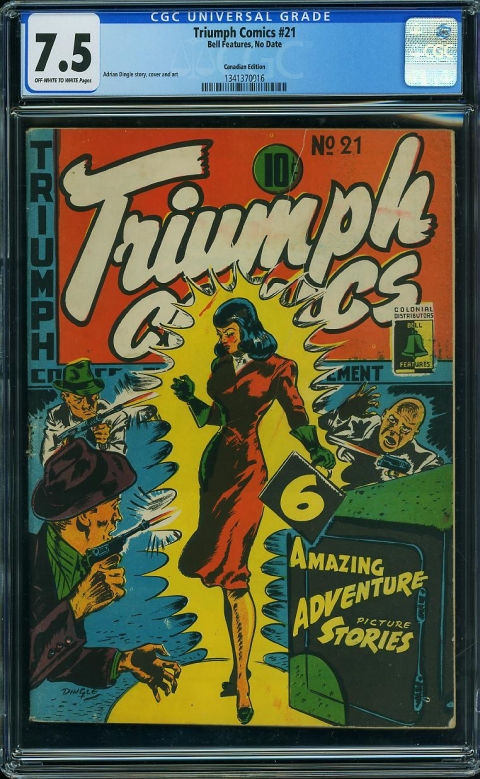 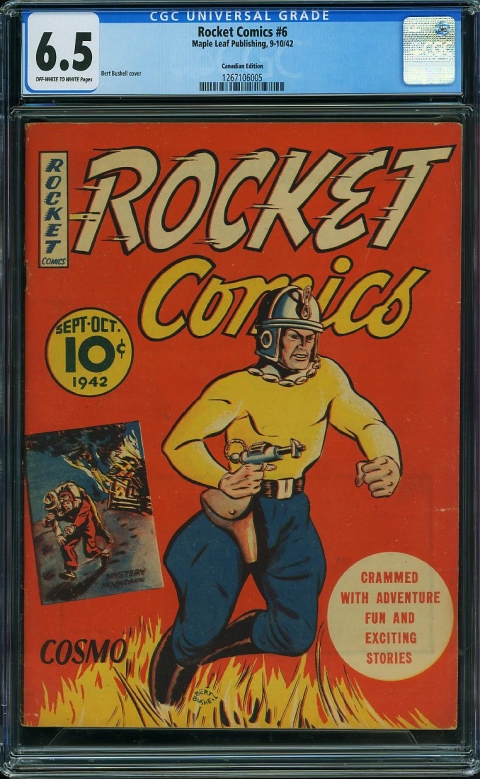 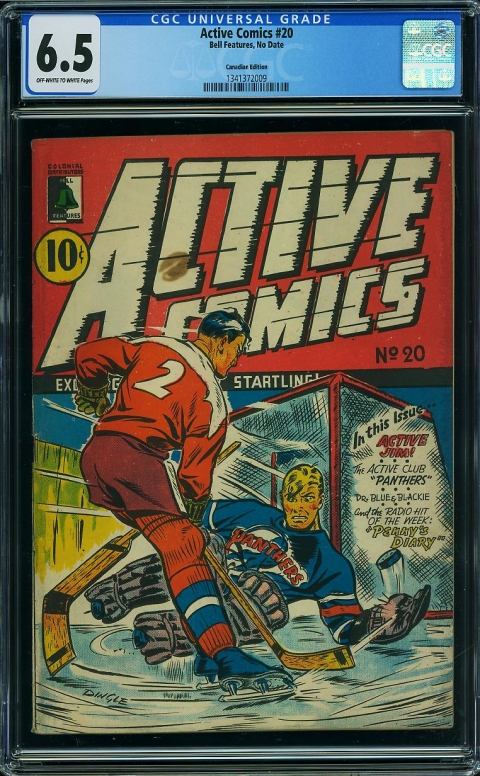 The next five books on the list are all cover books. Triumph 25 and 21 are both Dingle Nelvana covers with the #21 cover having her in her new alter ego of Alana North. Wow 16 is the first Penguin cover and one of the best. Rocket Vol 1 No. 6 is an iconic Bert Bushell Cosmo cover that evokes a whole bunch of Buck Rogers techno-magic and Active No. 20 with it’s sought after Dingle hockey cover (a rare but totally Canadian theme in comics and it looks to be very sought after). 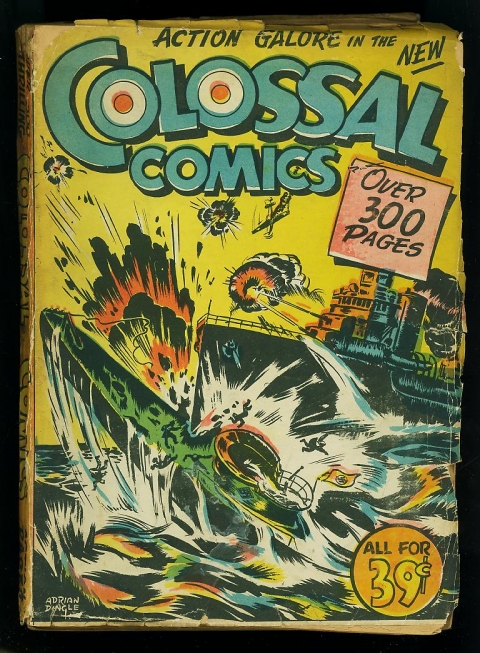 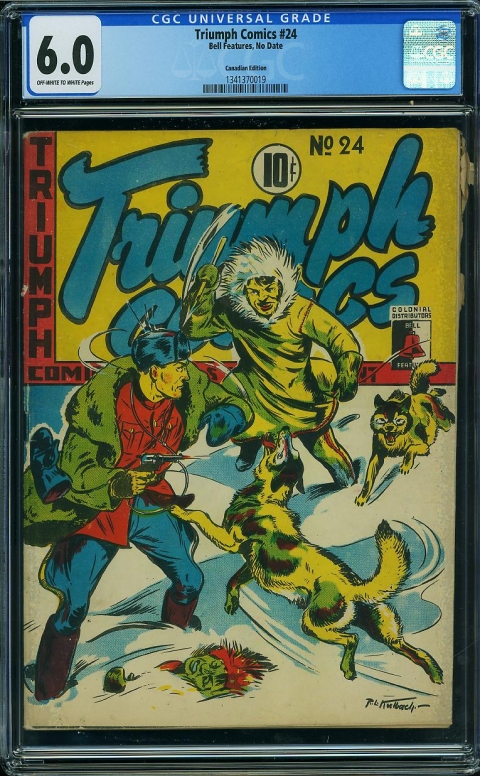 Rounding out the top ten are another issue of Colossal Comics, featuring the submarine cover but this time with the content comics only having their back covers and a Triumph 24 which starts the “Nelvana and the Ether People” arc. 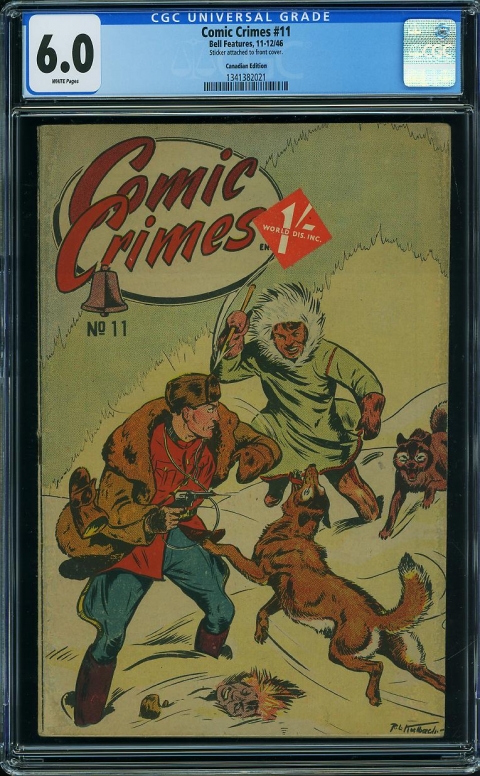 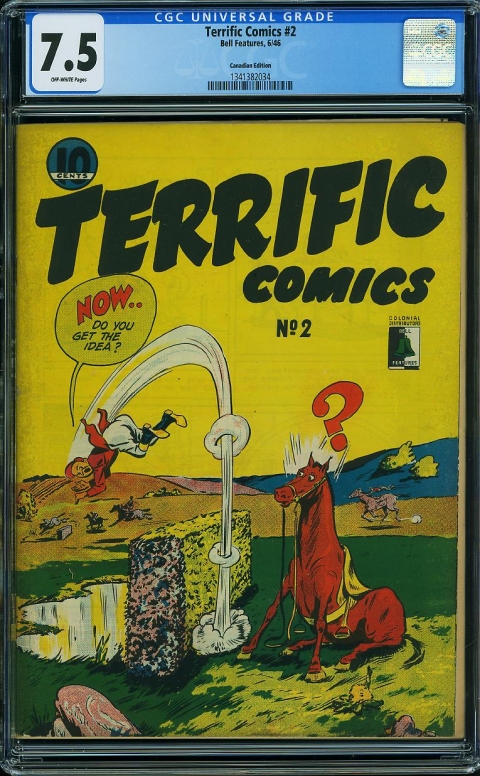 A couple of books that went a little higher than I thought were late 1946 reprint books. Comic Crimes 11 with it’s red diamond-shaped one shilling sticker (showing this book was mainly put together for British distribution) and the Rene Kulbach cover graphic taken from Triumph 24. The other was Terrific Comics 2 which has an original cover by an unidentified artist but still contained only colour American reprints. The latter was the better buy of the two in my opinion. 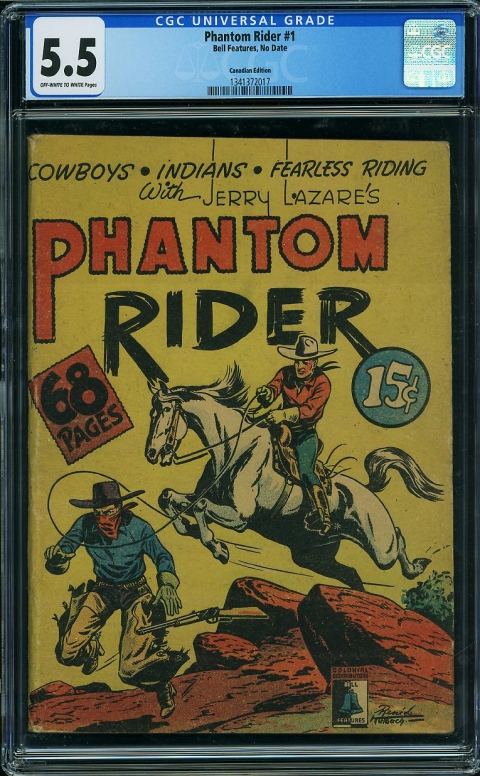 Some books I felt were a little short changed were the Phantom Rider 1945 Compendium which brought in $311. This is one of the six Bell Compendium books which is a very hard set to complete (especially with the current asking price for the Nelvana Compendium). It has a great original Rene Kulbach cover and a new, previously unpublished Jerry Lazare story inside. I think artists like the Kulbach brothers will be more collectible once more is found out about them (when my book on these artists finally comes out, for example). 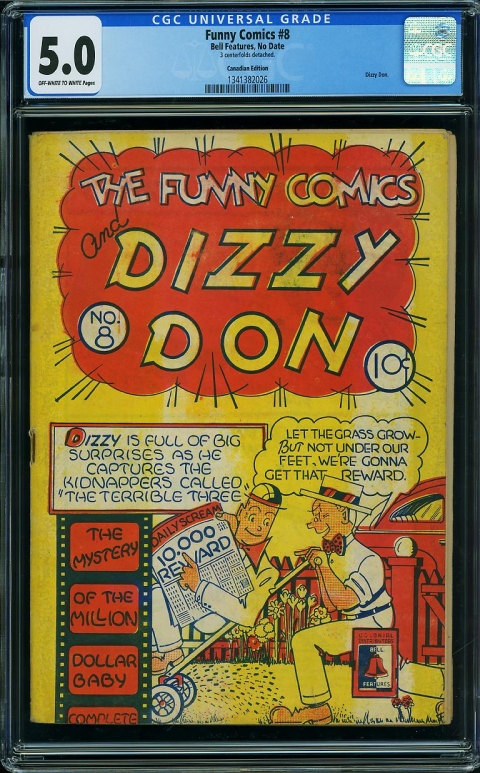 Also, Manny Easson who came up with Dizzy Don for Bell’s The Funny Comics and The Funny Comics have received precious little love in any of these ComicLINK auctions (the one in this auction, No. 8, coming in second from last on our list). Easson’s Dizzy Don stories are wonderful reads and shouldn’t be so readily dismissed. Dizzy is like a Harry Langdon caricature of Dick Tracy with a whole stable of oddball villains that result in intrigue and crazy adventure. 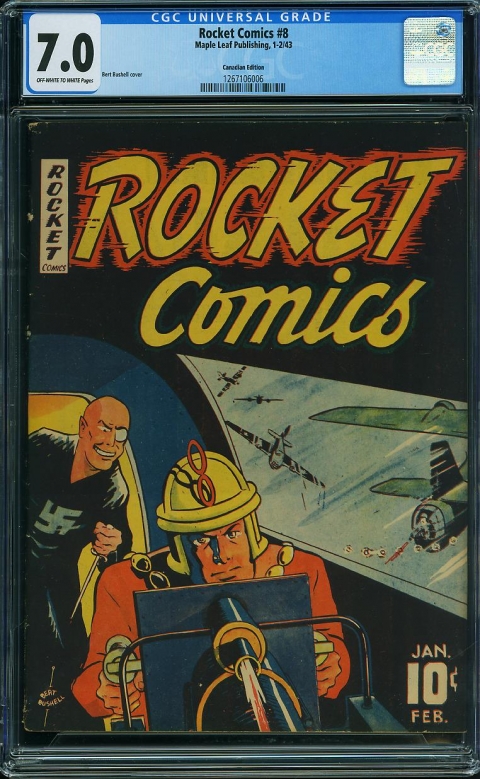 WECA comics are clearly on collectors’ radar now. The question is whether or not this will keep a relatively steady stream of these books coming to market or are we going are we going to see supply dry up again for a long period of time. The coming March ComicLINK auction has about 16 WECA books up for auction and a half-dozen of these are the more common Anglo colour books from 1945-46. Let’s see…. One thing I do know is that, given the present market for WECA books, I am left grasping at the low hanging fruit but without being bitter about that. I’m happy that these books have received the collecting recognition they have. They do deserve that… and more. 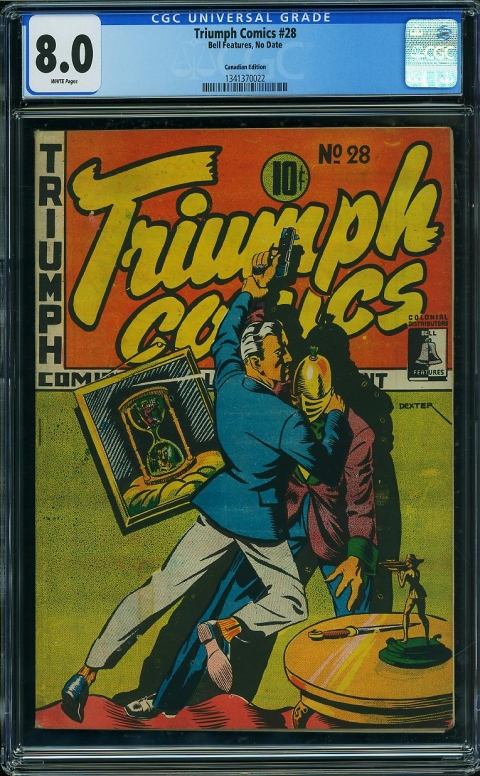 We’ll be meeting at Toronto Comic Con this month to discuss the next steps in getting out our WECA Comic Book Price Guide. Which way should we go? Here are some of the things being tossed around:

Do any readers have any input on this?