Ready to kick off the Kickstarter for my Book on the Bell Features artists called Heroes of the Home Front on or about Labour Day and was fortunate enough to get a write up by Jeff Mahoney in the local paper. The article talks about the kind donation of two pieces of cartoon art by Hamilton artists Joe Ollmann and David Collier to be used as incentives for the Kickstarter crowdfunding campaign for the book. The subject of Joe Ollmann’s piece is Aram Alexanian and the subject of David Collier’s piece is Harry Brunt. Both drew for Bell Features and both were Hamilton residents. The great thing is that these are two of the best current Hamilton cartoonists doing pieces about two WWII Hamilton cartoonists.  Here are the two pieces: 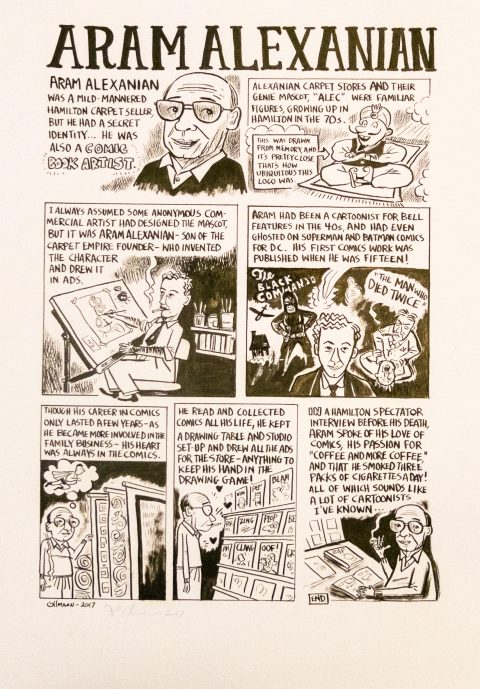 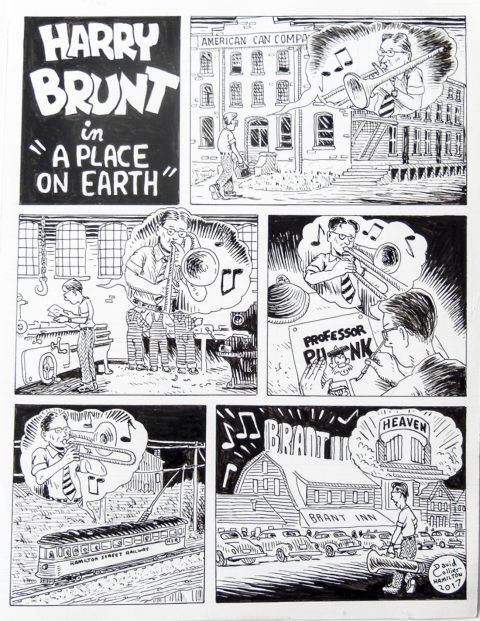 I can’t forget to mention that Toronto cartoonist Ron Kasman has also donated a similar and wonderfully-crafted piece about the first encounter between Bell Features artists Gerry Lazare and Ross Mendes who created Polka-Dot Pirate for the company.  Here is Ron’s wonderfully skillful contribution: 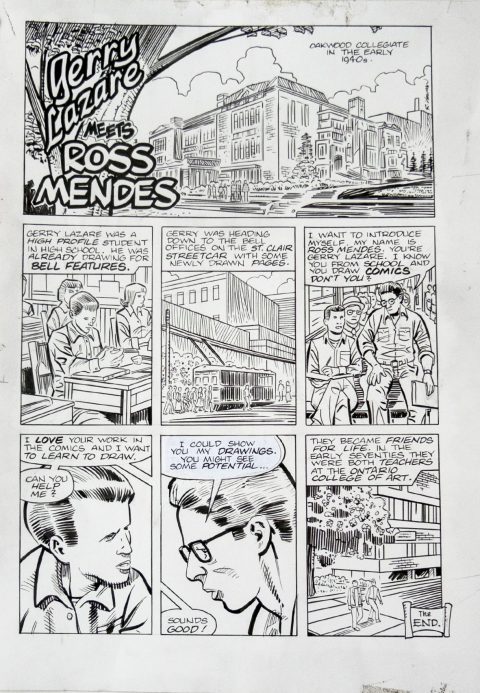 Area artist Rob Thibodeau has donated a modern take on Bell Features’ character The Whistler, replacing what would have been a poster of Hitler in the comics of the ‘40s with a modern metaphor. Here’s Rob’s art page: 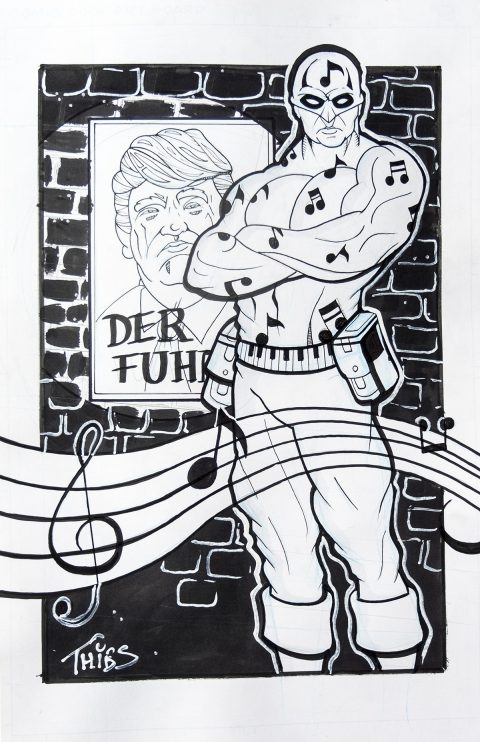 Kindest of all was Gerald Lazare’s donation of his oil painting of Toronto’s Canary Restaurant as an incentive for the crowdfunding: 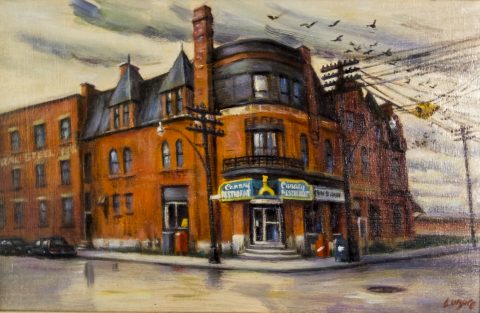 I can’t thank these individuals, who believe in my Heroes of the Home Front project, enough. It’s inspiring and makes me think that this Kickstarter might actually succeed.

While tweaking the Kickstarter for my Heroes of the Home Front book into final shape and I began thinking about the Bell Features artists I’ve had to (chosen to) leave off the roster of those presented in the volume. There had to be a ‘cut-off’ point and there are a number of Bell Features artists about whom there is very little known apart from their published comic pages.

In this column, I want to present some of the Bell Features artists who won’t be represented in my book. Come to think of it, perhaps a stretch goal for the Kickstarter (the base goal is $25,000 and this stretch goal could be realized if we reach $30,000) could be a small Appendix including samples of work by those artists who aren’t represented in the body of the book.

Here is an early draft of the Table of Contents page for Heroes of the Home Front. The page numbers are just place holders and don’t reflect the actual size of each section but the names listed are the names of the artists who will be presented in the book. Here also is the title page we currently plan to use for the book: 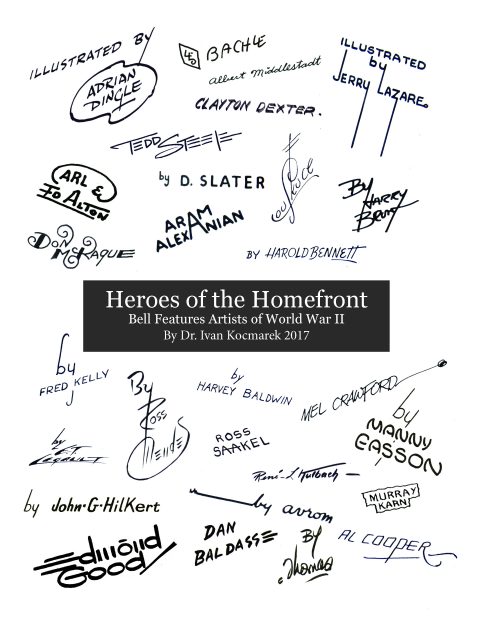 One Bell artists that I’ve ‘left out in left field’ is Edward G. Letkeman. Letkeman’s first comic book effort was a military spy called Flame Berns in Commando Comics Nos. 14 and 15. However, the strange thing about these two stories is that they are out of sequence. Narratively, the first Flame Berns story explaining how he got to Germany impersonating a Luftwaffe officer appears in Commando 15 and the follow-up appears in Commando 14. Not the first time that the editors at Bell Features were asleep.

These two Flame Berns stories were the only work Letkeman did for Bell. He went on to Century Publications to produce Space Nomads and Zor the Mighty: 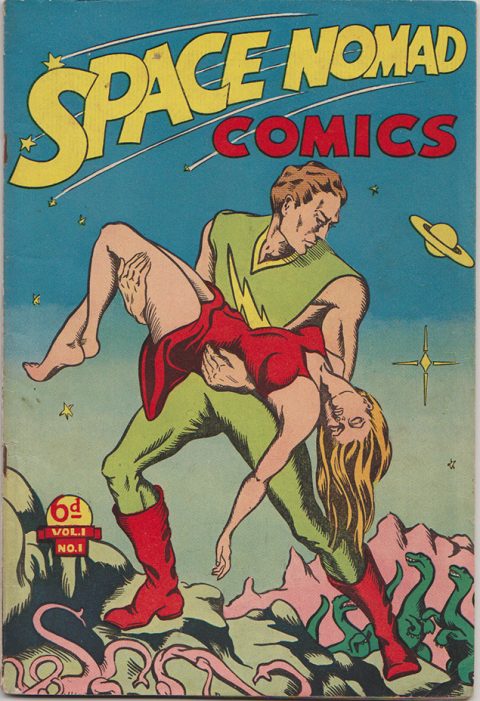 Both of these appeared in many iterations in Canadian reprints of titles such as Red Seal Comics and Punch Comics. Letkeman also did some work for Maple Leaf Publications in B. C. Here is a splash page for a story from Rocket Comics Vol. 2 No. 7: 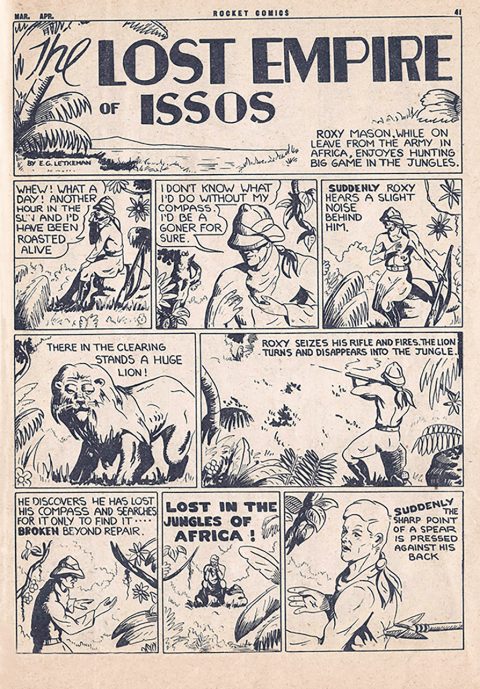 In the ‘70s, Letkeman moved to B.C. He sent some original art pages of a character he created in the ‘40s called the Canuck Kid into Richard Comely and they were published in Captain Canuck No. 2: 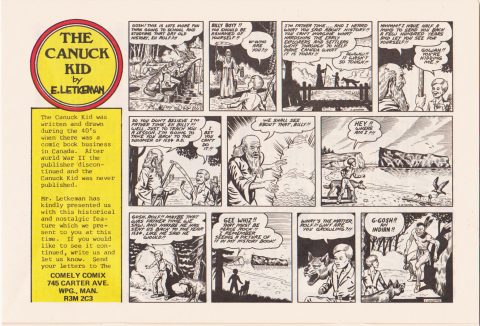 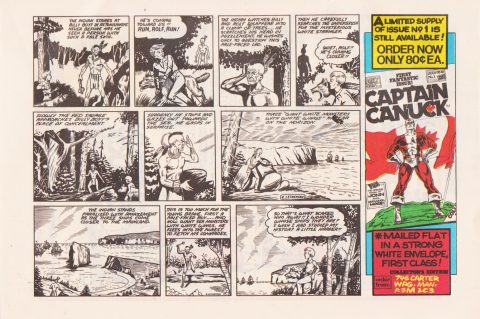 Another Bell artist not in the book is Kurly Lipas who did a series called “King Fury” in Active Comics Nos. 13-17:

‘Kurly Lipas’ was a pseudonym for Livio Pasoli who lived (and played competitive baseball) in Champion, Alberta. He was born in Italy in 1922 but came to Canada when he was about three. I don’t believe he did anything else in comics after this.

John O’Henley mostly did full page filler cartoons for Bell Comics but he should also be remembered as the creator of the Spike and Mike hobo characters that had a long running series in Joke Comics. O’Henley created the bumbling pair in Joke Comics No. 1 and also did the strip in the following issue. Tedd Steele took over the series in the third issue of Joke Comics and did it through to issue 24.

Mickey Owens also worked mainly on full-page cartoon filler for Bell and also did covers and cartoons for many gag magazines of the day.

Ed Shecter was born Israel Schachter in Toronto in 1925. He did a strip for Bell called “Marvo – Espionage Agent” in Joke Comics 8-10.

Shecter’s illustration was notable for its crude quality when compared to other Bell illustrators. A new Marvo story appears in Rucker Publications Weekender Comics Vol. 1 No. 2. Shecter went on to start his own short-lived comic book publishing company called Feature Publications and it put out 3 issues of Lightning Comics where he created a character called Captain Daring.

Bob Young mainly did craft-type fillers for Bell Features which showed kids how to carve wooden animals and toys.

He did one funny animal story for Bell called “T. D. Bear” which appeared in Active Comics No. 28. 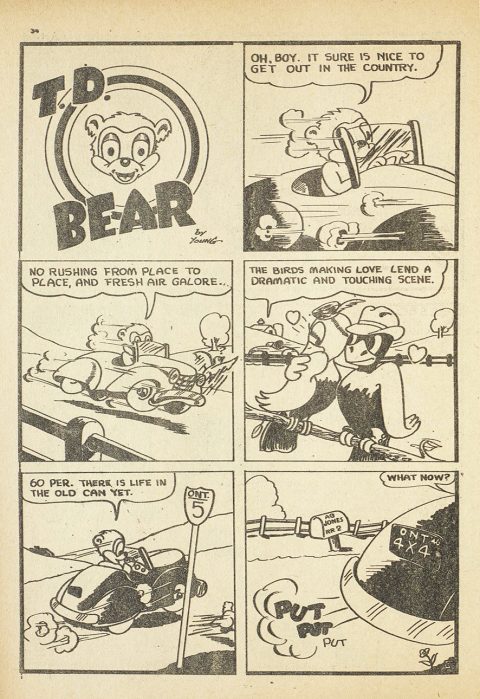 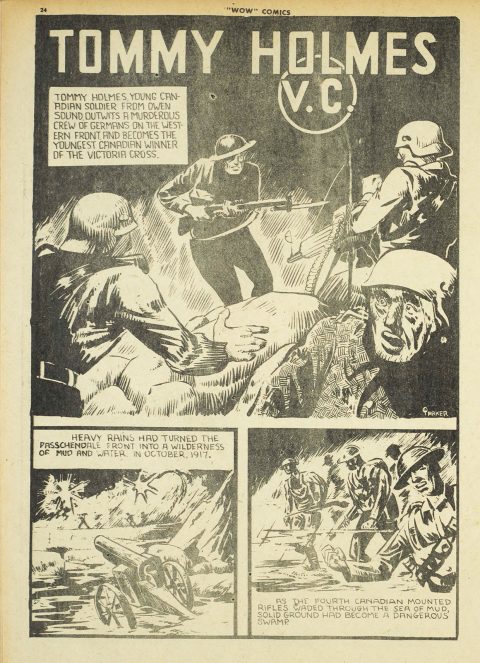 The big question is whether or not this is the same Lewis Parker who became a well-known Canadian painter of historic themes and illustrator of editorial cartoons who, in fact, worked with Gerald Lazare on a series of paintings about Huron life for the Natural History Museum in Ottawa during the late 1960s. When I asked Gerald Lazare about this possibility, he thought that it was definitely not the same person but, if it were, Lewis Parker would have been 16 when he did this story for Bell Features.

Another artist signing with just a single name, “Boddington” did a story for Bell Features in Active Comics No. 28 titled “Taffy Tumbleweed.” 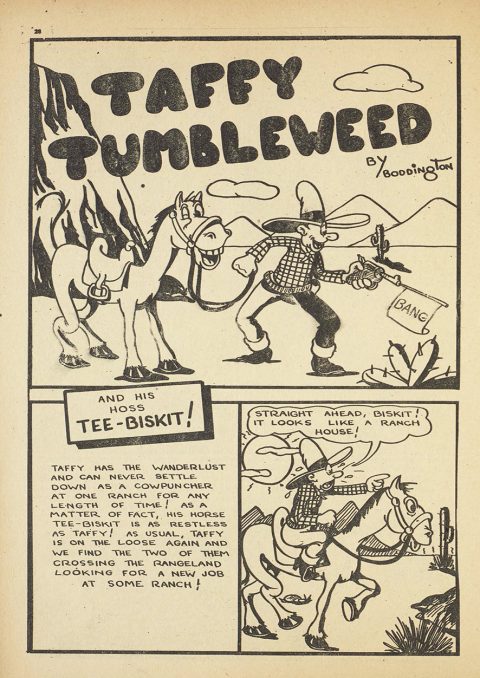 Boddington also did some of the same type of goofy, cartoony features and covers for late numbers of Weekender Comics. 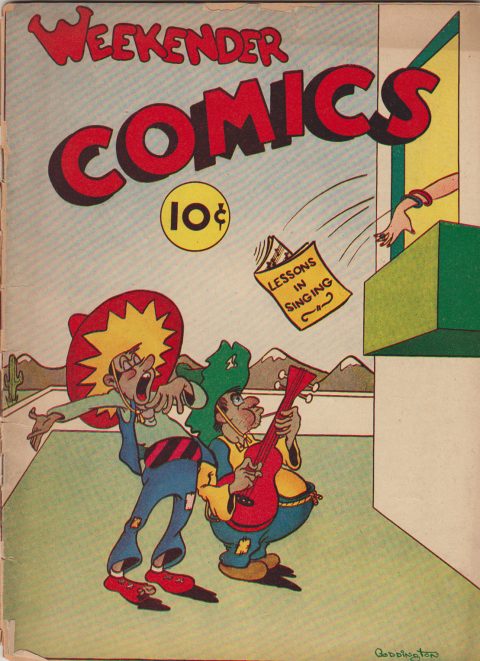 Joke Comics No. 25 gives us a story by an artist named “Van” called “Tip Offer – A Story of a Newspaperman.” 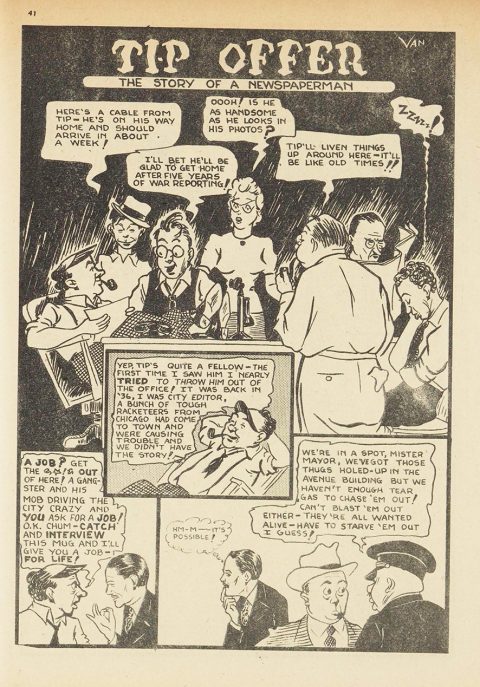 Van went on to do a couple of comic stories that appeared in a pulp magazine called Real Stories for Boys. From the table of contents to Real Boys Stories No. 1, Van is listed as the artist on a couple of stories and the “Tom Casey, the Atomic Man” story is attributed to a V. Johnson, probably giving us his full, real name. 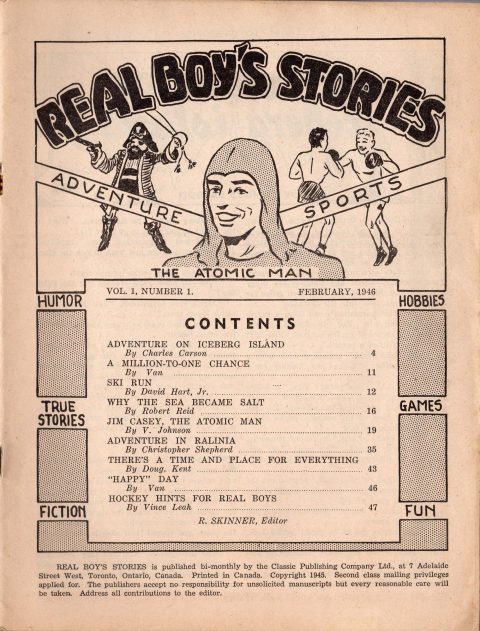 Clarence Godwin used the psuedonym “Virgan” in Bell Features. I believe that he lived in the Ottawa area. He drew a number of sparse, cartoony features. Here are a couple of examples:

I want to mention one more artist who will not be covered in my book. Maebus did a story in the last issue of Triumph Comics, that same issue with the first appearance of Fred Kelly’s Mr. Monster. The title of the story was “The Soul Detective.” 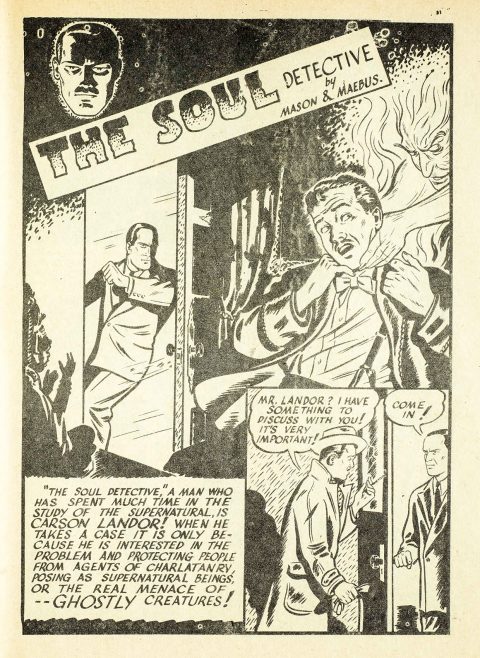 This is Russell Maebus who was born in Toronto in 1917 and who died there in 1982. Russ Maebus did illustrations for a number of covers for the Star Weekly Novel inserts which appeared in the weekend edition of that Toronto newspaper. 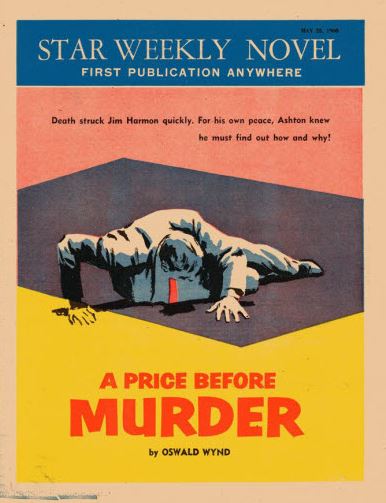 There are a couple of others that could be mentioned such as Frank Keith and Maurice Petersen but I should wind the column down here.

The Ex is on. Summer is closing down but, if you get a chance, come to my presentation at Fan Expo this Sunday that’s featuring Gerald Lazare. The panel presentation will be at 2pm on Sunday in Rm 716B. We are planning to have Gerry do a signing for about an hour at the Chapterhouse booth once our presentation is over. Get down to this if you can to meet Gerry who’s turning 90 next month and I’d love to meet any of you face to face and have a chat as well.